Thyroid cancer is cancer that develops from the tissues of the thyroid gland.[1] It is a disease in which cells grow abnormally and have the potential to spread to other parts of the body.[7][8] Symptoms can include swelling or a lump in the neck.[1] Cancer can also occur in the thyroid after spread from other locations, in which case it is not classified as thyroid cancer.[3]

Risk factors include radiation exposure at a young age, having an enlarged thyroid, and family history.[1][2] The four main types are papillary thyroid cancer, follicular thyroid cancer, medullary thyroid cancer, and anaplastic thyroid cancer.[3] Diagnosis is often based on ultrasound and fine needle aspiration.[1] Screening people without symptoms and at normal risk for the disease is not recommended as of 2017.[9]

Treatment options may include surgery, radiation therapy including radioactive iodine, chemotherapy, thyroid hormone, targeted therapy, and watchful waiting.[1] Surgery may involve removing part or all of the thyroid.[3] Five-year survival rates are 98% in the United States.[4]

Most often, the first symptom of thyroid cancer is a nodule in the thyroid region of the neck.[11] However, up to 65% of adults have small nodules in their thyroids, but typically under 10% of these nodules are found to be cancerous.[12] Sometimes, the first sign is an enlarged lymph node. Later symptoms that can be present are pain in the anterior region of the neck and changes in voice due to an involvement of the recurrent laryngeal nerve.

Thyroid cancer is usually found in a euthyroid patient, but symptoms of hyperthyroidism or hypothyroidism may be associated with a large or metastatic, well-differentiated tumor.

Thyroid nodules are of particular concern when they are found in those under the age of 20. The presentation of benign nodules at this age is less likely, thus the potential for malignancy is far greater.

Thyroid cancers are thought to be related to a number of environmental and genetic predisposing factors, but significant uncertainty remains regarding their causes.

Environmental exposure to ionizing radiation from both natural background sources and artificial sources is suspected to play a significant role, and significantly increased rates of thyroid cancer occur in those exposed to mantlefield radiation for lymphoma, and those exposed to iodine-131 following the Chernobyl,[13] Fukushima, Kyshtym, and Windscale[14] nuclear disasters.[15] Thyroiditis and other thyroid diseases also predispose to thyroid cancer.[14][16]

Genetic causes include multiple endocrine neoplasia type 2, which markedly increases rates, particularly of the rarer medullary form of the disease.[17] 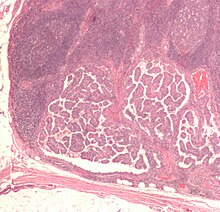 Micrograph of a lymph node with papillary thyroid carcinoma

After a thyroid nodule is found during a physical examination, a referral to an endocrinologist or a thyroidologist may occur. Most commonly, an ultrasound is performed to confirm the presence of a nodule and assess the status of the whole gland. Measurement of thyroid stimulating hormone and antithyroid antibodies will help decide if a functional thyroid disease such as Hashimoto's thyroiditis is present, a known cause of a benign nodular goiter.[18] Measurement of calcitonin is necessary to exclude the presence of medullary thyroid cancer. Finally, to achieve a definitive diagnosis before deciding on treatment, a fine needle aspiration cytology test is usually performed and reported according to the Bethesda system.

In adults without symptoms, screening for thyroid cancer is not recommended.[19]

Thyroid cancers can be classified according to their histopathological characteristics.[20][21] These variants can be distinguished (distribution over various subtypes may show regional variation):

The follicular and papillary types together can be classified as "differentiated thyroid cancer".[25] These types have a more favorable prognosis than the medullary and undifferentiated types.[26]

Cancer staging is the process of determining the extent of the development of a cancer. The TNM staging system is usually used to classify stages of cancers, but not of the brain.

Detection of any metastases of thyroid cancer can be performed with a full-body scintigraphy using iodine-131.[31][32]

Thyroid cancer can spread directly, via lymphatics or blood. Direct spread occurs through infiltration of the surrounding tissues. The tumor infiltrates into infrahyoid muscles, trachea, oesophagus, recurrent laryngeal nerve, carotid sheath, etc. The tumor then becomes fixed. Anaplastic carcinoma spreads mostly by direct spread, while papillary carcinoma spreads so the least. Lymphatic spread is most common in papillary carcinoma. Cervical lymph nodes become palpable in papillary carcinoma even when the primary tumor is unpalpable. Deep cervical nodes, pretracheal, prelaryngeal, and paratracheal groups of lymph nodes are often affected. The lymph node affected is usually the same side as that of the location of the tumor. Blood spread is also possible in thyroid cancers, especially in follicular and anaplastic carcinoma. The tumor emboli do angioinvasion of lungs; end of long bones, skull, and vertebrae are affected. Pulsating metastases occur because of their increased vascularity.[33]

Thyroidectomy and dissection of central neck compartment is initial step in treatment of thyroid cancer in the majority of cases.[11] Thyroid-preserving operations may be applied in cases, when thyroid cancer exhibits low biological aggressiveness (e.g. well-differentiated cancer, no evidence of lymph-node metastases, low MIB-1 index, no major genetic alterations like BRAF mutations, RET/PTC rearrangements, p53 mutations etc.) in patients younger than 45 years.[34] If the diagnosis of well-differentiated thyroid cancer (e.g. papillary thyroid cancer) is established or suspected by FNA, then surgery is indicated, whereas watchful waiting strategy is not recommended in any evidence-based guidelines.[34][35] Watchful waiting reduces overdiagnosis and overtreatment of thyroid cancer among old patients.[36]

Radioactive iodine-131 is used in people with papillary or follicular thyroid cancer for ablation of residual thyroid tissue after surgery and for the treatment of thyroid cancer.[37] Patients with medullary, anaplastic, and most Hurthle-cell cancers do not benefit from this therapy.[11]

External irradiation may be used when the cancer is unresectable, when it recurs after resection, or to relieve pain from bone metastasis.[11]

Sorafenib and lenvatinib are approved for advanced metastatic thyroid cancer.[38] Numerous agents are in phase II and III clinical trials.[38]

The prognosis of thyroid cancer is related to the type of cancer and the stage at the time of diagnosis. For the most common form of thyroid cancer, papillary, the overall prognosis is excellent. Indeed, the increased incidence of papillary thyroid carcinoma in recent years is likely related to increased and earlier diagnosis. One can look at the trend to earlier diagnosis in two ways. The first is that many of these cancers are small and not likely to develop into aggressive malignancies. A second perspective is that earlier diagnosis removes these cancers at a time when they are not likely to have spread beyond the thyroid gland, thereby improving the long-term outcome for the patient. No consensus exists at present on whether this trend toward earlier diagnosis is beneficial or unnecessary.

The argument against early diagnosis and treatment is based on the logic that many small thyroid cancers (mostly papillary) will not grow or metastasize. This view holds the overwhelming majority of thyroid cancers are overdiagnosed that is, will never cause any symptoms, illness, or death for the patient, even if nothing is ever done about the cancer. Including these overdiagnosed cases skews the statistics by lumping clinically significant cases in with apparently harmless cancers.[39] Thyroid cancer is incredibly common, with autopsy studies of people dying from other causes showing that more than one-third of older adults technically have thyroid cancer, which is causing them no harm.[39] Detecting nodules that might be cancerous is easy, simply by feeling the throat, which contributes to the level of overdiagnosis. Benign (noncancerous) nodules frequently co-exist with thyroid cancer; sometimes, a benign nodule is discovered, but surgery uncovers an incidental small thyroid cancer. Increasingly, small thyroid nodules are discovered as incidental findings on imaging (CT scan, MRI, ultrasound) performed for another purpose; very few of these people with accidentally discovered, symptom-free thyroid cancers will ever have any symptoms, and treatment in such patients has the potential to cause harm to them, not to help them.[39][40]

Thyroid cancer is three times more common in women than in men, but according to European statistics,[41] the overall relative 5-year survival rate for thyroid cancer is 85% for females and 74% for males.[42]

The table below highlights some of the challenges with decision making and prognostication in thyroid cancer. While general agreement exists that stage I or II papillary, follicular, or medullary cancer have good prognoses, when evaluating a small thyroid cancer to determine which ones will grow and metastasize and which will not is not possible. As a result, once a diagnosis of thyroid cancer has been established (most commonly by a fine needle aspiration), a total thyroidectomy likely will be performed.

This drive to earlier diagnosis has also manifested itself on the European continent by the use of serum calcitonin measurements in patients with goiter to identify patients with early abnormalities of the parafollicular or calcitonin-producing cells within the thyroid gland. As multiple studies have demonstrated, the finding of an elevated serum calcitonin is associated with the finding of a medullary thyroid carcinoma in as high as 20% of cases.

In Europe where the threshold for thyroid surgery is lower than in the United States, an elaborate strategy that incorporates serum calcitonin measurements and stimulatory tests for calcitonin has been incorporated into the decision to perform a thyroidectomy; thyroid experts in the United States, looking at the same data, have for the most part not incorporated calcitonin testing as a routine part of their evaluations, thereby eliminating a large number of thyroidectomies and the consequent morbidity. The European thyroid community has focused on prevention of metastasis from small medullary thyroid carcinomas; the North American thyroid community has focused more on prevention of complications associated with thyroidectomy (see American Thyroid Association guidelines below). As demonstrated in the table below, individuals with stage III and IV disease have a significant risk of dying from thyroid cancer. While many present with widely metastatic disease, an equal number evolve over years and decades from stage I or II disease. Physicians who manage thyroid cancer of any stage recognize that a small percentage of patients with low-risk thyroid cancer will progress to metastatic disease.

Improvements have been made in thyroid cancer treatment during recent years. The identification of some of the molecular or DNA abnormalities has led to the development of therapies that target these molecular defects. The first of these agents to negotiate the approval process is vandetanib, a tyrosine kinase inhibitor that targets the RET proto-oncogene, two subtypes of the vascular endothelial growth factor receptor, and the epidermal growth factor receptor.[43] More of these compounds are under investigation and are likely to make it through the approval process. For differentiated thyroid carcinoma, strategies are evolving to use selected types of targeted therapy to increase radioactive iodine uptake in papillary thyroid carcinomas that have lost the ability to concentrate iodide. This strategy would make possible the use of radioactive iodine therapy to treat "resistant" thyroid cancers. Other targeted therapies are being evaluated, making life extension possible over the next 5–10 years for those with stage III and IV thyroid cancer.

Prognosis is better in younger people than older ones.[42]

Prognosis depends mainly on the type of cancer and cancer stage.

Thyroid cancer accounts for less than 1% of cancer cases and deaths in the UK. Around 2,700 people were diagnosed with thyroid cancer in the UK in 2011, and around 370 people died from the disease in 2012.[51]