Vascular dementia (VaD) is long-term, progressive cognitive decline due to insufficient blood flow to the brain.[2] It can effect memory, executive function, spatial abilities, language, or attention.[2] Onset may be gradual, sudden, or stepwise in nature.[2] Other symptoms may include paranoia and hallucinations.[2] Complications may include falls, aspiration pneumonia, and pressure sores.[2] Associated condition may include heart disease.[2]

Risk factors include hyperlipidemia, high blood pressure, diabetes, and tobacco use.[2] The underlying mechanism may involved atherosclerosis, thrombosis, or vasculopathy.[2] Diagnosis often requiring speaking with the people who support the affected person and may be supported by cognitive testing and medical imaging.[2][1] Other causes should be ruled out.[2]

There is no cure.[2] Treatment involves preventing worsening by addressing risk factors and efforts to improve behavior.[2] Cholinesterase inhibitors or memantine may help.[2] In those with evidence of a stroke, aspirin, warfarin, or carotid endarterectomy may help.[2] Life expectancy is shortened.[2]

Vascular dementia represents about 16% of dementia cases, being the second most common cause after Alzheimer's.[2][3] It becomes more common with age, with a typical onset between 60 and 75.[2][1] Males are more commonly affected than females.[1] That strokes can result in dementia has been described since the 1800s.[4]

Differentiating dementia syndromes can be challenging, due to the frequently overlapping clinical features and related underlying pathology. In particular, Alzheimer's dementia often co-occurs with vascular dementia.[5]

People with vascular dementia present with progressive cognitive impairment, acutely or subacutely as in mild cognitive impairment, frequently step-wise, after multiple cerebrovascular events (strokes). Some people may appear to improve between events and decline after further silent strokes. A rapidly deteriorating condition may lead to death from a stroke, heart disease, or infection.[6]

Signs and symptoms are cognitive, motor, behavioral, and for a significant proportion of patients also affective. These changes typically occur over a period of 5–10 years. Signs are typically the same as in other dementias, but mainly include cognitive decline and memory impairment of sufficient severity as to interfere with activities of daily living, sometimes with presence of focal neurologic signs, and evidence of features consistent with cerebrovascular disease on brain imaging (CT or MRI).[7] The neurologic signs localizing to certain areas of the brain that can be observed are hemiparesis, bradykinesia, hyperreflexia, extensor plantar reflexes, ataxia, pseudobulbar palsy, as well as gait problems and swallowing difficulties. People have patchy deficits in terms of cognitive testing. They tend to have better free recall and fewer recall intrusions when compared with patients with Alzheimer's disease. In the more severely affected patients, or patients affected by infarcts in Wernicke's or Broca's areas, specific problems with speaking called dysarthrias and aphasias may be present.

In small vessel disease, the frontal lobes are often affected. Consequently, patients with vascular dementia tend to perform worse than their Alzheimer's disease counterparts in frontal lobe tasks, such as verbal fluency, and may present with frontal lobe problems: apathy, abulia (lack of will or initiative), problems with attention, orientation, and urinary incontinence. They tend to exhibit more perseverative behavior. VaD patients may also present with general slowing of processing ability, difficulty shifting sets, and impairment in abstract thinking. Apathy early in the disease is more suggestive of vascular dementia.

Rare genetic disorders that cause vascular lesions in the brain have other presentation patterns. As a rule, they tend to occur earlier in life and have a more aggressive course. In addition, infectious disorders, such as syphilis, can cause arterial damage, strokes, and bacterial inflammation of the brain.

Vascular dementia can be caused by ischemic or hemorrhagic infarcts affecting multiple brain areas, including the anterior cerebral artery territory, the parietal lobes, or the cingulate gyrus. On rare occasion, infarcts in the hippocampus or thalamus are the cause of dementia.[8] A history of stroke increases the risk of developing dementia by around 70%, and recent stroke increases the risk by around 120%.[9] Brain vascular lesions can also be the result of diffuse cerebrovascular disease, such as small vessel disease.[citation needed]

Vascular dementia can sometimes be triggered by cerebral amyloid angiopathy, which involves accumulation of beta amyloid plaques in the walls of the cerebral arteries, leading to breakdown and rupture of the vessels. Since amyloid plaques are a characteristic feature of Alzheimer's disease, vascular dementia may occur as a consequence. Cerebral amyloid angiopathy can, however, appear in people with no prior dementia condition. Amyloid beta accumulation is often present in cognitively normal elderly people.[11][12]

Two reviews of 2018 and 2019 found potentially an association between celiac disease and vascular dementia.[13][14] 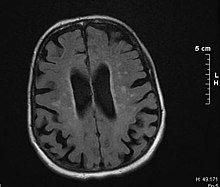 The recommended investigations for cognitive impairment include: blood tests (for anemia, vitamin deficiency, thyrotoxicosis, infection, etc.), chest X-Ray, ECG, and neuroimaging, preferably a scan with a functional or metabolic sensitivity beyond a simple CT or MRI. When available as a diagnostic tool, single photon emission computed tomography (SPECT) and positron emission tomography (PET) neuroimaging may be used to confirm a diagnosis of multi-infarct dementia in conjunction with evaluations involving mental status examination.[18] In a person already having dementia, SPECT appears to be superior in differentiating multi-infarct dementia from Alzheimer's disease, compared to the usual mental testing and medical history analysis.[19] Advances have led to the proposal of new diagnostic criteria.[20][21]

Mixed dementia is diagnosed when people have evidence of Alzheimer's disease and cerebrovascular disease, either clinically or based on neuro-imaging evidence of ischemic lesions.

Gross examination of the brain may reveal noticeable lesions and damage to blood vessels. Accumulation of various substances such as lipid deposits and clotted blood appear on microscopic views. The white matter is most affected, with noticeable atrophy (tissue loss), in addition to calcification of the arteries. Microinfarcts may also be present in the gray matter (cerebral cortex), sometimes in large numbers. Although atheroma of the major cerebral arteries is typical in vascular dementia, smaller vessels and arterioles are mainly affected.

Early detection and accurate diagnosis are important,[22] as vascular dementia is at least partially preventable. Ischemic changes in the brain are irreversible, but the patient with vascular dementia can demonstrate periods of stability or even mild improvement.[23] Since stroke is an essential part of vascular dementia,[9] the goal is to prevent new strokes. This is attempted through reduction of stroke risk factors, such as high blood pressure, high blood lipid levels, atrial fibrillation, or diabetes mellitus. Meta-analyses have found that medications for high blood pressure are effective at prevention of pre-stroke dementia, which means that high blood pressure treatment should be started early.[24] These medications include angiotensin converting enzyme inhibitors, diuretics, calcium channel blockers, sympathetic nerve inhibitors, angiotensin II receptor antagonists or adrenergic antagonists. Elevated lipid levels, including HDL, were found to increase risk of vascular dementia. However, six large recent reviews showed that therapy with statin drugs was ineffective in treatment or prevention of this dementia.[24][25] Aspirin is a medication that is commonly prescribed for prevention of strokes and heart attacks; it is also frequently given to patients with dementia. However, its efficacy in slowing progression of dementia or improving cognition has not been supported by studies.[24][26] Smoking cessation and Mediterranean diet have not been found to help patients with cognitive impairment; physical activity was consistently the most effective method of preventing cognitive decline.[24]

Currently, there are no medications that have been approved specifically for prevention or treatment of vascular dementia. The use of medications for treatment of Alzheimer's dementia, such as cholinesterase inhibitors and memantine, has shown small[quantify] improvement of cognition in vascular dementia. This is most likely due to the drugs' actions on co-existing AD-related pathology. Multiple studies found a small[quantify] benefit in VaD treatment with: memantine, a non-competitive N-methyl-D-aspartate (NMDA) receptor antagonist; cholinesterase inhibitors galantamine, donepezil, rivastigmine;[27] and ginkgo biloba extract.[24]

In those with celiac disease or non-celiac gluten sensitivity, a strict gluten-free diet may relieve symptoms of mild cognitive impairment.[14][13] It should be started as soon as possible. There is no evidence that a gluten free diet is useful against advanced dementia. People with no digestive symptoms are less likely to receive early diagnosis and treatment.[14]

Many studies have been conducted to determine average survival of patients with dementia. The studies were frequently small and limited, which caused contradictory results in the connection of mortality to the type of dementia and the patient's gender. A very large study conducted in Netherlands in 2015 found that the one-year mortality was three to four times higher in patients after their first referral to a day clinic for dementia, when compared to the general population.[28] If the patient was hospitalized for dementia, the mortality was even higher than in patients hospitalized for cardiovascular disease.[28] Vascular dementia was found to have either comparable or worse survival rates when compared to Alzheimer's Disease;[29][30][31] another very large 2014 Swedish study found that the prognosis for VaD patients was worse for male and older patients.[32]

Unlike Alzheimer's disease, which weakens the patient, causing them to succumb to bacterial infections like pneumonia, vascular dementia can be a direct cause of death due to the possibility of a fatal interruption in the brain's blood supply.

Vascular dementia is the second-most-common form of dementia after Alzheimer's disease (AD) in older adults.[33][34] The prevalence of the illness is 1.5% in Western countries and approximately 2.2% in Japan. It accounts for 50% of all dementias in Japan, 20% to 40% in Europe and 15% in Latin America. 25% of stroke patients develop new-onset dementia within one year of their stroke. One study found that in the United States, the prevalence of vascular dementia in all people over the age of 71 is 2.43%, and another found that the prevalence of the dementias doubles with every 5.1 years of age.[35][36] The incidence peaks between the fourth and the seventh decades of life and 80% of patients have a history of hypertension.

A recent meta-analysis identified 36 studies of prevalent stroke (1.9 million participants) and 12 studies of incident stroke (1.3 million participants).[9] For prevalent stroke, the pooled hazard ratio for all-cause dementia was 1.69 (95% confidence interval: 1.49–1.92; P < .00001; I2 = 87%). For incident stroke, the pooled risk ratio was 2.18 (95% confidence interval: 1.90–2.50; P < .00001; I2 = 88%). Study characteristics did not modify these associations, with the exception of sex, which explained 50.2% of between-study heterogeneity for prevalent stroke. These results confirm that stroke is a strong, independent, and potentially modifiable risk factor for all-cause dementia.