Vaginismus is a condition in which involuntary muscle spasm prevents vaginal penetration.[2] This often results in pain with attempts at sex.[2] Often it begins when vaginal intercourse is first attempted.[3]

The underlying cause is generally a fear that penetration will hurt.[3] Risk factors include a history of sexual assault, endometriosis, vaginitis, or a prior episiotomy.[2] Diagnosis is based on the symptoms and examination.[2] It requires there to be no anatomical or physical problems and a desire for penetration on the part of the woman.[3][6]

Treatment may include behavior therapy such as graduated exposure therapy and gradual vaginal dilatation.[2][3] Surgery is not generally indicated.[5] Botulinum toxin (botox) is being studied.[2] Estimates of how common the condition is vary.[7] One textbook estimates that 0.5% of women are affected.[2] Outcomes are generally good with treatment.[5]

Vaginismus occurs when penetrative sex or other vaginal penetration cannot be experienced without pain. It is commonly discovered among teenage girls and women in their early twenties, as this is when many girls and young women first attempt to use tampons, have penetrative sex, or undergo a Pap smear. Awareness of vaginismus may not happen until vaginal penetration is attempted. Reasons for the condition may be unknown.[9]

A few of the main factors that may contribute to primary vaginismus include:

Primary vaginismus is often unknown cause.[13]

Vaginismus has been classified by Lamont[14] according to the severity of the condition. Lamont describes four degrees of vaginismus: In first degree vaginismus, the person has spasm of the pelvic floor that can be relieved with reassurance. In second degree, the spasm is present but maintained throughout the pelvis even with reassurance. In third degree, the person elevates the buttocks to avoid being examined. In fourth degree vaginismus (also known as grade 4 vaginismus), the most severe form of vaginismus, the person elevates the buttocks, retreats and tightly closes the thighs to avoid examination. Pacik expanded the Lamont classification to include a fifth degree in which the person experiences a visceral reaction such as sweating, hyperventilation, palpitations, trembling, shaking, nausea, vomiting, losing consciousness, wanting to jump off the table, or attacking the doctor.[15]

Although the pubococcygeus muscle is commonly thought to be the primary muscle involved in vaginismus, Pacik identified two additionally-involved spastic muscles in people who were treated under sedation. These include the entry muscle (bulbocavernosum) and the mid-vaginal muscle (puborectalis). Spasm of the entry muscle accounts for the common complaint that people often report when trying to have intercourse: "It's like hitting a brick wall".[9]

Secondary vaginismus occurs when a person who has previously been able to achieve penetration develops vaginismus. This may be due to physical causes such as a yeast infection or trauma during childbirth, while in some cases it may be due to psychological causes, or to a combination of causes. The treatment for secondary vaginismus is the same as for primary vaginismus, although, in these cases, previous experience with successful penetration can assist in a more rapid resolution of the condition. Peri-menopausal and menopausal vaginismus, often due to a drying of the vulvar and vaginal tissues as a result of reduced estrogen, may occur as a result of "micro-tears" first causing sexual pain then leading to vaginismus.[16]

Specific muscle involvement is unclear, but the condition may involve the pubococcygeus muscle, levator ani, bulbocavernosus, circumvaginal, or perivaginal muscles.[7]

The diagnosis of vaginismus, as well as other diagnoses of female sexual dysfunction, can be made when "symptoms are sufficient to result in personal distress."[17] The DSM-IV-TR defines vaginismus as "recurrent or persistent involuntary spasm of the musculature of the outer third of the vagina that interferes with sexual intercourse, causing marked distress or interpersonal difficulty".[17]

The formal diagnostic criteria specifically requires interference during vaginal intercourse and a desire for intercourse. However, the term vaginismus is sometimes used more broadly to refer to any muscle spasms occurring during the insertion of some or all types of objects into the vagina, sexually motivated or otherwise, including the usage of speculums and tampons.[18][19]

A Cochrane review found little high quality evidence regarding the treatment of vaginismus in 2012.[20] Specifically it is unclear if systematic desensitisation is better than other measures including nothing.[20]

According to a 2011 study those with vaginismus are twice as likely to have a history of childhood sexual interference and held less positive attitudes about their sexuality, whereas no correlation was noted for lack of sexual knowledge or (non-sexual) physical abuse.[21] 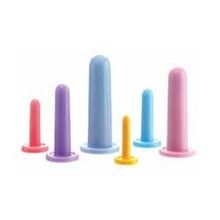 Often, when faced with a person experiencing painful intercourse, a gynecologist will recommend Kegel exercises and provide some additional lubricants.[22][23][24][25] Strengthening the muscles that unconsciously tighten during vaginismus may be extremely counter-intuitive for some people. Although vaginismus has not been shown to affect a person's ability to produce lubrication, providing additional lubricant can be helpful in achieving successful penetration. This is due to the fact that women may not produce natural lubrication if anxious or in pain. Treatment of vaginismus may involve the use Hegar dilators, (sometimes called vaginal trainers) progressively increasing the size of the dilator inserted into the vagina.[26][27]

Botulinum toxin A (Botox) has been considered as a treatment option, under the idea of temporarily reducing the hypertonicity of the pelvic floor muscles. Although no random controlled trials have been done with this treatment, experimental studies with small samples have shown it to be effective, with sustained positive results through 10 months.[7][28] Similar in its mechanism of treatment, lidocaine has also been tried as an experimental option.[7][29]

Anxiolytics and antidepressants are other pharmacotherapies that have been offered to people in conjunction with other psychotherapy modalities, or if these people's experience high levels of anxiety from their condition.[7] Evidence for these medications; however, is limited.[7]

Estimates of how common the condition is vary.[7] A 2016 textbook estimated about 0.5% of women are affected.[2] While rates in Morocco and Sweden were estimated at 6%.[30]