Herpesviral encephalitis is inflammation of the brain due to the herpes simplex virus.[1] Symptoms commonly include headache, fever, confusion, and weakness.[1] Less commonly neck stiffness and abnormal speech may occur.[1] Onset is generally over a couple of days.[1] Complications can include seizures, diabetes insipidus, and autoimmune encephalitis.[4][2]

It most commonly occurs due to herpes simplex virus-1 (HSV-1), with less than 10% of cases due to herpes simplex virus-2 (HSV-2).[1][4] About a third of cases occur as an initial infection, while two thirds occur as a recurrence; though only 10% have a history of cold sores.[3] Diagnosis is generally based on symptoms, supported by cerebral spinal fluid analysis and MRI.[2]

Treatment is with acyclovir.[2] Anticonvulsants may be used to decrease the risk of seizures.[1] The disease is most severe in the young and the old.[4] About 20% experience significant long term disability.[4] The risk of death is between 1% and 8%.[2]

Herpesviral encephalitis is rare, affects about 1 in 100,000 newborns, 1 in 400,000 children, and 1 in 150,000 adults in the United States.[2][1] Males and females are affected with similar frequencies.[1] About half of cases develop in those over the age of 50.[5] It is the most common cause of infectious encephalitis in the developed world.[2] The disease was first described in humans in 1935.[6]

Most individuals with HSE show a decrease in their level of consciousness and an altered mental state presenting as confusion, and changes in personality. People typically have a fever[3] and may have seizures. The electrical activity of the brain changes as the disease progresses, first showing abnormalities in one temporal lobe of the brain, which spread to the other temporal lobe 7–10 days later.[3]

HSE is thought to be caused by the transmission of virus from a peripheral site on the face following HSV-1 reactivation, along a nerve axon, to the brain.[3] The virus lies dormant in the ganglion of the trigeminal cranial nerve, but the reason for reactivation, and its pathway to gain access to the brain, remains unclear, though changes in the immune system caused by stress clearly play a role in animal models of the disease. The olfactory nerve may also be involved in HSE,[9] which may explain its predilection for the temporal lobes of the brain, as the olfactory nerve sends branches there. In horses, a single-nucleotide polymorphism is sufficient to allow the virus to cause neurological disease;[10] but no similar mechanism has been found in humans. 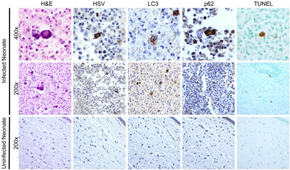 Increased numbers of white blood cells can be found in person's cerebrospinal fluid, without the presence of pathogenic bacteria and fungi. Definite diagnosis requires testing of the cerebrospinal fluid (CSF) by a lumbar puncture (spinal tap) for presence of the virus. The testing takes several days to perform.

Treatment is with acyclovir at a dose of 10 mg/kg (adult) by injection three times per day for 14 days.[2] Without treatment, HSE results in rapid death in approximately 70% of cases; survivors suffer severe neurological damage.[3] When treated, HSE is still fatal in one-third of cases, and causes serious long-term neurological damage in over half of survivors. Twenty percent of treated patients recover with minor damage. Only a small population of untreated survivors (2.5%) regain completely normal brain function.[5] Many amnesic cases in the scientific literature have etiologies involving HSE.

Earlier treatment (within 48 hours of symptom onset) improves the chances of a good recovery. Rarely, treated individuals can have relapse of infection weeks to months later. There is evidence that aberrant inflammation triggered by herpes simplex can result in granulomatous inflammation in the brain, which responds to steroids.[11] While the herpes virus can be spread, encephalitis itself is not infectious. Other viruses can cause similar symptoms of encephalitis, though usually milder (Herpesvirus 6, varicella zoster virus, Epstein-Barr, cytomegalovirus, coxsackievirus, etc.).[citation needed]