There is no cure.[8] Management may require social supports, behavioral therapy, and speech therapy.[4] Other efforts to improve symptoms may include SSRIs, antipsychotics, and galantamine.[8] A number of treatments are under study.[4] The average life expectancy is 7.5 years after diagnosis.[4]

Frontotemporal dementia (FTD) is an early-onset disorder that mostly occurs before the age of 65 but can begin earlier, and in 20%-25% of cases onset is later.[11][12] It is the most common early presenting dementia.[13] A gradual onset and progression of changes in behavior or language deficits are reported to have begun several years prior to presentation to a neurologist.[5]

FTD is traditionally difficult to diagnose owing to the diverse nature of the associated symptoms. Signs and symptoms are classified into three groups based on the affected functions of the frontal and temporal lobes:[8] These are behavioural variant frontotemporal dementia, semantic dementia, and progressive nonfluent aphasia. An overlap between symptoms can occur as the disease progresses and spreads through the brain regions.[12]

In later stages of FTD, the clinical phenotypes may overlap.[14] People with FTD tend to struggle with binge eating and compulsive behaviors.[15] Binge eating habits are often associated with changes in food preferences (cravings for more sweets, carbohydrates), eating inedible objects and snatching food from others. Recent findings from structural MRI research have indicated that eating changes in FTD are associated with atrophy (wasting) in the right ventral insula, striatum, and orbitofrontal cortex.[15]

People with FTD show marked deficiencies in executive functioning and working memory.[16] Most become unable to perform skills that require complex planning or sequencing.[17] In addition to the characteristic cognitive dysfunction, a number of primitive reflexes known as frontal release signs are often able to be elicited. Usually the first of these frontal release signs to appear is the palmomental reflex which appears relatively early in the disease course whereas the palmar grasp reflex and rooting reflex appear late in the disease course.[citation needed]

In rare cases, FTD can occur in people with amyotrophic lateral sclerosis (ALS) a motor neuron disease. The prognosis for people with ALS is worse when combined with FTD, shortening survival by about a year.[18]

A higher proportion of fontotemporal dementias seem to have a familial component than other neurodegenerative diseases such as Alzheimer's disease. More and more mutations and genetic variants are being identified all the time, needing constant updating of genetic influences.

There are three main histological subtypes found at post-mortem: FTLD-tau, FTLD-TDP, and FTLD-FUS. In rare cases, patients with clinical FTD were found to have changes consistent with Alzheimer's disease on autopsy.[23] The most severe brain atrophy appears to be associated with behavioral variant FTD, and corticobasal degeneration.[24]

With regard to the genetic defects that have been found, repeat expansion in the C9orf72 gene is considered a major contribution to frontotemporal lobar degeneration, although defects in the GRN and MAPT genes are also associated with it.[25] 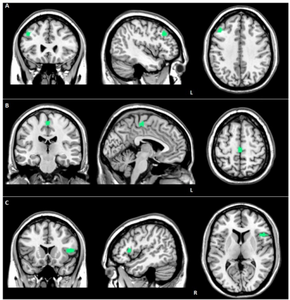 Structural MRI scans often reveal frontal lobe and/or anterior temporal lobe atrophy but in early cases the scan may seem normal. Atrophy can be either bilateral or asymmetric.[26] Registration of images at different points of time (e.g., one year apart) can show evidence of atrophy that otherwise (at individual time points) may be reported as normal. Many research groups have begun using techniques such as magnetic resonance spectroscopy, functional imaging and cortical thickness measurements in an attempt to offer an earlier diagnosis to the FTD patient. Fluorine-18-fluorodeoxyglucose positron emission tomography (FDG-PET) scans classically show frontal and/or anterior temporal hypometabolism, which helps differentiate the disease from Alzheimer's disease. The PET scan in Alzheimer's disease classically shows biparietal hypometabolism. Meta-analyses based on imaging methods have shown that frontotemporal dementia mainly affects a frontomedial network discussed in the context of social cognition or 'theory of mind'.[27] This is entirely in keeping with the notion that on the basis of cognitive neuropsychological evidence, the ventromedial prefrontal cortex is a major locus of dysfunction early on in the course of the behavioural variant of frontotemporal degeneration.[28] The language subtypes of frontotemporal lobar degeneration (semantic dementia and progressive nonfluent aphasia) can be regionally dissociated by imaging approaches in vivo.[29]

The confusion between Alzheimer's and FTD is justifiable due to the similarities between their initial symptoms. Patients do not have difficulty with movement and other motor tasks.[30] As FTD symptoms appear, it is difficult to differentiate between a diagnosis of Alzheimer's disease and FTD. There are distinct differences in the behavioral and emotional symptoms of the two dementias, notably, the blunting of emotions seen in FTD patients.[26] In the early stages of FTD, anxiety and depression are common, which may result in an ambiguous diagnosis. However, over time, these ambiguities fade away as this dementia progresses and defining symptoms of apathy, unique to FTD, start to appear.[citation needed]

Recent studies over several years have developed new criteria for the diagnosis of behavioral variant frontotemporal dementia (bvFTD).The confirmatory diagnosis is made by brain biopsy, but other tests can be used to help, such as MRI, EEG, CT, and physical examination and history.[31] Six distinct clinical features have been identified as symptoms of bvFTD.[32]

Of the six features, three must be present in a patient to diagnose one with possible bvFTD. Similar to standard FTD, the primary diagnosis stems from clinical trials that identify the associated symptoms, instead of imaging studies.[32] The above criteria are used to distinguish bvFTD from disorders such as Alzheimer's and other causes of dementia. In addition, the new criteria allow for a diagnostic hierarchy distinguished possible, probable, and definite bvFTD based on the number of symptoms present.[citation needed]

The progression of the degeneration caused by bvFTD may follow a predictable course. The degeneration begins in the orbitofrontal cortex and medial aspects such as ventromedial cortex. In later stages, it gradually expands its area to the dorsolateral cortex and the temporal lobe.[33] Thus, the detection of dysfunction of the orbitofrontal cortex and ventromedial cortex is important in the detection of early stage bvFTD. As stated above, a behavioural change may occur before the appearance of any atrophy in the brain in the course of the disease. Because of that, image scanning such as MRI can be insensitive to the early degeneration and it is difficult to detect early-stage bvFTD.[citation needed]

Faux Pas Recognition test is intended to measure one’s ability to detect faux pas types of social blunders (accidentally make a statement or an action that offends others). It is suggested that people with orbitofrontal cortex dysfunction show a tendency to make social blunders due to a deficit in self-monitoring.[35] Self-monitoring is the ability of individuals to evaluate their behaviour to make sure that their behaviour is appropriate in particular situations. The impairment in self-monitoring leads to a lack of social emotion signals. The social emotions such as embarrassment are important in the way that they signal the individual to adapt social behaviour in an appropriate manner to maintain relationships with others. Though patients with damage to the OFC retain intact knowledge of social norms, they fail to apply it to actual behaviour because they fail to generate social emotions that promote adaptive social behaviour.[35]

The other test, the Iowa gambling task, is a psychological test intended to simulate real-life decision making. The underlying concept of this test is the somatic marker hypothesis. This hypothesis argues that when people have to make complex uncertain decisions, they employ both cognitive and emotional processes to assess the values of the choices available to them. Each time a person makes a decision, both physiological signals and evoked emotion (somatic marker) are associated with their outcomes and it accumulates as experience. People tend to choose the choice which might produce the outcome reinforced with positive stimuli, thus it biases decision-making towards certain behaviours while avoiding others.[36] It is thought that somatic marker is processed in orbitofrontal cortex.[citation needed]

In order to solve this problem, some researchers combined neuropsychological tests which detect the dysfunction of orbitofrontal cortex into one so that it increases its specificity to the degeneration of the frontal lobe in order to detect the early-stage bvFTD. They invented the Executive and Social Cognition Battery which comprises five neuropsychological tests.[34]

The result has shown that this combined test is more sensitive in detecting the deficits in early bvFTD.[34]

Behavioral variant frontotemporal dementia (BvFTD) was previously known as Pick's disease, and is the most common of the FTD types.[10] BvFTD is diagnosed four times more than the PPA variants.[37] Behavior can change in BvFTD in either of two ways — it can change to being impulsive and disinhibited, acting in socially unacceptable ways; or it can change to being listless and apathetic.[38][14] About 12-13% of people with bvFTD develop motor neuron disease.[39]

The Pick bodies in behavioral variant FTD are spherical inclusion bodies found in the cytoplasm of affected cells. They consist of tau fibrils as a major component together with a number of other protein products including ubiquitin and tubulin.[40]

Semantic dementia (SD) is characterized by the loss of semantic understanding, resulting in impaired word comprehension. However, speech remains fluent and grammatical.[14]

Neuronal intermediate filament inclusion disease (NIFID) is a rare distinct variant. The inclusion bodies that are present in NIFID are cytoplasmic and made up of type IV intermediate filaments.[41][42] NIFID has an early age of onset between 23–56. Symptoms can include behavioural, and personality changes, memory and cognitive impairments, language difficulties, motor weakness, and extrapyramidal symptoms.[41] NIFID is one of the FTLD-FUS proteopathies.[42] Imaging commonly shows atrophy in the frontotemporal region, and in part of the striatum in the basal ganglia. Post-mortem studies show a marked reduction in the caudate nucleus of the striatum; frontal temporal gyri are narrowed with widened intervening sulci, and the lateral ventricles are enlarged.[41]

Currently, there is no cure for FTD. Treatments are available to manage the behavioral symptoms. Disinhibition and compulsive behaviors can be controlled by selective serotonin reuptake inhibitors (SSRIs).[44][45] Although Alzheimer's and FTD share certain symptoms, they cannot be treated with the same pharmacological agents because the cholinergic systems are not affected in FTD.[26]

Because FTD often occurs in younger people (i.e. in their 40s or 50s), it can severely affect families. Patients often still have children living in the home.[citation needed]

Symptoms of frontotemporal dementia progress at a rapid, steady rate. Patients suffering from the disease can survive for 2–20 years. Eventually patients will need 24-hour care for daily function.[46]

CSF leaks are a known cause of reversible frontotemporal dementia.[47]

Frontotemporal dementia was first described by Pick in 1892.[48] In 1989, Snowden suggested the term “semantic dementia” to describe the patient with predominant left temporal atrophy and aphasia that Pick described. The first research criteria for FTD “Clinical and neuropathological criteria for frontotemporal dementia. The Lund and Manchester Groups,” was developed in 1994. The clinical diagnostic criteria were revised in the late 1990s, when the FTD spectrum was divided into a behavioral variant, a nonfluent aphasia variant and a semantic dementia variant.[37] The most recent revision of the clinical research criteria was by International Behavioural Variant FTD Criteria Consortium (FTDC) in 2011.[49]

Notable cases of bvFTD when mostly were referred to as Pick's disease.