From WikiProjectMed
Jump to navigation Jump to search
Not to be confused with Nutcracker syndrome.

Jackhammer esophagus, previously known as nutcracker esophagus, is a condition in which there is excessively strong contractions of the esophagus.[1] Symptoms may include difficulty swallowing, regurgitation, heart burn, and chest pain.[3] Complications may rarely include achalasia.[1]

The cause is unknown.[3] Risk factors include obesity and GERD.[3] While the esophageal contractions are excessive in strength, they remain coordinated.[2] Diagnosis is by esophageal manometry finding a distal contractile integral of more than 8,000 mmHg*s*cm or pressures exceeding 220 mmHg.[2] It is a type of esophageal motility disorder, along with achalasia and diffuse esophageal spasm.[2]

Jackhammer esophagus is rare.[1] It primarily affects those over the age of 60.[1] Males and females are affected equally frequently.[4] The condition was first described in the 1970s.[4] The term "nutcracker esophagus" comes from the increased pressures being likened to that created by a mechanical nutcracker.[5] 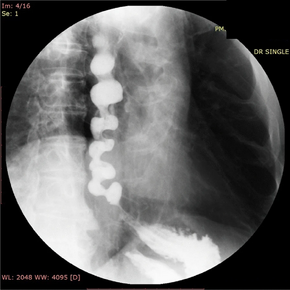 Barium esophagogram showed a constricted and curling of the esophageal lumen resembling a corkscrew.[15]

Nutcracker esophagus is characterized by a number of criteria described in the literature. The most commonly used criteria are the Castell criteria, named after American gastroenterologist D.O. Castell. The Castell criteria include one major criterion: a mean peristaltic amplitude in the distal esophagus of more than 180 mm Hg. The minor criterion is the presence of repetitive contractions (meaning two or more) that are greater than six seconds in duration. Castell also noted that the lower esophageal sphincter relaxes normally in nutcracker esophagus, but has an elevated pressure of greater than 40 mm Hg at baseline.[6][18][19][14]

People are usually reassured that the disease is unlikely to worsen. However, the symptoms of chest pain and trouble swallowing may be severe enough to require treatment with medications, and rarely, surgery.

The initial step of treatment focuses on reducing risk factors. While weight reduction may be useful in reducing symptoms, the role of acid suppression therapy to reduce esophageal reflux is still uncertain.[21] Very cold and very hot beverages may trigger esophageal spasms.[22][23]

Medications for nutcracker esophagus includes the use of calcium-channel blockers, which relax the lower esophageal sphincter (LES) and palliate the dysphagia symptoms. Diltiazem, a calcium-channel blocker, has been used in randomized control studies with good effect. Nitrate medications, including isosorbide dinitrate, given before meals, may also help relax the LES and improve symptoms.[6] The inexpensive generic combination of belladonna and phenobarbital (Donnatal and other brands) may be taken three times daily as a tablet to prevent attacks or, for patients with only occasional episodes, as an elixir at the onset of symptoms. Phosphodiesterase inhibitors, such as sildenafil, can be given to reduce symptoms, particularly pain, but small trials have not been able to demonstrate clinical improvement.[24][25]

Endoscopic therapy with botulinum toxin can also be used to improve dysphagia which stabilizes unintentional weight loss, but the effect has limited effect on other symptoms, including pain, while also being a temporary treatment lasting a few weeks.[26] Finally, pneumatic dilatation of the esophagus, which is an endoscopic technique where a high-pressure balloon is used to stretch the muscles of the LES, can be performed to improve symptoms, but again no clinical improvement is seen in regards to motility.[27]

In people who have no response to medical or endoscopic therapy, surgery can be performed. A Heller myotomy involves an incision to disrupt the LES and the myenteric plexus that innervates it. The Heller myotomy is used as a final treatment option in patients who do not respond to other therapies.[28]

Nutcracker esophagus is a benign, nonprogressive condition, meaning it is not associated with significant complications.