Pica is a disorder characterized by the appetite for and eating of substances that are not considered food.[2] Generally the craving are for a few specific items such as soil, raw potatoes, ice, hair, or paint.[4] Often few signs are present though abdominal pain may occasionally occur.[2] Pica may lead to lead poisoning, gastrointestinal obstruction, low red blood cells, or parasitic infections.[2]

Pica is associated with pregnancy, iron deficiency, other mental disorders, poverty, malnutrition, and emotional trauma.[2][5] A formal diagnosis requires behaviors to persist for at least a month and be inappropriate for a persons age and culture.[2] To make the diagnosis the person most also be at least two years old.[3]

In children who are otherwise normal, pica while generally resolve with education around what is appropriate to eat.[2] Counselling, including behavioral therapy, may also be useful.[2] If iron deficiency is present this should be treated.[2]

Pica effects up to 30% of children and pregnant women.[2] In children it occurs most frequently in those between 18 months and 6 years of age.[2] Described of pica date back more than 2,000 years to Hippocrates.[5][6] The term is named for the common magpie (Pica pica) which eats unusual objects.[2] 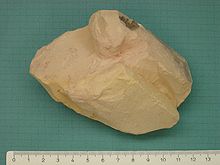 Pica is the consumption of substances with no significant nutritional value such as soil, soap, or ice.[7] Subtypes are characterized by the substance eaten:[8]

This pattern of eating must last at least one month to meet the diagnosis.[15]

Complications may occur due to the substance consumed. For example, lead poisoning may result from the ingestion of paint or paint-soaked plaster,[16] hairballs may cause intestinal obstruction and Toxoplasma or Toxocara infections may follow ingestion of feces or soil.[17]

More recently, cases of pica have been tied to the obsessive–compulsive spectrum, and a move has arisen to consider OCD in the cause of pica.[20] Pica is recognized as a mental disorder in the Diagnostic and Statistical Manual of Mental Disorders (DSM 4). Sensory, physiological, cultural, and psychosocial perspectives have also been used by some to explain the causation of pica.[citation needed] Mental-health conditions, such as obsessive-compulsive disorder (OCD) and schizophrenia, have been proposed as causes of pica.[21]

However, pica can also be a cultural practice not associated with a deficiency or disorder. Ingestion of kaolin (white clay) among African-American women in the US state of Georgia shows the practice there to be a DSM 4 "culture-bound syndrome" and "not selectively associated with other psychopathology".[22] Similar kaolin ingestion is also widespread in parts of Africa.[23]

While lab test do not confirm pica, because pica can occur in people who have lower than normal nutrient levels and poor nutrition, the testing blood levels of iron and zinc may be recommended. Hemoglobin can also be checked to test for anemia. Lead levels should always be checked in children who may have eaten paint or objects covered in lead-paint dust. The healthcare provider should test for infection if the person has been eating contaminated soil or animal waste.[15]

The DSM-5 posits four criteria that must be met for a person to be diagnosed with pica:[18]

In individuals with autism, schizophrenia, and certain physical disorders (such as Kleine-Levin syndrome), non-nutritive substances may be eaten. In such instances, pica should not be noted as an additional diagnosis.[17]

Treatment for pica may vary and suspected cause (e.g., child, developmentally disabled, pregnant, or psychogenic) and may emphasize psychosocial, environmental and family-guidance approaches; iron deficiency may be treatable though iron supplement through dietary changes. An initial approach often involves screening for, and if necessary, treating any mineral deficiencies or other comorbid conditions.[5] Reports have cautioned against the use of medication until all non-psychogenic causes have been ruled out.[24]

Looking back at the different causes of pica related to assessment, the clinician tries to develop a treatment. First, there is pica as a result of social attention. A strategy might be used of ignoring the person's behavior or giving them the least possible attention. If their pica is a result of obtaining a favorite item, a strategy may be used where the person is able to receive the item or activity without eating inedible items. The individual's communication skills should increase so that they can relate what they want to another person without engaging in this behavior. If pica is a way for a person to escape an activity or situation, the reason why the person wants to escape the activity should be examined and the person should be moved to a new situation. If pica is motivated by sensory feedback, an alternative method of feeling that sensation should be provided. Other nonmedication techniques might include other ways for oral stimulation such as gum. Foods such as popcorn have also been found helpful. These things can be placed in a “pica box” that should be easily accessible to the individual when they feel like engaging in pica.[25]

Behavior-based treatment options can be useful for developmentally disabled and mentally ill individuals with pica. Behavioral treatments for pica have been shown to reduce pica severity by 80% in people with intellectual disabilities.[26] These may involve using positive reinforcement normal behavior. Many use aversion therapy, where the patient learns through positive reinforcement which foods are good and which ones they should not eat. Often, treatment is similar to the treatment of obsessive-compulsive or addictive disorders (such as exposure therapy). In some cases, treatment is as simple as addressing the fact they have this disorder and why they may have it. A recent study classified nine such classes of behavioral intervention: Success with treatment is generally high and generally fades with age, but it varies depending on the cause of the disorder. Developmental causes tend to have a lower success rate.[27]

The prevalence of pica is difficult to establish because of differences in definition and the reluctance of patients to admit to abnormal cravings and ingestion,[25] thus leading to the prevalence recordings of pica among at-risk groups being in the range of 8% to 65% depending on the study.[7] Based on compiled self-report and interview data of pregnant and postpartum women, pica is most prevalent geographically in Africa, with an estimated prevalence of 44.8%, followed by North and South America (23.0%) and Eurasia (17.5%).[28] Factors associated with Pica in this population were determined to be anemia and low levels of education, both of which are associated with low socioeconomic backgrounds.[28] Two studies of adults with intellectual disability living in institutions found that 21.8%[29] and 25.8%[30] of these groups suffered from pica.[31]

Prevalence rates for children are unknown.[31][32] Young children commonly place non-nutritious material into their mouths. This activity occurs in 75% of 12-month-old infants, and 15% of two- to three-year-old children.[32]

In institutionalized children with mental retardation, pica occurs in 10–33%.[32]

The condition currently known as pica was first described by Hippocrates.[6] It was in the category of “feeding disorders in infancy and early childhood” before the DSM 5, as pica was primarily diagnosed in children.[6] Diagnosis in all ages is becoming more common.[6]

The term pica originates in the Latin word for magpie, picave,[33] a bird that is famed for its unusual eating behaviors, where it is known to eat almost anything.[34] In 13th-century Latin work,[clarification needed] pica was referenced by the Greeks and Romans;[when?] however, it was not addressed in medical texts until 1563.[5]

In the southern United States in the 1800s, geophagia was a common practice among the slave population.[5] Geophagia is a form of pica in which the person consumes earthly substances such as clay, and is particularly prevalent to augment a mineral-deficient diet.[35] Noteworthy is the fact that kaolin was consumed by West Africans enslaved in the Southeastern United States, particularly the Georgia belt, due to the antidiarrheal qualities in the treatment of dysentery and other abdominal ailments.[36] The practice of consuming kaolin rocks was thereafter studied scientifically, the results of which led to the subsequent pharmaceutical commercialization of kaolinite, the clay mineral contained in kaolin. Kaolinite became the active ingredient in drugs such as Kaopectate and Pepto-Bismol, although the formulations have since found additional active ingredients to replace kaolinite. [37]

Research on eating disorders from the 16th to the 20th centuries suggests that during that time in history, pica was regarded more as a symptom of other disorders rather than its own specific disorder. Even today, what could be classified as pica behavior is a normative practice in some cultures as part of their beliefs, healing methods, or religious ceremonies.[5]

Unlike in humans, pica in dogs or cats may be a sign of immune-mediated hemolytic anemia, especially when it involves eating substances such as tile grout, concrete dust, and sand. Dogs exhibiting this form of pica should be tested for anemia with a complete blood count or at least hematocrit levels.[38][39] Although several theories have been proposed by experts to explain pica in animals, insufficient evidence exists to prove or disprove any of them.[40] Pica can also be found in animals such as dogs[40] and cats.