Bacterial vaginosis (BV) is a disease of the vagina caused by excessive growth of bacteria.[6][9] Common symptoms include increased vaginal discharge that often smells like fish.[2] The discharge is usually white or gray in color.[2] Burning with urination may occur.[2] Itching is uncommon.[2][6] Occasionally, there may be no symptoms.[2] Having BV approximately doubles the risk of infection by a number of sexually transmitted infections, including HIV/AIDS.[8][10] It also increases the risk of early delivery among pregnant women.[3][11]

BV is caused by an imbalance of the naturally occurring bacteria in the vagina.[4][5] There is a change in the most common type of bacteria and a hundred to thousandfold increase in total numbers of bacteria present.[6] Typically, bacteria other than Lactobacilli become more common.[12] Risk factors include douching, new or multiple sex partners, antibiotics, and using an intrauterine device, among others.[5] However, it is not considered a sexually transmitted infection.[13] Diagnosis is suspected based on the symptoms, and may be verified by testing the vaginal discharge and finding a higher than normal vaginal pH, and large numbers of bacteria.[6] BV is often confused with a vaginal yeast infection or infection with Trichomonas.[7]

Usually treatment is with an antibiotic, such as clindamycin or metronidazole.[6] These medications may also be used in the second or third trimesters of pregnancy.[6] However, the condition often recurs following treatment.[6] Probiotics may help prevent re-occurrence.[6] It is unclear if the use of probiotics or antibiotics affects pregnancy outcomes.[6][14]

BV is the most common vaginal infection in women of reproductive age.[5] The percentage of women affected at any given time varies between 5% and 70%.[8] BV is most common in parts of Africa and least common in Asia and Europe.[8] In the United States about 30% of women between the ages of 14 and 49 are affected.[15] Rates vary considerably between ethnic groups within a country.[8] While BV like symptoms have been described for much of recorded history, the first clearly documented case occurred in 1894.[1]

Common symptoms include increased vaginal discharge that usually smells like fish. The discharge is often white or gray in color. There may be burning with urination. Occasionally, there may be no symptoms.[2]

The discharge coats the walls of the vagina, and is usually without significant irritation, pain, or erythema (redness), although mild itching can sometimes occur. By contrast, the normal vaginal discharge will vary in consistency and amount throughout the menstrual cycle and is at its clearest at ovulation—about two weeks before the period starts. Some practitioners claim that BV can be asymptomatic in almost half of affected women,[16] though others argue that this is often a misdiagnosis.[17]

Although previously considered a mere nuisance infection, untreated bacterial vaginosis may cause increased susceptibility to sexually transmitted infections, including HIV, and pregnancy complications.[18][19]

It has been shown that HIV-infected women with bacterial vaginosis (BV) are more likely to transmit HIV to their sexual partners than those without BV.[10] Diagnostic criteria for BV have also been associated with a female genital tract factor that induces expression of HIV.[18]

There is evidence of an association between BV and increased rates of sexually transmitted infections such as HIV/AIDS.[18] BV is associated with up to a six-fold increase in HIV shedding. BV is a risk factor for viral shedding and herpes simplex virus type 2 infection. BV may increase the risk of infection with or reactivation of human papillomavirus (HPV).[18][20]

In addition, bacterial vaginosis as either pre-existing, or acquired, may increase the risk of pregnancy complications, most notably premature birth or miscarriage.[21][22] Pregnant women with BV have a higher risk of chorioamnionitis, miscarriage, preterm birth, premature rupture of membranes, and postpartum endometritis.[23] Women with BV who are treated with in vitro fertilization have a lower implantation rate and higher rates of early pregnancy loss.[18][20]

Healthy vaginal microbiota consists of species which neither cause symptoms or infections, nor negatively affect pregnancy. It is dominated mainly by Lactobacillus species.[12][24] BV is defined by the disequilibrium in the vaginal microbiota, with decline in the number of lactobacilli. While the infection involves a number of bacteria, it is believed that most infections start with Gardnerella vaginalis creating a biofilm, which allows other opportunistic bacteria to thrive.[9][25]

One of the main risks for developing BV is douching, which alters the vaginal microbiota and predisposes women to developing BV.[26] Douching is strongly discouraged by the U.S. Department of Health and Human Services and various medical authorities, for this and other reasons.[26]

BV is a risk factor for pelvic inflammatory disease, HIV, sexually transmitted infections (STIs), and reproductive and obstetric disorders or negative outcomes. It is possible for sexually inactive persons to develop bacterial vaginosis.[9]

Bacterial vaginosis may sometimes affect women after menopause. Also, subclinical iron deficiency may correlate with bacterial vaginosis in early pregnancy.[27] A longitudinal study published in February 2006, in the American Journal of Obstetrics and Gynecology, showed a link between psychosocial stress and bacterial vaginosis persisted even when other risk factors were taken into account.[28] Exposure to the spermicide nonoxynol-9 does not affect the risk of developing bacterial vaginosis.[29]

Having a female partner increases the risk of BV by 60%. The bacteria associated with BV have been isolated from male genitalia. BV microbiota has been found in the penis, coronal sulcus, and male urethra, in the male partners of infected females. Partners who have not been circumcised may act as a ‘reservoir’ increasing the likelihood of acquiring an infection after sexual intercourse. Another mode of transmission of the BV-associated microbiota is to a female sexual partner via skin-to-skin transfer. BV may be transmitted via the perineal enteric bacteria from the microbiota of the female and male genitalia.[18] 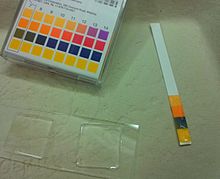 To make a diagnosis of bacterial vaginosis, a swab from inside the vagina should be obtained. These swabs should be tested for:

Two positive results in addition to the discharge itself are enough to diagnose BV. If there is no discharge, then all three criteria are needed.[30][non-primary source needed] Differential diagnosis for bacterial vaginosis includes the following:[31]

The Center For Disease Control (CDC) defines STIs as "a variety of clinical syndromes and infections caused by pathogens that can be acquired and transmitted through sexual activity."[33] But the CDC does not specifically identify BV as sexually transmitted infection.[13]

In clinical practice BV can be diagnosed using the Amsel criteria:[30]

At least three of the four criteria should be present for a confirmed diagnosis.[34] A modification of the Amsel criteria accepts the presence of two instead of three factors and is considered equally diagnostic.

An alternative is to use a Gram-stained vaginal smear, with the Hay/Ison[35] criteria or the Nugent[23] criteria. The Hay/Ison criteria are defined as follows:[34]

The Nugent Score is now rarely used by physicians due to the time it takes to read the slides and requires the use of a trained microscopist.[4] A score of 0-10 is generated from combining three other scores. The scores are as follows:

At least 10–20 high power (1000× oil immersion) fields are counted and an average determined.

DNA hybridization testing with Affirm VPIII was compared to the Gram stain using the Nugent criteria.[36] The Affirm VPIII test may be used for the rapid diagnosis of BV in symptomatic women but uses expensive proprietary equipment to read results, and does not detect other pathogens that cause BV, including Prevotella spp, Bacteroides spp, & Mobiluncus spp.

Screening during pregnancy is not recommended in the United States as of 2020.[37]

Some steps suggested to lower the risk include: not douching, avoiding sex, or limiting the number of sex partners.[38]

One review concluded that probiotics may help prevent re-occurrence.[6] Another review found that, while there is tentative evidence, it is not strong enough to recommend their use for this purpose.[39]

Early evidence suggested that antibiotic treatment of male partners could re-establish the normal microbiota of the male urogenital tract and prevent the recurrence of infection.[18] However, a 2016 Cochrane review found high-quality evidence that treating the sexual partners of women with bacterial vaginosis had no effect on symptoms, clinical outcomes, or recurrence in the affected women. It also found that such treatment may lead treated sexual partners to report increased adverse events.[18]

Treatment is typically with the antibiotics metronidazole or clindamycin.[40] They can be either given by mouth or applied inside the vagina.[40] About 10% to 15% of people, however, do not improve with the first course of antibiotics and recurrence rates of up to 80% have been documented.[20] Recurrence rates are increased with sexual activity with the same pre-/posttreatment partner and inconsistent condom use although estrogen-containing contraceptives decrease recurrence.[41] When clindamycin is given to pregnant women symptomatic with BV before 22 weeks of gestation the risk of pre-term birth before 37 weeks of gestation is lower.[42]

Other antibiotics that may work include macrolides, lincosamides, nitroimidazoles, and penicillins.[18]

A 2009 Cochrane review found tentative but insufficient evidence for probiotics as a treatment for BV.[20] A 2014 review reached the same conclusion.[45] A 2013 review found some evidence supporting the use of probiotics during pregnancy.[46] The preferred probiotics for BV are those containing high doses of lactobacilli (around 109 CFUs) given in the vagina.[47] Intravaginal administration is preferred to taking them by mouth.[47] Prolonged repetitive courses of treatment appear to be more promising than short courses.[47]

Topical antiseptics, for example dequalinium chloride, policresulen, hexetidine or povidone-iodine vaginal suppositories may be applied, if the risk of ascending infections is low (outside of pregnancy and in immunocompetent patients without histories of upper genital tract infections).[48] One study found that vaginal irrigations with hydrogen peroxide (3%) resulted in a slight improvement but this was much less than with the use of oral metronidazole.[49]

BV is the most common infection of the vagina in women of reproductive age.[5] The percentage of women affected at any given time varies between 5% and 70%.[8] BV is most common in parts of Africa, and least common in Asia and Europe.[8] In the United States, about 30% of those between the ages of 14 and 49 are affected.[15] Rates vary considerably between ethnic groups within a country.[8]