While most discharge represents normal functioning of the body, some changes in discharge can reflect infection or other problems.[5][6] Infections that may cause changes in vaginal discharge include vaginal yeast infections, bacterial vaginosis, and certain sexually transmitted infections.[7] Non infectious causes may include bubble bath or foreign objects.[3] The characteristics of abnormal vaginal discharge vary depending on the cause, with common features including a change in color, increase in amount, foul smell, or associated symptoms such as itching, burning, pelvic pain, abnormal vaginal bleeding, or pain during sex.[2][3] 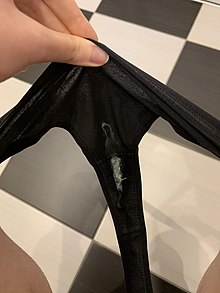 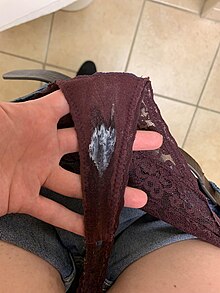 The majority of the liquid in vaginal discharge is mucus produced by glands of the cervix.[1][5] The rest is made up of transudate from the vaginal walls and secretions from glands (Skene's and Bartholin's).[5] The solid components are exfoliated epithelial cells from the vaginal wall and cervix as well as some of the bacteria that inhabit the vagina.[1] These bacteria that live in the vagina do not typically cause disease. In fact, they can protect the individual from other infectious and invasive bacteria by producing substances such as lactic acid and hydrogen peroxide that inhibit growth of other bacteria.[7] The normal composition of bacteria in the vagina (vaginal flora) can vary, but is most commonly dominated by lactobacilli.[1] On average, there are approximately 108 to 109 bacteria per milliliter of vaginal discharge.[1][5]

Normal vaginal discharge is clear, white, or off-white.[1] The consistency can range from milky to clumpy, and odor typically mild to non-existent.[1] The majority of the discharge pools in the deepest portion of the vagina (the posterior fornix)[4] and exits the body over the course of a day with the force of gravity.[1][5] A typical reproductive-age woman produces 1.5 grams (half to one teaspoon) of vaginal discharge every day.[1]

The composition and amount of vaginal discharge changes as an individual goes through the various stages of sexual and reproductive development.[5]

In neonates, vaginal discharge sometimes occurs in the first few days after birth. This is due to exposure to estrogen while in utero. Neonatal vaginal discharge may be white or clear with a mucous texture, or it may be bloody from normal transient shedding of the endometrium.[8]

The vagina of girls before puberty is thinner and has a different bacterial flora.[1][5] Vaginal discharge in pre-pubertal girls is minimal with a neutral to alkaline pH ranging from 6 to 8.[9]  The composition of the bacterial population in pre-pubertal girls is dominated by staphylococcus species, in addition to a range of anaerobes, enterococci, E. coli, and lactobacillus.[9]

During puberty, the hormone estrogen begins to be produced by the ovaries.[4] Even before the beginning of menses (up to 12 months before menarche, typically at the same time as the development of breast buds,[5]) vaginal discharge increases in amount and changes in composition.[9] Estrogen matures vaginal tissues and causes increased production of glycogen by epithelial cells of the vagina.[1] These higher levels of glycogen in the vaginal canal support the growth of lactobacilli over other bacterial species.[1][4] When lactobacilli use glycogen as a food source, they convert it to lactic acid.[1][4][5] Therefore, the predominance of lactobacilli in the vaginal canal creates a more acidic environment. In fact, the pH of the vagina and vaginal discharge after puberty ranges between 3.5 and 4.7.[1]

During pregnancy, vaginal discharge volume increases as a result of the body's increased levels of estrogen and progesterone.[12] The discharge is usually white or slightly gray, and may have a musty smell.[12] The normal discharge of pregnancy does not contain blood or cause itching.[12] The pH of the vaginal discharge in pregnancy tends to be more acidic than normal due to increased production of lactic acid.[12] This acidic environment helps to provide protection from many infections, though conversely it also makes women more susceptible to vaginal yeast infections.[12]

With the drop in estrogen levels that comes with menopause, the vagina returns to a state similar to pre-puberty.[8] Specifically, the vaginal tissues thin, become less elastic; blood flow to the vagina decreases; the surface epithelial cells contain less glycogen.[8] With decreased levels of glycogen, the vaginal flora shifts to contain fewer lactobacilli, and the pH subsequently decreases to a range of 6.0-7.5.[8] The overall amount of vaginal discharge decreases in menopause. While this is normal, it can lead to symptoms of dryness and pain during penetrative sexual intercourse.[13] These symptoms can often be treated with vaginal moisturizers/lubricants or vaginal hormone creams.[14]

Bacterial vaginosis (BV) is an infection caused by a change in the vaginal flora, which refers to the community of organisms that live in the vagina.[16] It is the most common cause of pathological vaginal discharge in women of childbearing age and accounts for 40–50% of cases.[17] In BV, the vagina experiences a decrease in a bacterium called lactobacilli, and a relative increase in a multitude of anaerobic bacteria with the most predominant being Gardnerella vaginalis.[18] This imbalance results in the characteristic vaginal discharge experienced by patients with BV.[16] The discharge in BV has a characteristic strong fishy odor, which is caused by the relative increase in anaerobic bacteria.[1] The discharge is typically thin and grey, or occasionally green.[16][18] It sometimes is accompanied by burning with urination. Itching is rare.[19] The exact reasons for the disruption of vaginal flora leading to BV are not fully known.[20] However, factors associated with BV include antibiotic use, unprotected sex, douching, and using an intrauterine device (IUD).[21] The role of sex in BV is unknown, and BV is not considered an STI.[16] The diagnosis of BV is made by a health care provider based on the appearance of the discharge, discharge pH > 4.5, presence of clue cells under the microscope, and a characteristic fishy odor when the discharge is placed on a slide and combined with potassium hydroxide ("whiff test").[16][18] The gold standard for diagnosis is a gram stain showing a relative lack of lactobacilli and a polymicrobial array of gram negative rods, gram variable rods, and cocci. BV may be treated with oral or intravaginal antibiotics, or oral or intravaginal lactobacillus.[22]

A vaginal yeast infection or vaginal candidiasis results from overgrowth of candida albicans, or yeast, in the vagina.[23] This is a relatively common infection, with over 75% of women having experienced at least one yeast infection at some point in their life.[24] Risk factors for yeast infections include recent antibiotic use, diabetes, immunosuppression, increased estrogen levels, and use of certain contraceptive devices including intrauterine devices, diaphragms, or sponges.[23][25] It is not a sexually transmitted infection. Candida vaginal infections are common; an estimated 75% of women will have at least one yeast infection in their lifetime.[25] Vaginal discharge is not always present in yeast infections, but when occurring it is typically odorless, thick, white, and clumpy.[23] Vaginal itching is the most common symptom of candida vulvovaginitis.[23] Women may also experience burning, soreness, irritation, pain during urination, or pain during sex.[25] The diagnosis of Candida vulvovaginitis is made by looking at a sample taken from the vagina under the microscope that shows hyphae (yeast), or from a culture.[26] It is important to note that the symptoms described above may be present in other vaginal infections, so microscopic diagnosis or culture is needed to confirm the diagnosis.[25] Treatment is with intra-vaginal or oral anti-fungal medications.[25]

Trichomonas vaginitis is an infection acquired through sex that is associated with vaginal discharge.[23] It can be transmitted by way of the penis to the vagina, the vagina to the penis, or from vagina to vagina.[27] The discharge in Trichomonas is typically yellowish-green in color.[23] It sometimes is frothy and can have a foul smell.[28] Other symptoms may include vaginal burning or itching, pain with urination, or pain with sexual intercourse.[27] Trichomonas is diagnosed by looking at a sample of discharge under the microscope showing trichomonads moving on the slide.[23] However, in women with trichomonas the organism is typically detected in only 60-80% of cases.[23] Other testing, including a culture of the discharge or a PCR assay, are more likely to detect the organism.[23] Treatment is with a one time dose of oral antibiotics, most commonly metronidazole or tindazole.[23]

Foreign objects can cause a chronic vaginal discharge with a foul odor.[29] Common foreign objects found in adolescents and adults are tampons, toilet paper, and objects used for sexual arousal.[29]