Genital warts are a sexually transmitted infection caused by certain types of human papillomavirus (HPV).[4] They are generally pink in color and project out from the surface of the skin.[1] Usually they cause few symptoms, but can occasionally be painful.[3] Typically they appear one to eight months following exposure.[2] Warts are the most easily recognized symptom of genital HPV infection.[2]

Some HPV vaccines can prevent genital warts as may condoms.[2][4] Treatment options include creams such as podophyllin, imiquimod, and trichloroacetic acid.[3] Cryotherapy or surgery may also be an option.[3] After treatment warts often resolve within six months.[2] Without treatment, in up to a third of cases they resolve on their own.[2]

About 1% of people in the United States have genital warts.[2] Many people, however, are infected and do not have symptoms.[2] Without vaccination nearly all sexually active people will get some type of HPV at one point in their lives.[5][6] The disease has been known at least since the time of Hippocrates in 300 BC.[7]

In most cases, there are no symptoms of HPV infection other than the warts themselves. Sometimes warts may cause itching, redness, or discomfort, especially when they occur around the anus. Although they are usually without other physical symptoms, an outbreak of genital warts may cause psychological distress, such as anxiety, in some people.[9]

The types of HPV that cause warts are highly transmissible. Roughly three out of four unaffected partners of patients with warts develop them within eight months.[11] Other studies of partner concordance suggest that the presence of visible warts may be an indicator of increased infectivity; HPV concordance rates are higher in couples where one partner has visible warts.[10]

Although 90% of HPV infections are cleared by the body within two years of infection, it is possible for infected cells to undergo a latency (quiet) period, with the first occurrence or a recurrence of symptoms happening months or years later.[2] Latent HPV, even with no outward symptoms, is still transmissible to a sexual partner. If an individual has unprotected sex with an infected partner, there is a 70% chance that he or she will also become infected.

In individuals with a history of previous HPV infection, the appearance of new warts may be either from a new exposure to HPV, or from a recurrence of the previous infection. As many as one-third of people with warts will experience a recurrence.[12] 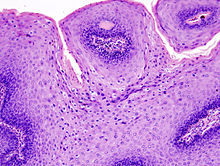 Some practitioners use an acetic acid solution to identify smaller warts ("subclinical lesions"), but this practice is controversial.[9] Because a diagnosis made with acetic acid will not meaningfully affect the course of the disease, and cannot be verified by a more specific test, a 2007 UK guideline advises against its use.[13]

Gardasil (sold by Merck & Co.) is a vaccine that protects against human papillomavirus types 6, 11, 16 and 18. Types 6 and 11 cause genital warts, while 16 and 18 cause cervical cancer. The vaccine is preventive, not therapeutic, and must be given before exposure to the virus type to be effective, ideally before the beginning of sexual activity. The vaccine is approved by the US Food and Drug Administration for use in both males and females as early as 9 years of age.[16]

In the UK, Gardasil replaced Cervarix in September 2012[17] for reasons unrelated to safety.[18] Cervarix had been used routinely in young females from its introduction in 2008, but was only effective against the high-risk HPV types 16 and 18, neither of which typically causes warts.

There is no cure for HPV. Existing treatments are focused on the removal of visible warts, but these may also regress on their own without any therapy.[9] There is no evidence to suggest that removing visible warts reduces transmission of the underlying HPV infection. As many as 80% of people with HPV will clear the infection within 18 months.[11]

A healthcare practitioner may offer one of several ways to treat warts, depending on their number, sizes, locations, or other factors. All treatments can potentially cause depigmentation, itching, pain, or scarring.[9][19]

Many therapies, including folk remedies, have been suggested for treating genital warts, some of which have little evidence to suggest they are effective or safe.[20] Those listed here are ones mentioned in national or international practice guidelines as having some basis in evidence for their use.

Physically ablative methods are more likely to be effective on keratinized warts. They are also most appropriate for patients with fewer numbers of relatively smaller warts.[13]

Podophyllin, podofilox and isotretinoin should not be used during pregnancy, as they could cause birth defects in the fetus.

Genital HPV infections have an estimated prevalence in the US of 10–20% and clinical manifestations in 1% of the sexually active adult population.[23] US incidence of HPV infection has increased between 1975 and 2006.[23] About 80% of those infected are between the ages of 17–33.[23] Although treatments can remove the warts, they do not remove the HPV, so warts can recur after treatment (about 50–73% of the time[25]). Warts can also spontaneously regress (with or without treatment).[23]

Traditional theories postulated that the virus remained in the body for a lifetime. However, studies using sensitive DNA techniques have shown that through immunological response, the virus can either be cleared or suppressed to levels below what polymerase chain reaction (PCR) tests can measure. One study testing genital skin for subclinical HPV using PCR found a prevalence of 10%.[23]

A condyloma acuminatum is a single genital wart, and condylomata acuminata are multiple genital warts. The word roots mean "pointed wart" (from Greek κόνδυλος, "knuckle", Greek -ωμα -oma, "disease," and Latin acuminatum "pointed"). Although similarly named, it is not the same as condyloma latum, which is a complication of secondary syphilis.