Edema, also known as fluid retention or swelling, is the buildup of fluid in the body's tissue.[1] Most commonly, the legs or arms are affected.[1] Symptoms may include skin which feels tight, the area may feel heavy, and affected joints may be hard to move.[1] Other symptoms depend on the underlying cause.[2]

Causes may include venous insufficiency, heart failure, kidney problems, low protein levels, liver problems, deep vein thrombosis, infections, angioedema, certain medications, and lymphedema.[1][2] It may also occur due to prolonged sitting or standing and during menstruation or pregnancy.[1] The condition is more concerning if it starts suddenly, or pain or shortness of breath is present.[2]

Treatment depends on the underlying cause.[2] If the underlying mechanism involves sodium retention, decreased salt intake and a diuretic may be used.[2] Elevating the legs and support stockings may be useful for edema of the legs.[3] Older people are more commonly affected.[3] The word is from the Greek οἴδημα oídēma meaning 'swelling'.[4]

An edema will occur in specific organs as part of inflammations, tendonitis or pancreatitis, for instance. Certain organs develop edema through tissue specific mechanisms.

Examples of edema in specific organs:

Causes of edema which are generalized to the whole body can cause edema in multiple organs and peripherally. For example, severe heart failure can cause pulmonary edema, pleural effusions, ascites and peripheral edema. Such severe systemic edema is called anasarca. In rare cases, a Parvovirus B19 infection may cause generalized edemas.[7]

Although a low plasma oncotic pressure is widely cited for the edema of nephrotic syndrome, most physicians note that the edema may occur before there is any significant protein in the urine (proteinuria) or fall in plasma protein level. Most forms of nephrotic syndrome are due to biochemical and structural changes in the basement membrane of capillaries in the kidney glomeruli, and these changes occur, if to a lesser degree, in the vessels of most other tissues of the body. Thus the resulting increase in permeability that leads to protein in the urine can explain the edema if all other vessels are more permeable as well.[8]

As well as the previously mentioned conditions, edemas often occur during the late stages of pregnancy in some women. This is more common with those of a history of pulmonary problems or poor circulation also being intensified if arthritis is already present in that particular woman. Women who already have arthritic problems most often have to seek medical help for pain caused from over-reactive swelling. Edemas that occur during pregnancy are usually found in the lower part of the leg, usually from the calf down.

Hydrops fetalis is a condition in a baby characterized by an accumulation of fluid in at least two body compartments.

The pumping force of the heart should help to keep a normal pressure within the blood vessels. But if the heart begins to fail (a condition known as congestive heart failure) the pressure changes can cause very severe water retention. In this condition water retention is mostly visible in the legs, feet and ankles, but water also collects in the lungs, where it causes a chronic cough. This condition is usually treated with diuretics; otherwise, the water retention may cause breathing problems and additional stress on the heart.[9]

Another cause of severe water retention is kidney failure, where the kidneys are no longer able to filter fluid out of the blood and turn it into urine. Kidney disease often starts with inflammation, for instance in the case of diseases such as nephrotic syndrome or lupus. Once again, this type of water retention is usually visible in the form of swollen legs and ankles.

Protein attracts water and plays an important role in water balance. In cases of severe protein deficiency, the blood may not contain enough protein to attract water from the tissue spaces back into the capillaries. This is why starvation often shows an enlarged abdomen. The abdomen is swollen with edema or water retention caused by the lack of protein in their diet.

Swollen legs, feet and ankles are common in late pregnancy. The problem is partly caused by the weight of the uterus on the major veins of the pelvis. It usually clears up after delivery of the baby, and is mostly not a cause for concern,[11] though it should always be reported to a doctor.

Lack of exercise is another common cause of water retention in the legs. Exercise helps the leg veins work against gravity to return blood to the heart. If blood travels too slowly and starts to pool in the leg veins, the pressure can force too much fluid out of the leg capillaries into the tissue spaces. The capillaries may break, leaving small blood marks under the skin. The veins themselves can become swollen, painful and distorted – a condition known as varicose veins.[12] Muscle action is needed not only to keep blood flowing through the veins but also to stimulate the lymphatic system to fulfil its "overflow" function. Long-haul flights, lengthy bed-rest, immobility caused by disability and so on, are all potential causes of water retention. Even very small exercises such as rotating ankles and wiggling toes can help to reduce it.[13]

Certain medications are prone to causing water retention. These include estrogens, thereby including drugs for hormone replacement therapy or the combined oral contraceptive pill,[14] as well as non-steroidal anti-inflammatory drugs[15] and beta-blockers.[16]

Six factors can contribute to the formation of edema:

Generation of interstitial fluid is regulated by the forces of the Starling equation.[21] Hydrostatic pressure within blood vessels tends to cause water to filter out into the tissue. This leads to a difference in protein concentration between blood plasma and tissue. As a result, the colloidal or oncotic pressure of the higher level of protein in the plasma tends to draw water back into the blood vessels from the tissue. Starling's equation states that the rate of leakage of fluid is determined by the difference between the two forces and also by the permeability of the vessel wall to water, which determines the rate of flow for a given force imbalance. Most water leakage occurs in capillaries or post capillary venules, which have a semi-permeable membrane wall that allows water to pass more freely than protein. (The protein is said to be reflected and the efficiency of reflection is given by a reflection constant of up to 1.) If the gaps between the cells of the vessel wall open up then permeability to water is increased first, but as the gaps increase in size permeability to protein also increases with a fall in reflection coefficient.

Changes in the variables in Starling's equation can contribute to the formation of edemas either by an increase in hydrostatic pressure within the blood vessel, a decrease in the oncotic pressure within the blood vessel or an increase in vessel wall permeability. The latter has two effects. It allows water to flow more freely and it reduces the colloidal or oncotic pressure difference by allowing protein to leave the vessel more easily.

Cutaneous edema is referred to as "pitting" when, after pressure is applied to a small area, the indentation persists after the release of the pressure. Peripheral pitting edema, as shown in the illustration, is the more common type, resulting from water retention. It can be caused by systemic diseases, pregnancy in some women, either directly or as a result of heart failure, or local conditions such as varicose veins, thrombophlebitis, insect bites, and dermatitis.

Non-pitting edema is observed when the indentation does not persist. It is associated with such conditions as lymphedema, lipedema, and myxedema.

Vein obstruction causes facial edema while lying down to sleep. 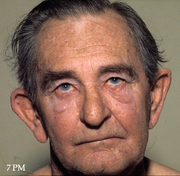 After being upright all day, the swelling disappears.

When possible, treatment involves resolving the underlying cause. Many cases of heart or kidney disease, are treated with diuretics.[9]

Treatment may also involve positioning the affected body parts to improve drainage. For example, swelling in feet or ankles may be reduced by having the person lie down in bed or sit with the feet propped up on cushions. Intermittent pneumatic compression can be used to pressurize tissue in a limb, forcing fluids—both blood and lymph—to flow out of the compressed area.