Yellow fever vaccine is a vaccine that protects against yellow fever.[4] Yellow fever is a viral infection that occurs in Africa and South America.[4] Most people begin to develop immunity within ten days and 99 percent are protected within one month of vaccination, and this appears to be lifelong.[4] The vaccine can be used to control outbreaks of disease.[4] It is given either by injection into a muscle or just under the skin.[4]

The World Health Organization (WHO) recommends routine immunization in all countries where the disease is common.[4] This should typically occur between nine and twelve months of age.[4] Those traveling to areas where the disease occurs should also be immunized.[4] Additional doses after the first are generally not needed.[5]

Yellow fever vaccine is generally safe.[4] This includes in those with HIV infection but without symptoms.[4] Mild side effects may include headache, muscle pains, pain at the injection site, fever, and rash.[4] Severe allergies occur in about eight per million doses, serious neurological problems occur in about four per million doses, and organ failure occurs in about three per million doses.[4] It appear to be safe in pregnancy and therefore recommended among those who will be potentially exposed.[4] It should not be given to those with very poor immune function.[6] 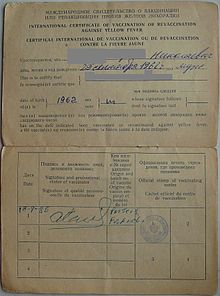 The junior deck officer Yellow Fever vaccination certificate. The vaccination was done in Cuba and on board of Soviet mv Toyvo Antikaynen on 18 of September 1985.

People most at risk of contracting the virus should be vaccinated. Woodcutters working in tropical areas should be particularly targeted for vaccination. Insecticides, protective clothing, and screening of houses are helpful, but not always sufficient for mosquito control; people should always use an insecticide spray while in certain areas. In affected areas, mosquito control methods have proven effective in decreasing the number of cases.[11]

Travelers should have the vaccine ten days prior to being in an endemic area.

On 17 May 2013, the World Health Organization (WHO) Strategic Advisory Group of Experts on immunization (SAGE) announced that a 'booster' dose of yellow fever (YF) vaccine, ten years after a primary dose, is not necessary. Since yellow fever vaccination began in the 1930s, only 12 known cases of yellow fever post-vaccination have been identified, after 600 million doses have been dispensed. Evidence showed that among this small number of "vaccine failures", all cases developed the disease within five years of vaccination. This demonstrates that immunity does not decrease with time.[12]

The World Health Organization recommends the vaccine between the ages of 9 and 12 months in areas where the disease is common.[4] Anyone over the age of nine months who has not been previously immunized and either lives in or is traveling to an area where the disease occurs should also be immunized.[4]

The defined daily dose is not established.[13] 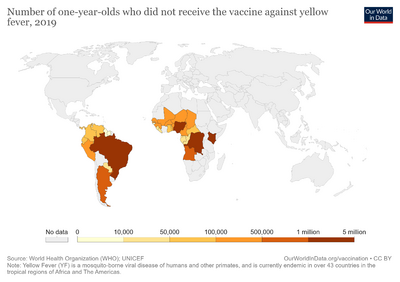 The yellow fever 17D vaccine is considered safe, with over 500 million doses given and very few documented cases of vaccine associated illness (62 confirmed cases and 35 deaths as of January 2019).[14] In no case of vaccine-related illness has there been evidence of the virus reverting to a virulent phenotype.

The majority of adverse reactions to the 17D vaccine result from allergic reaction to the eggs in which the vaccine is grown. Persons with known egg allergy should discuss this with their physician prior to vaccination. In addition, there is a small risk of neurologic disease and encephalitis, particularly in individuals with compromised immune systems and very young children. The 17D vaccine is contraindicated in (among others) infants between zero and six months or over 59 years of age,[15] people with thymus disorders associated with abnormal immune cell function, people with primary immunodeficiencies, and anyone with a diminished immune capacity including those taking immunosuppressant drugs.[16]

The Canadian Medical Association published a 2001 CMAJ article entitled "Yellow fever vaccination: be sure the patient needs it".[18] The article begins by stating that of the seven people who developed system failure within two to five days of the vaccine in 1996–2001, six died "including 2 who were vaccinated even though they were planning to travel to countries where yellow fever has never been reported." The article cites that "3 demonstrated histopatholic changes consistent with wild yellow fever virus." The author recommends vaccination for only non-contraindicated travelers (see the articles list) and those travelers going where yellow fever activity is reported or in the endemic zone which can be found mapped at the CDC website cited below. In addition, the 2010 online edition of the Center for Disease Control Traveler's Health Yellow Book that between 1970 and 2002 only "nine cases of yellow fever were reported in unvaccinated travelers from the United States and Europe who traveled" to West Africa and South America, and 8 of the 9 died. However, it goes on to cite "only 1 documented case of yellow fever in a vaccinated traveler. This nonfatal case occurred in a traveler from Spain who visited several West African countries in 1988".[19]

The first attempts to develop a yellow fever vaccine followed the opening of the Panama Canal in 1912, which increased global exposure to the disease.[20] The Japanese bacteriologist Hideyo Noguchi led investigations for the Rockefeller Foundation in Ecuador that resulted in a vaccine based on his theory that the disease was caused by a leptospiral bacterium. However, other investigators could not duplicate his results and the ineffective vaccine was eventually abandoned.

Another vaccine was developed from the "French strain" of the virus, obtained by Pasteur Institute scientists from a man in Dakar, Senegal, who survived his bout with the disease. This vaccine could be administered by scarification, like the smallpox vaccine, and was given in combination to produce immunity to both diseases, but it also had severe systemic and neurologic complications in a few cases. Attempts to attenuate the virus used in the vaccine failed. Scientists at the Rockefeller Foundation developed another vaccine derived from the serum of an African named Asibi in 1927, the first isolation of the virus from a human.[21] It was safer but involved the use of large amounts of human serum, which limited widespread use. Both vaccines were in use for several years, the Rockefeller vaccine in the Western hemisphere and England, and the Pasteur Institute vaccine in France and its African colonies.

In 1937, Max Theiler, working with Hugh Smith at the Rockefeller Foundation to improve the vaccine from the "Asibi" strain, discovered that a favorable chance mutation in the attenuated virus had produced a highly effective strain that was named 17D. After field trials in Brazil, over one million people were vaccinated by 1939, without severe complications.[7] For his work on the yellow fever vaccine, Theiler received the 1951 Nobel Prize in Physiology or Medicine.[22] Only the 17D vaccine remains in use today.[4]

Two vaccines were developed in the 1930s, after scientists isolated yellow fever virus in West Africa.[23] The vaccine 17D was developed by the South African microbiologist Max Theiler at the Rockefeller Institute in New York City. This vaccine was widely used by the U.S. Army during World War II.[24] Following the work of Ernest Goodpasture, Theiler used chicken eggs to culture the virus and won a Nobel Prize in 1951 for this achievement. A French team developed the French neurotropic vaccine (FNV), which was extracted from mouse brain tissue. Since this vaccine was associated with a higher incidence of encephalitis, FNV was not recommended after 1961. Vaccine 17D is still in use, and more than 400 million doses have been distributed. Little research has been done to develop new vaccines. Some researchers worry that the 60-year-old technology for vaccine production may be too slow to stop a major new yellow-fever epidemic. Newer vaccines, based on vero cells, are in development and should replace 17D at some point.[25][26][27]

The outbreak of yellow fever in Angola in January 2016 has raised concerns about whether the global supply of vaccine is adequate to meet the need during a large epidemic or pandemic of the disease.[28] Routine childhood immunization has been suspended in other African countries to ensure an adequate supply in the vaccination campaign against the outbreak in Angola.[29] Emergency stockpiles of vaccine diverted to Angola, which consisted of about 10 million doses at the end of March 2016, had become exhausted,[30][31] but were being replenished by May 2016.[32] However, in August it was reported that about one million doses of six million shipped in February had been sent to the wrong place or not kept cold enough to ensure efficacy, resulting in shortages to fight the spreading epidemic in DR Congo.[33] As an emergency measure, experts have suggested using a fractional dose (1/5 or 1/10 of the usual dose) to extend existing supplies of vaccine.[34][29] Others have noted that switching manufacturing processes to modern cell-culture technology might improve vaccine supply shortfalls.[35] Manufacture of the current vaccine is slow and laborious. A new vaccine under investigation is made by a different means.[36] On June 17, the WHO agreed to the use of 1/5 the usual dose as an emergency measure during the ongoing outbreak in Angola and the DR Congo.[37] The fractional dose would not qualify for a yellow fever certificate of vaccination for travelers.

Increases in cases of yellow fever in endemic areas of Africa and South America in the 1980s were addressed by the WHO Yellow Fever Initiative launched in the mid-2000s.[38] The initiative was supported by the Gavi Alliance, a collaboration of the WHO, UNICEF, vaccine manufacturers, and private philanthropists such as the Bill & Melinda Gates Foundation. Gavi-supported vaccination campaigns since 2011 have covered 88 million people in 14 countries considered at "high-risk" of a yellow fever outbreak (Angola was considered "medium risk"). Activities of the Yellow Fever Initiative are managed through an international coordinating group established in 2000 when a global shortage of yellow fever vaccine had developed because of the long lead time to manufacture the vaccine.[39] As of 2013, there were four WHO-qualified manufacturers: Bio-Manguinhos in Brazil (with the Oswaldo Cruz Foundation), Institute Pasteur in Dakar, Senegal, the Federal State Unitary Enterprise of Chumakov Institute in Russia, and Sanofi Pasteur, the French pharmaceutical company.[30][40] Two other manufacturers supply domestic markets: Wuhan Institute of Biological Products in China and Sanofi Pasteur in the United States.[35] Seth Berkley, the chief executive of Gavi, has warned about the worldwide threat of yellow fever because of shortages in vaccine supplies.[41]

Demand for yellow vaccine for preventive campaigns has increased from about five million doses per year to a projected 62 million per year by 2014.[42] UNICEF reported in 2013 that supplies were insufficient. Manufacturers are producing about 35 million of the 64 million doses needed per year.[43]

Demand for the yellow fever vaccine has continued to increase due to the growing number of countries implementing yellow fever vaccination as part of their routine immunization programmes.[44] Upsurges in yellow fever outbreaks in Angola (2015), Democratic Republic of Congo (2016), Uganda (2016), and in Nigeria and Brazil in 2017 have further increased demand, while straining global vaccine supply.[44][45] Therefore, to vaccinate susceptible populations in preventive mass immunization campaigns during outbreaks. As of 2016[update], fractional dosing of the vaccine is considered as a dose-sparing strategy to maximize limited vaccine supplies.[44] Fractional dose vaccination refers to administration of a reduced volume of vaccine dose, which has been reconstituted as per manufacturer recommendations.[44][34][46] The first practical use of fractional doses of the yellow fever vaccine was in response to the 2016 outbreak in the Democratic Republic of Congo.[44]