The World Health Organization (WHO) recommends that rotavirus vaccine be included in national routine vaccinations programs, especially in areas where the disease is common.[2] This should be done along with promoting breastfeeding, handwashing, clean water, and good sanitation.[2] It is given by mouth as a liquid and requires two or three doses.[2] It should be given starting around six weeks of age.[2]

A 2009 review estimated that vaccination against rotavirus would prevent about 45% of deaths due to rotavirus gastroenteritis, or about 228,000 deaths annually worldwide. At US$5 per dose, the estimated cost per life saved was $3,015, $9,951 and $11,296 in low-, lower-middle-, and upper-middle-income countries, respectively.[11]

Safety and efficacy trials in Africa and Asia found that the vaccines dramatically reduced severe disease among infants in developing countries, where a majority of rotavirus-related deaths occur.[12][13] A 2019 Cochrane review concluded that RV1, RV5, and Rotavac vaccines are safe and are effective at preventing diarrhea.[3]

Additionally, the vaccines may also prevent illness in non-vaccinated children by limiting exposure through the number of circulating infections.[4] A 2014 review of available clinical trial data from countries routinely using rotavirus vaccines in their national immunization programs found that rotavirus vaccines have reduced rotavirus hospitalizations by 49–92% and all-cause diarrhea hospitalizations by 17–55%.[18] 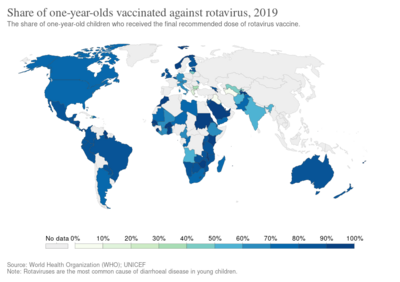 The World Health Organization recommends the first dose of vaccine be given right after 6 weeks of age.[2] Two or three doses more than a month apart should be given, depending on the vaccine administered.[2] Because the majority of cases occur between six months and two years of age, the vaccine is not recommended for use in children over two years of age.[2]

The defined daily dose is not established.[19]

Rotarix is a monovalent, human, live attenuated rotavirus vaccine containing one rotavirus strain of G1P[8] specificity. ROTARIX is indicated for the prevention of rotavirus gastroenteritis caused by G1 and non-G1 types (G3, G4, and G9) when administered as a 2-dose series in infants and children.[20] It was approved by the U.S. FDA in April 2008.[21]

H. Fred Clark and Paul Offit, the inventors of RotaTeq.

Rotavac was licensed for use in India in 2014, and is manufactured by Bharat Biotech International Limited. It is a live attenuated, monovalent vaccine containing a G9P[11] human strain isolated from an Indian child.[25] It is given by mouth in a three-dose series, four weeks apart, beginning at six weeks of age up until eight months of age.[26]

Rotavin-M1 was licensed for use in Vietnam in 2007, and is manufactured by the Center for Research and Production of Vaccines. The vaccine contains a G1P[8] human rotavirus strain.[8]

Lanzhou lamb rotavirus vaccine was licensed for use in China in 2000, and is manufactured by the Lanzhou Institute of Biological Products. It contains a G10P[12] lamb rotavirus strain.[8]

Rotasiil is lyophilized pentavalent vaccine. It contain human bovine reassortant strains of rotavirus serotypes G1, G2, G3, G4 and G9. This is world's first thermostable vaccine which can be stored without refrigeration at or below 25 °C. Rotasiil is recently[when?] launched in India.[27]

In 1998, a rotavirus vaccine (RotaShield, by Wyeth) was licensed for use in the United States. Clinical trials in the United States, Finland, and Venezuela had found it to be 80 to 100% effective at preventing severe diarrhea caused by rotavirus A, and researchers had detected no statistically significant serious adverse effects. The manufacturer of the vaccine, however, withdrew it from the market in 1999, after it was discovered that the vaccine may have contributed to an increased risk for intussusception, or bowel obstruction, in one of every 12,000 vaccinated infants.[28] There then followed eight years of delay until rival manufacturers were able to introduce new vaccines that were shown to be more safe and effective in children: Rotarix by GlaxoSmithKline[20] and RotaTeq by Merck.[29] Both are taken orally and contain disabled live virus.

The World Health Organization recommends that rotavirus vaccine be included in all national immunization schedules because the risk of intussusception following rotavirus vaccination remains very low compared with the benefits of preventing the impact of severe and deadly diarrhea.[30]

In 2011, Merck agreed to sell its vaccine to Gavi at $3.50 per dose, for distribution to West African countries, compared to about $70 in the United States. GlaxoSmithKline sells its vaccine for $2.25 per dose. In 2018, Merck announced it would no longer be able to meet its commitments for West Africa, while opening sales to China at about $40 per dose under a 2012 contract. This may leave some countries unable to obtain the previously expected supply, while other providers get approvals and ramp up production.[31]

More than 80 countries have introduced routine rotavirus vaccination, almost half with the support of Gavi, the Vaccine Alliance.[8] In order to make rotavirus vaccines available, accessible, and affordable in all countries—particularly low- and middle-income countries in Africa and Asia where the majority of rotavirus deaths occur—international non-governmental organization PATH, the WHO, the U.S. Centers for Disease Control and Prevention (CDC), and Gavi have partnered with research institutions and governments to generate and disseminate evidence, lower prices, and accelerate introduction. These and other organizations continue to work to improve coverage and public health impact of rotavirus vaccination today.

The cost of rotavirus vaccination varies depending on country, from a low of approximately US$0.50 in GAVI-eligible countries up to a high of US$185–$226 in the United States. Wholesale cost for GAVI has fallen by 67 percent between 2006 and 2011 to US$2.13–3.56 per dose, as part of an offer made by a pharmaceutical company to the GAVI Alliance.[8] However, the vaccine is still more expensive than most other childhood vaccines included in the WHO's Expanded Programme on Immunization.[37]

The cost in developed countries is much higher. In France, for example, the vaccine is available to the public for EUR 60.38 (Jan 2016) fully at the user's charge.[38] The table shows current[when?] prices of rotavirus vaccines in various countries and regions:[8]

The development of new vaccines intended to be offered at lower cost than the current globally approved vaccines is ongoing.[when?] Rotavac, manufactured by India-based Bharat Biotech and currently[when?] licensed only in India, plans to make the vaccine available for US$1 per dose for public markets.[39] Vaccines from Serum Institute of India, Pvt., Ltd. and Sanofi affiliate Shantha Biotechnics are currently[when?] in Phase III clinical trials.[40][41]

On March 22, 2010, the detection of DNA from porcine circovirus types 1 and 2 within RotaTeq and Rotarix prompted the FDA to suspend the use of rotavirus vaccines while conducting an investigation the finding of DNA from porcine circovirus-1 (PCV1) in the vaccine in collaboration with the 12 members of the Vaccines and Related Biological Products Advisory Committee (VRBPAC).[42] On May 6, 2010, the FDA announced its decision to revoke the suspension, stating that porcine circovirus types 1 and 2 pose no safety risks in humans and concluded that health risks involved did not offset the benefits of the vaccination.[42] In May 2010 the suspension of the Rotarix vaccine was lifted.[43]

Additional rotavirus vaccines are under development.[44] These include: a human neonatal P[6]G3 strain, RV3, developed by Ruth Bishop and colleagues in Australia; a human bovine reassortant vaccine developed by Albert Kapikian and presently undergoing development and trials in different countries; and a non-replicating rotavirus vaccine (NRRV) candidate made of the P2-VP8 fusion protein, which is currently[when?] undergoing development and trials in South Africa. Rotavirus antigens for parenteral delivery, such as the P2-VP8 candidate, can be expressed as virus-like particles prepared in baculovirus, expressed antigens, DNA vaccines, and killed virus. These novel approaches are being pursued using animal models and, in the case of the NRRV P2-VP8 candidate, clinical trials.[45]

Doctors Without Borders (MSF) developed a heat-stable version named BRV-PV. It is currently[when?] being studied.[46]

The vaccine has been associated with lower rates of type 1 diabetes.[47][48]