Hepatitis B vaccine is a vaccine that prevents hepatitis B.[1] It is given by injection, usually into muscle, but can be given under the skin in people with bleeding disorders.[6] In healthy people routine immunization results in more than 95% of people being protected.[1] Blood testing to verify that the vaccine has worked is recommended in those at high risk.[1]

The first dose is recommended within 24 hours of birth with either two or three more doses given after that.[1] This includes in those with poor immune function such as from HIV/AIDS and those born premature.[1] It is also recommended that health-care workers be vaccinated.[7] Additional doses may be needed in people with poor immune function but are not necessary for most people.[1] In those who have been exposed to the hepatitis B virus (HBV) but not immunized, hepatitis B immune globulin should be given in addition to the vaccine.[1]

Serious side effects from the hepatitis B vaccine are very uncommon.[1] Pain may occur at the site of injection.[1] It is safe for use during pregnancy or while breastfeeding.[1] It has not been linked to Guillain–Barré syndrome.[1] The hepatitis B vaccines are produced with recombinant DNA techniques.[1] They are available both by themselves and in combination with other vaccines.[1]

In the United States vaccination is recommended for nearly all babies at birth.[16] Many countries now routinely vaccinate infants against hepatitis B. In countries with high rates of hepatitis B infection, vaccination of newborns has not only reduced the risk of infection, but has also led to a marked reduction in liver cancer. This was reported in Taiwan where the implementation of a nationwide hepatitis B vaccination program in 1984 was associated with a decline in the incidence of childhood hepatocellular carcinoma.[17]

In the UK, the vaccine is offered to men who have sex with men (MSM), usually as part of a sexual health check-up. A similar situation is in operation in Ireland.[18]

In many areas, vaccination against hepatitis B is also required for all health-care and laboratory staff.[19] Both types of the vaccine, the plasma-derived vaccine (PDV) and recombinant vaccine (RV), seems to be able to elicit similar protective anti-HBs levels.[7]

Following the primary course of three vaccinations, a blood test may be taken after an interval of 1–4 months to establish if there has been an adequate response, which is defined as an anti-hepatitis B surface antigen (anti-Hbs) antibody level above 100 mIU/ml. Such a full response occurs in about 85–90% of individuals.[25]

An antibody level between 10 and 100 mIU/ml is considered a poor response, and these people should receive a single booster vaccination at this time, but do not need further retesting.[25]

People who fail to respond (anti-Hbs antibody level below 10 mIU/ml) should be tested to exclude current or past Hepatitis B infection, and given a repeat course of three vaccinations, followed by further retesting 1–4 months after the second course. Those who still do not respond to a second course of vaccination may respond to intradermal administration[26] or to a high dose vaccine[27] or to a double dose of a combined hepatitis A and B vaccine.[28] Those who still fail to respond will require hepatitis B immunoglobulin (HBIG) if later exposed to the hepatitis B virus.[25]

Poor responses are mostly associated with being over the age of 40 years, obesity, celiac disease, and tobacco smoking,[26][29] and also in alcoholics, especially if with advanced liver disease.[30] People who are immunosuppressed or on dialysis may not respond as well and require larger or more frequent doses of vaccine.[25] At least one study suggests that hepatitis B vaccination is less effective in patients with HIV.[31]

It is believed that the hepatitis B vaccine provides indefinite protection. However, it was previously believed and suggested that the vaccination would only provide effective coverage of between five and seven years,[32][33] but subsequently it has been appreciated that long-term immunity derives from immunological memory which outlasts the loss of antibody levels and hence subsequent testing and administration of booster doses is not required in successfully vaccinated immunocompetent individuals.[34][35] Hence with the passage of time and longer experience, protection has been shown for at least 25 years in those who showed an adequate initial response to the primary course of vaccinations,[36] and UK guidelines now suggest that people who respond to the vaccine and are at risk of occupational exposure, such as for healthcare workers, a single booster is recommended five years after initial immunization.[25]

The defined daily dose is not established[37]

Serious side effects from the hepatitis B vaccine are very rare.[1] Pain may occur at the site of injection.[1] It is generally considered safe for use, during pregnancy or while breastfeeding.[1][38] It has not been linked to Guillain–Barré syndrome.[1] 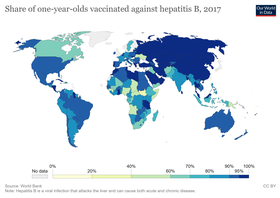 The following is a list of countries by the percentage of infants receiving three doses of hepatitis B vaccine as published by the World Health Organization (WHO) in 2017.[47]

In 1963, the American physician/geneticist Baruch Blumberg discovered what he called the "Australia Antigen" (now called HBsAg) in the serum of an Australian Aboriginal person.[48] In 1968, this protein was found to be part of the virus that causes "serum hepatitis" (hepatitis B) by virologist Alfred Prince.[49] The American microbiologist/vaccinologist Maurice Hilleman at Merck used three treatments (pepsin, urea and formaldehyde) of blood serum together with rigorous filtration to yield a product that could be used as a safe vaccine. Hilleman hypothesized that he could make an HBV vaccine by injecting patients with hepatitis B surface protein. In theory, this would be very safe, as these excess surface proteins lacked infectious viral DNA. The immune system, recognizing the surface proteins as foreign, would manufacture specially shaped antibodies, custom-made to bind to, and destroy, these proteins. Then, in the future, if the patient were infected with HBV, the immune system could promptly deploy protective antibodies, destroying the viruses before they could do any harm.[50]

Hilleman collected blood from gay men and intravenous drug users—groups known to be at risk for viral hepatitis. This was in the late 1970s, when HIV was yet unknown to medicine. In addition to the sought-after hepatitis B surface proteins, the blood samples likely contained HIV. Hilleman devised a multistep process to purify this blood so that only the hepatitis B surface proteins remained. Every known virus was killed by this process, and Hilleman was confident that the vaccine was safe.[50]

The first large-scale trials for the blood-derived vaccine were performed on gay men, in accordance with their high-risk status. Later, Hilleman's vaccine was falsely blamed for igniting the AIDS epidemic. (See Wolf Szmuness) But, although the purified blood vaccine seemed questionable, it was determined to have indeed been free of HIV. The purification process had destroyed all viruses—including HIV.[50] The vaccine was approved in 1981.[citation needed]

The blood-derived hepatitis B vaccine was withdrawn from the marketplace in 1986, when Pablo DT Valenzuela, Research Director of Chiron Corporation, succeeded in making the antigen in yeast and invented the world's first recombinant vaccine.[51] The recombinant vaccine was developed by inserting the HBV gene that codes for the surface protein into the yeast Saccharomyces cerevisiae. This allows the yeast to produce only the noninfectious surface protein, without any danger of introducing actual viral DNA into the final product.[50] This is the vaccine still in use today.[when?]

In 1976, Blumberg won the Nobel Prize in Physiology or Medicine for his work on hepatitis B (sharing it with Daniel Carleton Gajdusek for his work on kuru). In 2002, Blumberg published a book, Hepatitis B: The Hunt for a Killer Virus.[52] In the book, according to Paul A. Offit—Hilleman's biographer and an accomplished vaccinologist himself—Blumberg...

... claimed that the hepatitis B vaccine was his invention. Maurice Hilleman's name is mentioned once.... Blumberg failed to mention that it was Hilleman who had figured out how to inactivate hepatitis B virus, how to kill all other possible contaminating viruses, how to completely remove every other protein found in human blood, and how to do all of this while retaining the structural integrity of the surface protein. Blumberg had identified Australia antigen, an important first step. But all of the other steps—the ones critical to making a vaccine—belonged to Hilleman. Later, Hilleman recalled, "I think that [Blumberg] deserves a lot of credit, but he doesn't want to give credit to the other guy."[53]

Robert Purcell, a virologist, has emphasized the importance of the hepatitis B vaccine; in figuring out the hepatitis viruses, generally.[54][55]

In 2017, a two-dose HBV vaccine for adults, Heplisav-B gained U.S. Food and Drug Administration (FDA) approval.[56] It uses recombinant HB surface antigen, similar to previous vaccines, but includes a novel CpG 1018 adjuvant, a 22-mer phosphorothioate-linked oligodeoxynucleotide. It was non-inferior with respect to immunogenicity.[57]

The vaccine contains one of the viral envelope proteins, hepatitis B surface antigen (HBsAg). It is produced by yeast cells, into which the gene for HBsAg has been inserted.[58] Afterward an immune system antibody to HBsAg is established in the bloodstream. The antibody is known as anti-HBs. This antibody and immune system memory then provide immunity to HBV infection.[59]

The common brands available are Recombivax HB (Merck),[60] Engerix-B (GSK),[61] Elovac B (Human Biologicals Institute, a division of Indian Immunologicals Limited), Genevac B (Serum Institute), Shanvac B, Heplisav-B,[56] etc. These vaccines are given by the intramuscular route.

Twinrix (GSK) is a vaccine against hepatitis A and hepatitis B.[62][63]

Pediarix is a vaccine against diphtheria, tetanus, pertussis, hepatitis B, and poliomyelitis.[64]

Vaxelis is a vaccine against diphtheria, tetanus, pertussis, poliomyelitis, Haemophilus influenzae type B (Meningococcal Protein Conjugate), and hepatitis B.[65][66]