Rabies vaccine is a vaccine used to prevent rabies.[2] There are a number of vaccines available that are both safe and effective.[2] They can be used to prevent rabies before and for a period of time after exposure to the virus such as by a dog or bat bite.[2] The immunity that develops is long lasting after a full course.[2] Doses are usually given by injection into the skin or muscle.[2] After exposure vaccination is typically used along with rabies immunoglobulin.[2] It is recommended that those who are at high risk of exposure be vaccinated before potential exposure.[2] Vaccines are effective in humans and other animals.[2] Vaccinating dogs is very effective in preventing the spread of rabies to humans.[2]

Rabies vaccines may be safely used in all age groups.[2] About 35 to 45 percent of people develop a brief period of redness and pain at the injection site.[2] About 5 to 15 percent of people may have fever, headaches, or nausea.[2] After exposure to rabies there is no contraindication to its use.[2] Most vaccines do not contain thimerosal.[2]

The first rabies vaccine was introduced in 1885, and was followed by an improved version in 1908.[3] Millions of people globally have been vaccinated and it is estimated that this saves more than 250,000 people a year.[2] It is on the World Health Organization's List of Essential Medicines.[4] The wholesale cost in the developing world is between US$44 and US$78 for a course of treatment as of 2014.[5] In the United States a course of rabies vaccine is more than US$750.[6]

The World Health Organization (WHO) recommends vaccinating in those who are at high risk of the disease including children who live in areas where it is common.[2] Other groups may include veterinarians, researchers, or people planning to travel to regions where rabies is common.[7] Three doses of the vaccine are given over a one-month period on days zero, seven, and either twenty-one or twenty-eight.[7][2]

For individuals who have been potentially exposed to the virus, four doses over two weeks are recommended, as well as an injection of rabies immunoglobulin with the first dose.[8] This is known as post exposure vaccinations.[9] For people who have previously been vaccinated, only a single dose of the rabies vaccine is required.[9] Vaccination after exposure is neither a treatment nor a cure for rabies; it can only prevent the development of rabies in a person if given before the virus reaches the brain.[9] Because the rabies virus has a relatively long incubation period, post exposure vaccinations are typically highly effective.[2]

Immunity following a course of doses is typically long lasting.[2] Additional doses are not typically needed except in those at very high risk.[2] Those at high risk may have tests done to measure rabies antibody in the blood, and then get rabies boosters as needed.[7] Following administration of a booster dose, one study found 97% of immuno-competent individuals demonstrate protective levels of neutralizing antibodies at 10 years.[10]

The defined daily dose is not established[11]

Rabies vaccines are safe in all age groups.[2][12] About 35 to 45 percent of people develop a brief period of redness and pain at the injection site.[2] About 5 to 15 percent of people may have fever, headaches, or nausea.[2] Because rabies is invariably fatal, there is no contraindication to its use after exposure.[2]

Most vaccines do not contain thimerosal.[2] Vaccines made from nerve tissue are used in a few countries, mainly in Asia and Latin America, but are less effective and have greater side effects.[2] Their use is thus not recommended by the World Health Organization.[2]

In addition to these developments, newer and less expensive purified chicken embryo cell vaccines (CCEEV) and purified Vero cell rabies vaccines are now available and are recommended for use by the WHO.[2] The purified Vero cell rabies vaccine uses the attenuated Wistar strain of the rabies virus, and uses the Vero cell line as its host. CCEEVs can be used in both pre and post exposure vaccinations. CCEEVs use inactivated rabies virus grown from either embryonated eggs or in cell cultures and are safe for use in humans and animals.[2][14]

Virtually all infections with rabies resulted in death until two French scientists, Louis Pasteur and Émile Roux, developed the first rabies vaccination in 1885. Nine-year-old Joseph Meister (1876–1940), who had been mauled by a rabid dog, was the first human to receive this vaccine.[15] The treatment started with subcutaneous injection on 6 July 1885, at 8:00 PM, which was followed with 12 additional doses administered over the following 10 days. The first injection was derived from the spinal cord of an inoculated rabbit which had died of rabies 15 days earlier. All the doses were obtained by attenuation but later ones were progressively more virulent.[16]

Pasteur-Roux vaccine attenuated the harvested virus samples by allowing them to dry for 5 to 10 days. Similar nerve tissue-derived vaccines are still used now in some countries, and while they are much cheaper than modern cell culture vaccines, they are not as effective.[17] Neural tissue vaccines also carry a certain risk of neurological complications.[18]

A limitation to acquiring preexposure rabies immunization for travellers from developed countries, has been the cost of the vaccine, which requires 3 clinic visits prior to travel. In 2015, in the United States, a course of three IM doses could exceed $1,000 in cost.[19]

Even after the modern cell-culture rabies vaccine was first introduced, in the early 1980s, the cost of $45 per dose was considered to be too expensive.

However, "intradermal (ID) rabies immunization began almost as soon as the intramuscular (IM) human diploid cell vaccine (HDCV) was manufactured. By reconstituting the 1.0 mL of vaccine in the vial, practitioners could draw up approximately eight 0.1-mL doses. One problem was that the entire vial had to be used within a few hours of reconstituting, meaning that a provider had to either be in a busy clinic or line up groups of people, such as families, for rabies immunization at the same time."[19] 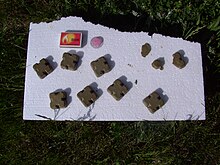 Baits with vaccine for oral vaccination 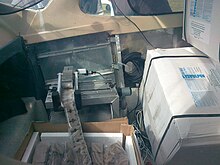 Machine for distribution of baits from airplane

Pre-exposure immunization has been used on domesticated and wild populations. In many jurisdictions, domestic dogs, cats, ferrets, and rabbits are required to be vaccinated.[20]

Aside from vaccinating humans, another approach was also developed by vaccinating dogs to prevent the spread of the virus. In 1979 the Van Houweling Research Laboratory of the Silliman University Medical Center in Dumaguete in the Philippines[21] developed and produced a dog vaccine that gave a three-year immunity from rabies. The development of the vaccine resulted in the elimination of rabies in many parts of the Visayas and Mindanao Islands. The successful program in the Philippines was later used as a model by other countries, such as Ecuador and the Yucatan State of Mexico, in their fight against rabies conducted in collaboration with the World Health Organization.[22]

In Tunisia a rabies control program was initiated to give dog owners free vaccination to promote mass vaccination which was sponsored by their government. The vaccine is known as Rabisin (Mérial), which is a cell based rabies vaccine only used countrywide. Vaccinations are often administered when owners take in their dogs for check-ups and visits at the vet.[23]

Wildlife species, primarily bats, raccoons, skunks, and foxes, act as reservoir species for different variants of the rabies virus.[12][24] This results in the general occurrence of rabies as well as outbreaks in animal populations.[24] Approximately 90% of all reported rabies cases in the US are from wildlife.[24]

There is an oral vaccination in pellet form which can be left out for wild animals to produce a herd immunity effect.[25] Oral rabies vaccination (ORV) programs have been used in many countries in an effort to control the spread of rabies and limit the risk of human contact with the rabies virus.[24] ORV programs were initiated in Europe in the 1980s, Canada in 1985, and in the United States in 1990.[26] ORV is a preventive measure to eradicate rabies in wild animal vectors of disease, mainly foxes, raccoons, raccoon dogs, coyotes and jackals, but also can be used for dogs in developing countries.[27] ORV programs typically use edible baits to deliver the vaccine to targeted animals. ORV baits consist of a small packet containing the oral vaccine which is then either coated in a fishmeal paste or encased in a fishmeal-polymer block.[24] When an animal bites into the bait, the packets burst and the vaccine is administered.[26] Current research suggests that if adequate amounts of the vaccine is ingested, immunity to the virus should last for upwards of one year.[28] By immunizing wild or stray animals, ORV programs work to create a buffer zone between the rabies virus and potential contact with humans, pets, or livestock.[26] The effectiveness of ORV campaigns in specific areas is determined through trap-and-release methods.[29] Titer tests are performed on the blood drawn from the sample animals in order to measure rabies antibody levels in the blood.[29] Baits are usually distributed by aircraft to more efficiently cover large, rural regions. In order to place baits more precisely and to minimize human and pet contact with baits, however, they are distributed by hand in suburban or urban regions.[26] The potential for human contact with baits is a present concern for OPV programs, but the oral vaccine does not contain the whole rabies virus and has been proven safe in over 60 animal species including cats and dogs.[28] The idea of wildlife vaccination was conceived during the 1960s, and modified-live rabies viruses were used for the experimental oral vaccination of carnivores by the 1970s. The development of safe and effective rabies virus vaccines applied in attractive baits resulted in the first field trials in Switzerland in 1978 to immunize red foxes.[30] ORV programs have seen success in preventing the westward spread of raccoon variant rabies in the United States and even eradicating rabies in red foxes in Switzerland.[31][32]

Imrab is an example of a veterinary rabies vaccine containing the Pasteur strain of killed rabies virus. Several different types of Imrab exist, including Imrab, Imrab 3, and Imrab Large Animal. Imrab 3 has been approved for ferrets and, in some areas, pet skunks.[33][34] The reason why these oral vaccines that enter the body through the GI tract are able to convey resistance to rabies is due to the usage of a live human adenovirus type 5 vector. Adenovirus, a common viral pathogen that infects the GI tract and causes diarrhea is genetically altered to express rabies surface proteins, thereby allowing the adenovirus to infect GI tract cells. This enables the viral vector to infect cells in the GI and stimulate a cellular and humoral response that would provide immunity in the case of being bitten by an infected animal and being infected via blood.[medical citation needed]