Tetanus vaccine, also known as tetanus toxoid (TT), is an inactive vaccine used to prevent tetanus.[1] It is used in combination with diphtheria vaccine.[2] During childhood, five doses are recommended, with a sixth given during adolescence.[1] After three doses, almost everyone is initially immune.[1] Some countries just give six doses; while others, such as the USA, recommend boosters every ten years.[1][3] A booster shot may be given within 48 hours of an injury to people whose immunization is out of date.[4] For people with high-risk injuries who are not fully immunized, tetanus antitoxin may also be recommended.[1] Confirming that pregnant women are up to date on tetanus immunization during each pregnancy can prevent both maternal and neonatal tetanus.[1][5][6]

The vaccine is very safe, including during pregnancy and in those with HIV/AIDS.[1] Redness and pain at the site of injection occur in between 25% and 85% of people.[1] Fever, feeling tired, and minor muscle pain occurs in less than 10% of people.[1] Severe allergic reactions occur in less than one in 100,000 people.[1]

A number of vaccine combinations include the tetanus vaccine, such as DTaP and Tdap, which contain diphtheria, tetanus, and pertussis vaccines, and DT and Td, which contain diphtheria and tetanus vaccines.[7] DTaP and DT are given to children less than seven years old, while Tdap and Td are given to those seven years old and older.[7][8] The lowercase d and p denote lower strengths of diphtheria and pertussis vaccines.[7] 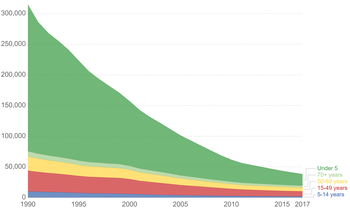 In the 1940s, before the vaccine, there was about 550 cases of tetanus per year in the United States which has decreased to about 30 cases per year in the 2000s.[3] Nearly all cases are among those who have never received a vaccine, or adults who don't stay up to date on their 10-year booster shots.[19]

Guidelines on prenatal care in the United States specify that women should receive a dose of the Tdap vaccine during each pregnancy, preferably between weeks 27 and 36, to allow antibody transfer to the fetus.[5][6] All postpartum women who have not previously received the Tdap vaccine are recommended to get it prior to discharge after delivery.[20] It is recommended for pregnant women who have never received the tetanus vaccine (i.e., neither DTP or DTaP, nor DT as a child or Td or TT as an adult) to receive a series of three Td vaccinations starting during pregnancy to ensure protection against maternal and neonatal tetanus. In such cases, Tdap is recommended to be substituted for one dose of Td, again preferably between 27 and 36 weeks of gestation, and then the series completed with Td.[5][6]

The first vaccine is given in infancy. The baby is injected with the DTaP vaccine, which is three inactive toxins in one injection. DTaP protects against diphtheria, pertussis, and tetanus. This vaccine is safer than the previously used DTP.[7] Another option is DT, which is a combination of diphtheria and tetanus vaccines. This is given as an alternative to infants who have conflicts with the DTaP vaccine.[17] Quadrivalent, pentavalent, and hexavalent formulations contain DTaP with one or more of the additional vaccines: inactivated polio virus vaccine (IPV), Haemophilus influenzae type b conjugate, Hepatitis B, with the availability varying in different countries.[21][22][23]

For the every ten-year booster Td or Tdap may be used, though Tdap is more expensive.[6]

In children less than a year old, the recommended location for injection is the anterolateral thigh muscle while in older people the deltoid muscle is used.[1] This pertains to tetanus toxoid T-containing vaccines which are a standard dose of 0.5 ml.[1]

The World Health Organization (WHO) recommends six doses in childhood starting at six weeks of age.[1] Four doses of DTaP are to be given in early childhood.[17] The first dose should be around two months of age, the second at four months, the third at six, and the fourth from fifteen to eighteen months of age.[1] Doses should be give at least 4 weeks apart.[1] There is a recommended fifth dose to be administered to four- to six-year-olds and a sixth dose around 8 years.[17][1]

Td and Tdap are for older children, adolescents, and adults and can be injected into the deltoid muscle.[17]

Td and Tdap are the booster shots given in adults nineteen years of age to sixty-five years of age.[7][6] It is safe to have shorter intervals between a single dose of Tdap and a dose of the Td booster.[25]

Tdap is given as a one-time, first-time-only dose that includes the tetanus, diphtheria, and acellular pertussis vaccinations.[7] This should not be administered to those who are under the age of eleven or over the age of sixty-five.[medical citation needed]

Td is the booster shot given to people over the age of seven and includes the tetanus and diphtheria toxoids. However, Td has less of the diphtheria toxoid, which is why the "d" is lowercase and the "T" is capitalized.[7]

In 2020, the US Centers for Disease Control and Prevention (CDC) Advisory Committee on Immunization Practices (ACIP) recommended that either tetanus and diphtheria toxoids (Td) vaccine or Tdap to be used for the decennial Td booster, tetanus prevention during wound management, and for additional required doses in the catch-up immunization schedule if a person has received at least one Tdap dose.[6] 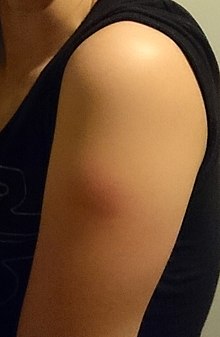 A bump resulting from a tetanus vaccine injection

Common side effects of the tetanus vaccine include fever, redness, and swelling with soreness or tenderness around the injection site (one of five people have redness or swelling). Body aches and tiredness have been reported following Tdap. Td / Tdap can cause painful swelling of the entire arm in one of 500 people.[17][26] Tetanus toxoid containing vaccines (DTaP, DTP, Tdap, Td, DT) may cause brachial neuritis at a rate of one out of every 100,000 to 200,000 doses.[3][27]

The type of vaccination for this disease is called artificial active immunity. This type of immunity is generated when a dead or weakened version of the disease enters the body, causing an immune response which includes the production of antibodies. This is beneficial because it means that if the disease is ever introduced into the body, the immune system will recognize the antigen and produce antibodies more rapidly.[28]

The first vaccine for passive immunology was discovered by a group of German scientists under the leadership of Emil von Behring in 1890. The first inactive tetanus toxoid was discovered and produced in 1924. A more effective adsorbed version of the vaccine, created in 1938, was proven to be successful when it was used to prevent tetanus in the military during World War II.[17] DTP (which is the combined vaccine for diphtheria, tetanus, and pertussis) was first used in 1948, and was continued until 1991, when it was replaced with an acellular form of the pertussis vaccine due to safety concerns.[29] Half of those who received the DTP vaccine had redness, swelling, and pain around the injection site,[17] which convinced researchers to find a replacement vaccine.

Two new vaccines were launched in 1992. These combined tetanus and diphtheria with acellular pertussis (TDaP or DTaP), which could be given to adolescents and adults (as opposed to previously when the vaccine was only given to children).[17]