Measles vaccine is a vaccine that prevents measles.[1] Nearly all of those who do not develop immunity after a single dose develop it after a second dose.[1] When rates of vaccination within a population are greater than 92%, outbreaks of measles typically no longer occur; however, they may occur again if rates of vaccination decrease.[1] The vaccine's effectiveness lasts many years.[1] It is unclear if it becomes less effective over time.[1] The vaccine may also protect against measles if given within a couple of days after exposure to measles.[1]

The vaccine is generally safe, even for those with HIV infections.[1][2] Most children do not experience any side effects.[3] Side effects if they do occur are usually mild, such as fever, rash, pain at the site of injection, and joint stiffness; and are short lived.[1][3] Anaphylaxis has been documented in about 3.5–10 cases per million doses.[1] Rates of Guillain–Barré syndrome, autism and inflammatory bowel disease do not appear to be increased by measles vaccination.[1]

The vaccine is available both by itself and in combinations such as the MMR vaccine (a combination with the rubella vaccine and mumps vaccine)[1] or the MMRV vaccine (a combination of MMR with the chickenpox vaccine).[4][5][6] The measles vaccine is equally effective for preventing measles in all formulations, but side effects vary depending with the combination.[1][7] The World Health Organization (WHO) recommends measles vaccine be given at nine months of age in areas of the world where the disease is common, or at twelve months where the disease is not common.[1] Measles vaccine is based on a live but weakened strain of measles.[1] It comes as a dried powder which is mixed with a specific liquid before being injected either just under the skin or into a muscle.[1] Verification that the vaccine was effective can be determined by blood tests.[1]

In 1963, the Edmonston-B strain of measles virus was turned into a vaccine and licensed in the United States.[8] In 1968, an improved and even weaker measles vaccine began to be distributed and has been the only measles vaccine used in the United States since 1968.[8] About 85% of children globally have received this vaccine as of 2013.[9] In 2015, at least 160 countries provided two doses in their routine immunization.[10] The measles vaccine was first introduced in 1963.[11] It is on the World Health Organization's List of Essential Medicines.[12] The wholesale cost in the developing world is about 0.70 USD per dose as of 2015.[13] As outbreaks easily occur in under-vaccinated populations, the disease is seen as a test of sufficient vaccination within a population.[14]

Measles cases reported in the United States before and after introduction of the vaccine. 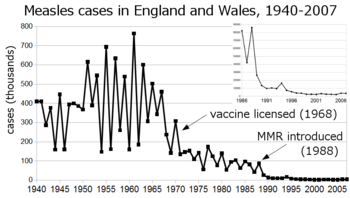 One dose is about 93% effective while two doses of the vaccine are about 97% effective at preventing measles.[2] Before the widespread use of the vaccine, measles was so common that infection was considered "as inevitable as death and taxes."[15] In the United States, reported cases of measles fell from 3 to 4 million with 400 to 500 deaths to tens of thousands per year following introduction of two measles vaccines in 1963 (both an inactivated and a live attenuated vaccine (Edmonston B strain) were licensed for use, see chart at right).[2][16] Increasing uptake of the vaccine following outbreaks in 1971 and 1977 brought this down to thousands of cases per year in the 1980s. An outbreak of almost 30,000 cases in 1990 led to a renewed push for vaccination and the addition of a second vaccine to the recommended schedule. No more than 220 cases were reported in any year from 1997 to 2013, and the disease was believed no longer endemic in the United States.[17][18][19] In 2014, 667 cases were reported.[20]

The benefit of measles vaccination in preventing illness, disability, and death have been well documented. Within the first 20 years of being licensed in the U.S., measles vaccination prevented an estimated 52 million cases of the disease, 17,400 cases of mental retardation, and 5,200 deaths.[21] During 1999–2004, a strategy led by the World Health Organization (WHO) and UNICEF led to improvements in measles vaccination coverage that averted an estimated 1.4 million measles deaths worldwide.[22] The vaccine for measles has led to the near-complete elimination of the disease in the United States and other developed countries.[23] While the vaccine is made with a live virus which can cause side effects, these are far fewer and less serious than the sickness and death caused by measles itself, side effects ranging from rashes to, rarely, convulsions, occur in a small percentage of recipients.[24]

Measles is common worldwide. Although it was declared eliminated from the U.S. in 2000, high rates of vaccination and excellent communication with those who refuse vaccination are needed to prevent outbreaks and sustain the elimination of measles in the U.S.[25] Of the 66 cases of measles reported in the U.S. in 2005, slightly over half were attributable to one unvaccinated teenager who acquired measles during a visit to Romania.[26] This individual returned to a community with many unvaccinated children. The resulting outbreak infected 34 people, mostly children and virtually all unvaccinated; three of them were hospitalized. The public health response required making almost 5,000 phone calls as part of contact tracing, arranging and performing testing as needed, and arranging emergency vaccination for at-risk people who had contact with this person.[25] Taxpayers and local healthcare organizations likely paid more than US$167,000 in direct costs to contain this one outbreak.[25] A major epidemic was averted due to high rates of vaccination in the surrounding communities.[25]

The vaccine has non specific effects such as preventing respiratory infections, that may be greater than those of measles prevention alone. These benefits are greater when the vaccine is given before one year of age. A high titre vaccine resulted in worse outcomes in girls and thus is not recommended by the World Health Organization.[27] 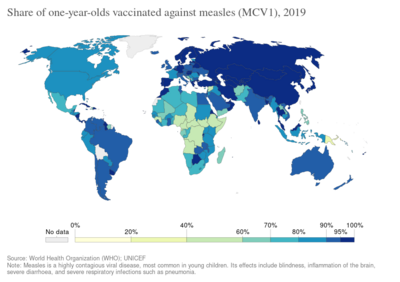 The World Health Organization (WHO) recommends two doses of vaccine for all children.[1] In countries with high risk of disease the first dose should be given around nine months of age.[1] Otherwise it can be given at twelve months of age.[1] The second dose should be given at least one month after the first dose.[1] This is often done at age 15 to 18 months.[1] After one dose at the age of nine months 85% are immune, while a dose at twelve months results in 95% immunity.[11]

In the United States, the Centers for Disease Control and Prevention (CDC) recommends that children aged six to eleven months traveling outside the United States receive their first dose of MMR vaccine before departure[28] and then receive two more doses; one at 12–15 months (12 months for children in high-risk areas) and the second as early as four weeks later.[29] Otherwise the first dose is typically given at 12–15 months and the second at 4–6 years.[29]

In the UK, the National Health Service (NHS) recommendation is for a first dose at around 13 months of age and the second at three years and four months old.[30][31]

In Canada, Health Canada recommends that children traveling outside North America should receive an MMR vaccine if they are aged six to 12 months. However, after the child is 12 months old they should receive two additional doses to ensure long-lasting protection.[32]

The defined daily dose is not established.[33]

Side effects associated with the MMR vaccine include fever, rash, injection site pain and, in rare cases, red or purple discolorations on the skin known as thrombocytopenic purpura, or seizures related to fever (febrile seizure).[34][35]

Numerous studies have found no relationship between MMR vaccine and autism.[36][37][38][35]

Some people may not be able to receive the measles or MMR vaccine:

Cases of measles and deaths per 100000, per year, in the United States over the 20th century

As a fellow at Children's Hospital Boston, Thomas C. Peebles worked with John Franklin Enders. Enders became known as "The Father of Modern vaccines", and Enders shared the Nobel Prize in Physiology or Medicine in 1954 for his research on cultivating the polio virus that led to the development of a vaccination for the disease.

Switching to study measles, Enders sent Peebles to Fay School in Massachusetts, where an outbreak of the disease was under way, and there Peebles was able to isolate the virus from some of the blood samples and throat swabs he had taken from the students. Even after Enders had taken him off the study team, Peebles was able to cultivate the virus and show that the disease could be passed on to monkeys inoculated with the material he had collected.[23] Enders was able to use the cultivated virus to develop a measles vaccine in 1963 based on the material isolated by Peebles.[41]

In the late 1950s and early 1960s, nearly twice as many children died from measles as from polio.[42] The vaccine Enders developed was based on the Edmonston strain of attenuated live measles virus, which was named for the 11-year-old David Edmonston, the Fay student from whom Peebles had taken the culture that led to the virus's cultivation.[43]

In the mid-20th century, measles was particularly devastating in West Africa, where child mortality rates were 50 percent before age 5, and the children were struck with the type of rash and other symptoms common prior to 1900 in England and other countries. The first trial of a live attenuated measles vaccine was undertaken in 1960 by the British paediatrician David Morley in a village near Ilesha, Nigeria; in case he could be accused of exploiting the Nigerian population, Morley included his own four children in the study. The encouraging results led to a second study of about 450 children in the village and at the Wesley Guild Hospital in Ilesha.

Following another epidemic, a larger trial was undertaken in September and October 1962, in New York City with the assistance of the World Health Organization (WHO): 131 children received the live Enders attenuated Edmonston B strain plus gamma globulin, 130 children received a "further attenuated" vaccine without gamma globulin, and 173 children acted as control subjects for both groups. As also shown in the Nigerian trial, the trial confirmed that the "further attenuated" vaccine was superior to the Edmonston B vaccine, and caused significantly fewer instances of fever and diarrhea. The successful results led to 2,000 children in the area being vaccinated.[44][45]

Maurice Hilleman at Merck & Co., a pioneer in the development of vaccinations, developed the MMR vaccine in 1971, which vaccinates against measles, mumps and rubella in a single shot followed by a booster.[24][46] One form is called "Attenuvax".[47] The measles component of the MMR vaccine uses Attenuvax,[48] which is grown in a chick embryo cell culture using the Enders' attenuated Edmonston strain.[48] Following ACIP recommendations, Merck decided not to resume production of Attenuvax as standalone vaccine on 21 October 2009.[49]

Measles is seldom given as an individual vaccine and is often given in combination with rubella, mumps, or varicella (chickenpox) vaccines.[1] Below is the list of measles-containing vaccines:

Most health insurance plans in the United States cover the cost of vaccines, and Vaccines for Children Program may be able to help those who do not have coverage.[52] State law requires vaccinations for school children, but offer exemptions for medical reasons and sometimes for religious or philosophical reasons.[53] All fifty states require 2 doses of the MMR vaccine at the appropriate age.[54]