From WikiProjectMed
Jump to navigation Jump to search
Not to be confused with Variola vaccine.

Varicella vaccine, also known as chickenpox vaccine, is a vaccine that protects against chickenpox.[3] One dose of vaccine prevents 95% of moderate disease and 100% of severe disease.[4] Two doses of vaccine are more effective than one, resulting in milder breakthrough disease if this occur.[5] If given to those who are not immune within five days of exposure to chickenpox to prevent disease.[4] Vaccinating a large portion of the population also protects those who are not vaccinated.[4] It is given by injection just under the skin.[4]

The World Health Organization (WHO) recommends routine vaccination only if a country can keep more than 80% of people vaccinated.[4] If only 20% to 80% of people are vaccinated it is possible that more people will get the disease at an older age and outcomes overall may worsen.[4] Either one or two doses of the vaccine is recommended.[4] In the United States two doses are recommended starting at twelve to fifteen months of age.[3] As of 2017[update], twenty-three countries recommend all non-medically exempt children receive the vaccine, nine recommend it only for high risk groups, three additional countries recommend use in only parts of the country, while other countries make no recommendation.[6] Not all countries provide the vaccine due to its cost.[7]

Minor side effects may include pain at the site of injection, fever, and rash.[3] Severe side effects are rare and occur mostly in those with poor immune function.[4] Its use in people with HIV/AIDS should be done with care.[4] It is not recommended during pregnancy; however, the few times it has been given during pregnancy no problems resulted.[3][4] The vaccine is available either by itself or along with the MMR vaccine, in a version known as the MMRV vaccine.[4] It is made from weakened virus.[3]

Takahashi developed the first live attenuated varicella vaccine in 1974.[8] GSK's Varilrix became commercially available in 1984, initially for high risk children, and then for healthy children in 1995.[8] Merck's Varivax became available later in Europe.[8] It is on the World Health Organization's List of Essential Medicines.[9] In the United States it costs about 142 USD per dose as of 2020, though the US CDC can get it for about 110 USD.[10][11] In some countries it is avaliable for about 17 USD as of 2013.[12] 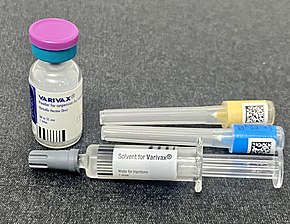 Varicella vaccine is 70% to 90% effective for preventing varicella and more than 95% effective for preventing severe varicella.[13] Follow-up evaluations have taken place in the United States of children immunized that revealed protection for at least 11 years. Also, studies were conducted in Japan which indicated protection for at least 20 years.[13]

People who do not develop enough protection when they get the vaccine may develop a mild case of the disease when in close contact with a person with chickenpox. In these cases, people show very little sign of illness. This has been the case of children who get the vaccine in their early childhood and later have contact with children with chickenpox. Some of these children may develop a mild chickenpox also known as breakthrough disease.[14]

The long-term duration of protection from varicella vaccine is unknown, but there are now persons vaccinated twenty years ago with no evidence of waning immunity, while others have become vulnerable in as few as six years. Assessments of duration of immunity are complicated in an environment where natural disease is still common, which typically leads to an overestimation of effectiveness.[17]

Some vaccinated children have been found to lose their protective antibody in as little as five to eight years.[18] However, according to the World Health Organization: "After observation of study populations for periods of up to 20 years in Japan and 10 years in the United States, more than 90% of immunocompetent persons who were vaccinated as children were still protected from varicella." However, since only one out of five Japanese children were vaccinated, the annual exposure of these vaccinees to children with natural chickenpox boosted the vaccinees' immune system. In the United States, where universal varicella vaccination has been practiced, the majority of children no longer receive exogenous (outside) boosting, thus, their cell-mediated immunity to VZV (varicella zoster virus) wanes—necessitating booster chickenpox vaccinations.[19] As time goes on, boosters may be necessary. Persons exposed to the virus after vaccine tend to experience milder cases of chickenpox.[20]

Catching "wild" chickenpox as a child has been thought to commonly result in lifelong immunity. Indeed, parents have deliberately ensured this in the past with "pox parties". Historically, exposure of adults to contagious children has boosted their immunity, reducing the risk of shingles.[21] The CDC and corresponding national organizations are carefully observing the failure rate which may be high compared with other modern vaccines—large outbreaks of chickenpox having occurred at schools which required their children to be vaccinated.[22]

During 2003, and the first half of 2004, the US Centers for Disease Control and Prevention (CDC) reported eight deaths from varicella, six of whom were children or adolescents. These deaths and hospital admissions have substantially declined in the US due to vaccination,[24][25] though the rate of shingles infection has increased as adults are less exposed to infected children (which would otherwise help protect against shingles).[26][27][28] Ten years after the vaccine was recommended in the US, the CDC reported as much as a 90% drop in chickenpox cases, a varicella-related hospital admission decline of 71%[23] and a 97% drop in chickenpox deaths among those under 20.[29]

Vaccines are less effective among high-risk patients, as well as being more dangerous because they contain attenuated live virus. In a study performed on children with an impaired immune system, 30% had lost the antibody after five years, and 8% had already caught wild chickenpox in that five-year period.[30]

Adult shingles cases may increase after introduction of varicella vaccine, but evidence is unclear.[21][27][32][33] While research using computer models has tended to support the hypothesis that vaccination programs would increase incidence of zoster in the short term, the evidence from epidemiological studies is mixed,[34][35] and increases observed in zoster incidence in some studies may not be related to vaccination programs, as the incidence increases prior to the varicella vaccine program being initiated.[36]

Regarding herpes zoster, the US Centers for Disease Control and Prevention (CDC) stated in 2014: "Chickenpox vaccines contain weakened live VZV, which may cause latent (dormant) infection. The vaccine-strain VZV can reactivate later in life and cause shingles. However, the risk of getting shingles from vaccine-strain VZV after chickenpox vaccination is much lower than getting shingles after natural infection with wild-type VZV."[3]

The World Health Organization (WHO) recommends one or two doses with the initial dose given at 12 to 18 months of age.[4] The second dose, if given, should occur at least one to three months later.[4] The second dose, if given, provides the additional benefit of improved protection against all varicella.[37] This vaccine is a shot given subcutaneously (under the skin). It is recommended for all children under 13 and for everyone 13 or older who has never had chickenpox.[citation needed]

In the United States, two doses are recommended by the Centers for Disease Control and Prevention (CDC). For a routine vaccination, the first dose is administered at 12 to 15 months of age and a second dose at age 4–6 years. However, the second dose can be given as early as 3 months after the first dose. If an individual misses the timing for the routine vaccination, the individual is eligible to receive a catch-up vaccination. For a catch-up vaccination, individuals between 7 and 12 years old should receive a 2-dose series 3 months apart (a minimum interval of 4 weeks). For individuals 13–18 years old, the catch-up vaccination should be given 4 to 8 weeks apart (a minimum interval of 4 weeks).[38] The varicella vaccine did not become widely available in the United States until 1995.[39]

In the UK, the vaccine is only recommended in people who are particularly vulnerable to chickenpox.[40] As there is an increased risk of shingles in adults due to possible lack of contact with chickenpox-infected children providing a natural boosting to immunity, and the fact that chickenpox is usually a mild illness, the National Health Service cites concerns about unvaccinated children catching chickenpox as adults when it is more dangerous.[40]

The defined daily dose is not established.[41]

Serious side effects are very rare. From 1998 to 2013, only one vaccine-related death was reported: an English child with pre-existent leukemia. On some occasions, severe reactions such as meningitis and pneumonia have been reported (mainly in inadvertently vaccinated immunocompromised children) as well as anaphylaxis.[31]

There is a short-term risk of developing herpes zoster (shingles) following vaccination. However, this risk is less than the risk due to a natural infection resulting in chickenpox.[46]: 378  Most of the cases reported have been mild and have not been associated with serious complications.[47]

Approximately 5% of children who receive the vaccine develop a fever or rash. Adverse reaction reports for the period 1995 to 2005 found no deaths attributed to the vaccine despite approximately 55.7 million doses being delivered.[48] Cases of vaccine-related chickenpox have been reported in patients with a weakened immune system,[49][50] but no deaths.

The Varicella zoster vaccine is made from the Oka/Merck strain of live attenuated varicella virus.[8] The Oka virus was initially obtained from a child with natural varicella, introduced into human embryonic lung cell cultures, adapted to and propagated in embryonic guinea pig cell cultures, and finally propagated in human diploid cell cultures.[52][53] This strain was further developed by pharmaceutical companies such as Merck & Co. and GlaxoSmithKline.[54]

Japan was among the first countries to vaccinate for chickenpox. The vaccine was first licensed in the United States in 1995.[55] Routine vaccination against varicella zoster virus is also performed in the United States, and the incidence of chickenpox has been dramatically reduced there (from four million cases per year in the pre-vaccine era to approximately 400,000 cases per year as of 2005[update]). In Europe, most countries do not vaccinate against varicella, though the vaccine is gaining wider acceptance.[citation needed] Australia, Canada, and other countries have adopted recommendations for routine immunization of children and susceptible adults against chickenpox.[citation needed]

Other countries, such as the United Kingdom, have targeted recommendations for the vaccine, e.g., for susceptible health care workers at risk of varicella exposure. In the UK, varicella antibodies are measured as part of the routine of prenatal care, and by 2005 all National Health Service personnel had determined their immunity and been immunized if they were non-immune and have direct patient contact. Population-based immunization against varicella is not otherwise practised in the UK.[56]

Since 2013, the MMRV vaccine is offered for free to all Brazilian citizens.[citation needed]

The Catholic church deems the vaccine morally acceptable to use despite its development involving cell lines derived from abortion.[58]