Excessive amount commonly results in weakness, headache, nausea, constipation, urinary tract infections, and abdominal pain.[7][10] Serious side effects may include high blood calcium and anaphylaxis.[7] Regular blood tests are recommended after the medication is started and when the dose is changed.[10] Calcitriol increases blood calcium (Ca2+) mainly by increasing the uptake of calcium from the intestines.[7]

Calcitriol is prescribed for:[14]

Calcitriol has been used in an ointment for the treatment of psoriasis,[15] although the vitamin D analogue calcipotriol (calcipotriene) is more commonly used.[16] Calcitriol has also been given by mouth for the treatment of psoriasis[17] and psoriatic arthritis.[18] Research on the noncalcemic actions of calcitriol and other VDR-ligand analogs and their possible therapeutic applications has been reviewed.[19]

The defined daily dose is 1 microgram by mouth or by injection.[8]

The main adverse drug reaction associated with calcitriol therapy is hypercalcemia – early symptoms include: nausea, vomiting, constipation, anorexia, apathy, headache, thirst, pruritus, sweating, and/or polyuria. Compared to other vitamin D compounds in clinical use (cholecalciferol, ergocalciferol), calcitriol has a higher risk of inducing hypercalcemia. However, such episodes may be shorter and easier to treat due to its relatively short half-life.[14]

Calcitriol acts in concert with parathyroid hormone (PTH) in all three of these roles. For instance, PTH also indirectly stimulates osteoclasts. However, the main effect of PTH is to increase the rate at which the kidneys excrete inorganic phosphate (Pi), the counterion of Ca2+
. The resulting decrease in serum phosphate causes hydroxyapatite (Ca5(PO4)3OH) to dissolve out of bone thus increasing serum calcium. PTH also stimulates the production of calcitriol (see below).[21]

Many of the effects of calcitriol are mediated by its interaction with the calcitriol receptor, also called the vitamin D receptor or VDR.[22] For instance, the unbound inactive form of the calcitriol receptor in intestinal epithelial cells resides in the cytoplasm. When calcitriol binds to the receptor, the ligand-receptor complex translocates to the cell nucleus, where it acts as a transcription factor promoting the expression of a gene encoding a calcium binding protein. The levels of the calcium binding protein increase enabling the cells to actively transport more calcium (Ca2+
) from the intestine across the intestinal mucosa into the blood.[21]

The maintenance of electroneutrality requires that the transport of Ca2+
ions catalyzed by the intestinal epithelial cells be accompanied by counterions, primarily inorganic phosphate. Thus calcitriol also stimulates the intestinal absorption of phosphate.[21]

Calcitriol also inhibits the release of calcitonin,[23] a hormone which reduces blood calcium primarily by inhibiting calcium release from bone.[21]

Biosynthesis and its regulation 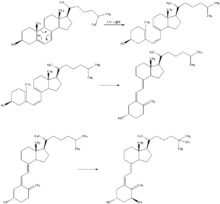 Calcitriol is produced in the cells of the proximal tubule of the nephron in the kidneys by the action of 25-hydroxyvitamin D3 1-alpha-hydroxylase, a mitochondrial oxygenase and an enzyme which catalyzes the hydroxylation of 25-hydroxycholecalciferol (calcifediol) in the 1-alpha position.

The activity of this enzyme is stimulated by PTH. This is an important control point in Ca2+ homeostasis.[21] Additional effects on the production of calcitriol include an increase by prolactin, a hormone which stimulates lactogenesis (the formation of milk in mammary glands), a process which requires large amounts of calcium.[24] Activity is also decreased by high levels of serum phosphate and by an increase in the production of the hormone FGF23 by osteocyte cells in bone.[25]

Calcitriol is also produced outside the kidney in small amounts by many other tissues including placenta and activated macrophages.[26]

When the drug alfacalcidol is used, 25-hydroxylation in the liver will produce calcitriol as the active metabolite. This will produce greater effects than other vitamin D precursors in patients with kidney disease who have loss of the renal 1-alpha-hydroxylase.[27]

Calcitriol's lifespan in the body is measured in hours, unlike its precursor calcifediol whose lifespan is measured in weeks.[28] Calcitriol is inactivated by further hydroxylation to form 1,24,25-trihydroxyvitamin D, calcitroic acid. This occurs through the action of the CYP24A1 24-hydroxylase.[29] Calcitroic acid is more soluble in water and is excreted in bile and urine.

It was first identified in 1971 by Michael F. Holick working in the laboratory of Hector DeLuca,[30][31] and also by Tony Norman and colleagues.[32]

Calcitriol usually refers specifically to 1,25-dihydroxycholecalciferol. Because cholecalciferol already has one hydroxyl group, only two (1,25) are further specified in this nomenclature, but there are three (1,3,25-triol), as indicated in when calcitriol is used. The 1-hydroxy group is in the alpha position, and this may be specified in the name, for instance in the abbreviation 1α,25-(OH)2D3.[6]

Calcitriol is, strictly, the 1-hydroxylation product of calcifediol (25-OH vitamin D3), derived from cholecalciferol (vitamin D3), rather than the product of hydroxylations of ergocalciferol (vitamin D2).[6] 1α,25-Dihydroxyergocalciferol (ercalcitriol) should be used for the vitamin D2 product.[6] However, the terminology of 1,25-dihydroxyvitamin D, or 1,25(OH)2D, is often used to refer to both types of active forms of vitamin D. Indeed, both bind to the vitamin D receptor and produce biological effects.[33] In clinical use, the differences are unlikely to have major importance.[27]