Psoriatic arthritis is a long-term inflammatory arthritis that occurs in people affected by psoriasis.[2] Various number of joints may be involved.[2] Symptoms often include swelling of entire fingers and toes resulting in a sausage-like appearance.[1] There may be changes to the nails such as small depressions (pitting), thickening, or detachment from the nailbed.[1] Skin changes of psoriasis (red, scaly, and itchy patches) occur in 85% before the onset of arthritis.[1]

The cause is related to a combination of genetic and environmental factors.[2] A third to a half have a relative with psoriasis.[2] Approximately 25% to 50% have the HLA-B27 genotype.[1] It is also associated with obesity and hypertension.[1] It is classified as a type of spondyloarthropathy.[2] Diagnosis is based on symptoms.[1]

Treatment of mild disease may be with NSAIDs while more severe disease may be treated with methotrexate or TNF inhibitors.[2] Other measures may include physiotherpy.[2] Significant disability can result.[2]

Psoriatic arthritis affects 0.3% to 1% of people (up to 30% of those with psoriasis).[1] This includes both children and adults.[1] Males and females are affected equally frequently.[1] It is less common in people of Asian or African descent.[1] It was first clearly described in 1973.[1] 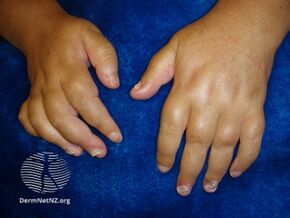 Swollen fingers due to psoriatic arthritis[3]

Pain, swelling, or stiffness in one or more joints is commonly present in psoriatic arthritis.[4] Psoriatic arthritis is inflammatory, and affected joints are generally red or warm to the touch.[4] Asymmetrical oligoarthritis, defined as inflammation affecting two to four joints during the first six months of disease, is present in 70% of cases. However, in 15% of cases, the arthritis is symmetrical. The joints of the hand that is involved in psoriasis are the proximal interphalangeal (PIP), the distal interphalangeal (DIP), the metacarpophalangeal (MCP), and the wrist. Involvement of the distal interphalangeal joints (DIP) is a characteristic feature and is present in 15% of cases.

In addition to affecting the joints of the hands and wrists, psoriatic arthritis may affect the fingers, nails, and skin. Sausage-like swelling in the fingers or toes, known as dactylitis, may occur.[4] Psoriasis can also cause changes to the nails, such as pitting or separation from the nail bed,[4] onycholysis, hyperkeratosis under the nails, and horizontal ridging.[5] Psoriasis classically presents with scaly skin lesions, which are most commonly seen over extensor surfaces such as the scalp, natal cleft and umbilicus.

In psoriatic arthritis, pain can occur in the area of the sacrum (the lower back, above the tailbone),[4] as a result of sacroiliitis or spondylitis, which is present in 40% of cases. Pain can occur in and around the feet and ankles, especially enthesitis in the Achilles tendon (inflammation of the Achilles tendon where it inserts into the bone) or plantar fasciitis in the sole of the foot.[4]

Along with the above-noted pain and inflammation, there is extreme exhaustion that does not go away with adequate rest. The exhaustion may last for days or weeks without abatement. Psoriatic arthritis may remain mild or may progress to more destructive joint disease. Periods of active disease, or flares, will typically alternate with periods of remission. In severe forms, psoriatic arthritis may progress to arthritis mutilans[6] which on X-ray gives a "pencil-in-cup" appearance.[1]

Because prolonged inflammation can lead to joint damage, early diagnosis and treatment to slow or prevent joint damage is recommended.[7]

The exact causes are not yet known, but a number of genetic associations have been identified in a genome-wide association study of psoriasis and psoriatic arthritis including HLA-B27.[8][9]

Factors that contribute to a diagnosis of psoriatic arthritis include the following:

Other symptoms that are more typical of psoriatic arthritis than other forms of arthritis include enthesitis (inflammation in the Achilles tendon (at the back of the heel) or the plantar fascia (bottom of the feet)), and dactylitis (sausage-like swelling of the fingers or toes).[10]

There are five main types of psoriatic arthritis:[1]

The underlying process in psoriatic arthritis is inflammation; therefore, treatments are directed at reducing and controlling inflammation. Milder cases of psoriatic arthritis may be treated with NSAIDs alone; however, there is a trend toward earlier use of disease-modifying antirheumatic drugs or biological response modifiers to prevent irreversible joint destruction.[citation needed]

Typically the medications first prescribed for psoriatic arthritis are nonsteroidal anti-inflammatory drugs (NSAIDs) such as ibuprofen and naproxen, followed by more potent NSAIDs like diclofenac, indomethacin, and etodolac. NSAIDs can irritate the stomach and intestine, and long-term use can lead to gastrointestinal bleeding.[11][12] Coxibs (COX-2 inhibitors) e.g. Celecoxib or Etoricoxib, are associated with a statistically significant 50 to 66% relative risk reduction in gastrointestinal ulcers and bleeding complications compared to traditional NSAIDs, but carry an increased rate of cardiovascular events such as myocardial infarction (MI) or heart attack, and stroke.[13][14] Both COX-2 inhibitors and other non-selective NSAIDS have potential adverse effects that include damage to the kidneys.

These are used in persistent symptomatic cases without exacerbation. Rather than just reducing pain and inflammation, this class of drugs helps limit the amount of joint damage that occurs in psoriatic arthritis. Most DMARDs act slowly and may take weeks or even months to take full effect. Drugs such as methotrexate or leflunomide are commonly prescribed; other DMARDS used to treat psoriatic arthritis include cyclosporin, azathioprine, and sulfasalazine.[15] According to a recent Cochrane review, low dose oral methotrexate was slightly more effective than placebos.[16] Immunosuppressant drugs can also reduce psoriasis skin symptoms but can lead to liver and kidney problems and an increased risk of serious infection.[citation needed]

The most recent class of treatment is called biological response modifiers or biologics has been developed using recombinant DNA technology. Biologic medications are derived from living cells cultured in a laboratory. Unlike traditional DMARDS that affect the entire immune system, biologics target specific parts of the immune system. They are given by injection or intravenous (IV) infusion.

Biologics prescribed for psoriatic arthritis are TNF-α inhibitors, including infliximab, etanercept, golimumab, certolizumab pegol and adalimumab, as well as the IL-12/IL-23 inhibitor ustekinumab.[1] Recently, the Jak inhibitor, tocifitinib (Xeljanz), was approved for the use in active psoriatic arthritis.[17]

Biologics may increase the risk of minor and serious infections.[18] More rarely, they may be associated with nervous system disorders, blood disorders or certain types of cancer.[citation needed]

A first-in-class treatment option for the management of psoriatic arthritis, apremilast is a small molecule phosphodiesterase-4 inhibitor approved for use by the FDA in 2014. By inhibiting PDE4, an enzyme which breaks down cyclic adenosine monophosphate, cAMP levels rise, resulting in the down-regulation of various pro-inflammatory factors including TNF-α, interleukin 17 and interleukin 23, as well as the up-regulation of anti-inflammatory factor interleukin 10.

It is given in tablet form and taken by mouth. Side effects include headaches, back pain, nausea, diarrhea, fatigue, nasopharyngitis and upper respiratory tract infections, as well as depression and weight loss.

Patented in 2014 and manufactured by Celgene, there is no current generic equivalent available on the market.

A review found tentative evidence of benefit of low level laser therapy and concluded that it could be considered for relief of pain and stiffness associated RA.[19]

Retinoid etretinate is effective for both arthritis and skin lesions. Photochemotherapy with methoxy psoralen and long-wave ultraviolet light (PUVA) are used for severe skin lesions. Doctors may use joint injections with corticosteroids in cases where one joint is severely affected. In psoriatic arthritis patients with severe joint damage orthopedic surgery may be implemented to correct joint destruction, usually with the use of a joint replacement. Surgery is effective for pain alleviation, correcting joint disfigurement, and reinforcing joint usefulness and strength.

Psoriatic arthritis can develop in people who have any level severity of psoriatic skin disease, ranging from mild to very severe.[21]

Psoriatic arthritis tends to appear about 10 years after the first signs of psoriasis.[1] For the majority of people, this is between the ages of 30 and 55, but the disease can also affect children. The onset of psoriatic arthritis symptoms before symptoms of skin psoriasis is more common in children than adults.[22]

More than 80% of patients with psoriatic arthritis will have psoriatic nail lesions characterized by nail pitting, separation of the nail from the underlying nail bed, ridging and cracking, or more extremely, loss of the nail itself (onycholysis).[22]

Enthesitis is observed in 30 to 50% of patients and most commonly involves the plantar fascia and Achilles’ tendon, but it may cause pain around the patella, iliac crest, epicondyles, and supraspinatus insertions[23]

Men and women are equally affected by this condition.[1] Like psoriasis, psoriatic arthritis is more common among Caucasians than African or Asian people.[1]