Hydroxocobalamin, also known as vitamin B12a and hydroxycobalamin, is a vitamin found in food and used as a dietary supplement.[3] As a supplement it is used to treat vitamin B12 deficiency including pernicious anemia.[3][4] Other uses include treatment for cyanide poisoning, Leber's optic atrophy, and toxic amblyopia.[5][6] It is given by injection into a muscle or vein.[4]

Side effects are generally few.[4] They may include diarrhea, low blood potassium, allergic reactions, and high blood pressure.[4] Normal doses are considered safe in pregnancy.[1] Hydroxocobalamin is the natural form of vitamin B12 and a member of the cobalamin family of compounds.[7][8] Hydroxocobalamin, or another form of vitamin B12, are required for the body to make DNA.[8]

Hydroxocobalamin was first isolated in 1949.[9] It is on the World Health Organization's List of Essential Medicines, the safest and most effective medicines needed in a health system.[10] Hydroxocobalamin is available as a generic medication.[4] The wholesale cost in the developing world is about US$0.12 to US$0.84 per dose (1 ml with 1 mg/ml concentration).[11] In the United States the same amount costs about US$0.84 wholesale.[12] Commercially it is made using one of a number of types of bacteria.[13]

Hydroxocobalamin at standard conditions is a solid composed of dark red crystals. 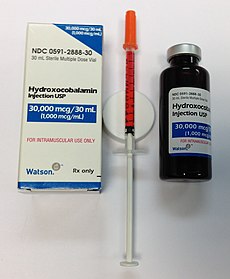 Standard therapy for treatment of vitamin B12 deficiency has been intramuscular (IM) or intravenous (IV) injections of hydroxocobalamin (OHCbl). It is used pediatric patients with intrinsic cobalamin metabolic diseases, vitamin B12-deficient patients with tobacco amblyopia due to cyanide poisoning, and patients with pernicious anemia who have optic neuropathy.[14]

In a newly diagnosed vitamin B12-deficient patient, normally defined as when serum levels are less than 200 pg/ml, daily IM injections of hydroxocobalamin up to 1,000 μg (1 mg) per day are given to replenish the body's depleted cobalamin stores. In the presence of neurological symptoms, following daily treatment, injections up to weekly or biweekly are indicated for six months before initiating monthly IM injections. Once clinical improvement is confirmed, maintenance supplementation of B12 will generally be needed for life.[citation needed]

Injection of hydroxocobalamin is used to rectify the following causes of vitamin B12 deficiency (list taken from the drug prescription label published by the U.S. Food and Drug Administration)

The defined daily dose is 20 mcg (via injection)[2]

The literature data on the acute toxicity profile of hydroxocobalamin show it is generally regarded as safe with local and systemic exposure. The ability of hydroxocobalamin to rapidly scavenge and detoxify cyanide by chelation has resulted in several acute animal and human studies using systemic hydroxocobalamin doses at suprapharmacological doses as high as 140 mg/kg to support its use as an intravenous (IV) treatment for cyanide exposure.[16][17] The US FDA at the end of 2006 approved the use hydroxocobalamin as an injection for the treatment of cyanide poisoning.

The drug causes a reddish discoloration of the urine (chromaturia), which can look like blood in the urine.[18]

Hydroxocobalamin acetate occurs as odorless, dark-red orthorhombic crystals. The injection formulations appear as clear, dark-red solutions. It has a distribution coefficient of 1.133 × 10-5 and a pKa of 7.65.

Vitamin B12 refers to a group of compounds called cobalamins that are available in the human body in a variety of mostly interconvertible forms. Together with folate, cobalamins are essential cofactors required for DNA synthesis in cells where chromosomal replication and division are occurring—most notably the bone marrow and myeloid cells. As a cofactor, cobalamins are essential for two cellular reactions:

Intracellular vitamin B12 is maintained in two active coenzymes, methylcobalamin and 5-deoxyadenosylcobalamin. In the face of vitamin B12 deficiency, conversion of methylmalonyl-CoA to succinyl-CoA cannot take place, which results in accumulation of methylmalonyl-CoA and aberrant fatty acid synthesis. In the other enzymatic reaction, methylcobalamin supports the methionine synthase reaction, which is essential for normal metabolism of folate. The folate-cobalamin interaction is pivotal for normal synthesis of purines and pyrimidines and the transfer of the methyl group to cobalamin is essential for the adequate supply of tetrahydrofolate, the substrate for metabolic steps that require folate. In a state of vitamin B12 deficiency, the cell responds by redirecting folate metabolic pathways to supply increasing amounts of methyltetrahydrofolate. The resulting elevated concentrations of homocysteine and MMA are often found in patients with low serum vitamin B12 and can usually be lowered with successful vitamin B12 replacement therapy. However, elevated MMA and homocysteine concentrations may persist in patients with cobalamin concentrations between 200 and 350 pg/mL.[21] Supplementation with vitamin B12 during conditions of deficiency restores the intracellular level of cobalamin and maintains a sufficient level of the two active coenzymes: methylcobalamin and deoxyadenosylcobalamin.