This is a report of activities of WPM:Wiki Project Med Foundation for 2018. It is not a complete list of everything we have done this year but represents a highlight of our work. The compiling of this report — like much that we do — has been a group effort, and we encourage involvement by further individuals within the wider membership.

We continue to see a lot of activity via this partnership. Jennifer Dawson has joined the board of Wiki Project Med Foundation and is also the Wikipedian in Residence at Cochrane (part-time). Activities include edit-a-thons and events, student training sessions, and encouraging Cochrane groups and centers to engage with Wikipedia by sharing evidence and through translation efforts.

Due to issues with Content Translation version 1.0 and 2.0, translation efforts have slowed. Enrique Cavalitto, now fully retired, is rejoining use to hopefully get things moving again.

The translation community from English to Chinese in Taiwan is still moving forward, now by the help of in 2018, the translation task is delegating by using google doc and Facebook Group. The total articles has reached to 500 articles translated into Chinese Wikipedia.[1] It is still in the second place of total translated edition of Wikipedia, the first is Odia Wikipedia (as always).

WHO has moved to a CC BY SA NC license unfortunately. They have tentatively agreed to possibly release some material specifically so that Internet-in-a-Box (IIAB) can use it.

NNLM ran an Wikipedia Edit-a-thon in the spring focusing on improving rare diseases (dashboard). Another is going to be run in the fall focusing on women's health.

Blog posts about our collaboration with NIOSH 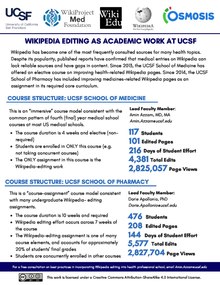 103 medical students and doctors have participated in the three day long events. 102 articles have been fully translated and corrected from the following list High importance medicine articles during these events and 48 articles are still in progress. We will continue this campaign in 2019 as well.

We have begun working with Rotary International. This has included giving talks at local meetings in Cranbrook BC and providing IIAB for a project in Myanmar.

The Data Science Institute at the University of Virginia appointed Lane Rasberry, bluerasberry, as Wikimedian in Residence in March 2018. In this role Rasberry is committed to continued collaboration with Wiki Project Med as he has done in his former role as Wikimedian in Residence at Consumer Reports from 2012-2018. His projects included coordinating the Cochrane Collaboration-Wikipedia Initiative/Article and citation matching research 2018, developing d:Wikidata:Scholia to better integrate Wikimedia projects with PubMed and other academic publications, and participation in Wiki Project Med initiatives including Medical School outreach and Internet-in-a-Box development.

Collaborations with Osmosis ended in 2018 following concerns raised by a number of Wikipedians. These concerns include 1) that Osmosis is a commercial entity, 2) that the videos do not have inline references 3) that they contain a couple second logo at the beginning 4) that they are not easily collaboratively editable. While some of the issues can be easily addressed changing Osmosis to an NGO and making the videos easy to edit are not.

For the third year running the Swedish Agency for Health Technology Assessment and Assessment of Social Services (SBU) has employed a Wikipedian in Residence (WIR) during the summer. The goals have been writing content on the Swedish and English Wikipedia, based upon high quality sources such as meta-analyses and systematic reviews — as well as running workshops and spread information about Wikipedia within SBU.

In November 2018 the Patient-Centered Outcomes Research Institute, a Washington D.C.-based nonprofit nongovernmental organization receiving some government funding, posted a call to hire a full-time Wikipedian in Residence for a one year term beginning in February 2019. In this role the Wikimedian in Residence will seek to integrate health information from PCORI into Wikipedia.

Zidovetz and bluerasberry of Wiki Project Med Foundation visited this organization in September 2018 to discuss collaboration.

We have been supporting the development of VideoWiki. The goal is to make video easy to edit collaboratively. This year the project moved to an open license and has migrated to Wikimedia Foundation servers.

WikiProject MED continues to engage with the WikiCite initiative in various ways. Medical publications form a significant portion of the WikiCite corpus and helped develop WikiCite workflows that are now increasingly used for other domains as well, WikiProject Zika Corpus continues to be used in WikiCite contexts for testing, demonstration and teaching purposes, which continually improves not just the coverage of the Zika-related literature but related information too. Work is also continuing on Scholia, which includes dedicated visualizations for diseases, genes and clinical trials, among many others that cater to non-medical or multiple disciplines.

The Wiki Project Med/App currently exists in ten languages with a larger and smaller version avaliable in English. Efforts are ongoing to develop offline apps in more languages. Growth of installs of the smaller EN version are strong. Installs of the large EN version have plateaued at about 60,000. Other version such as Fr have also plateaued. Though we continue to see growth in the use of the stand alone Arabic version.

This year we launched a version specifically geared towards South Asia which generated some press within India.[1] A version was created in collaboration with Stanford for a specific project in Uganda. Near the end of 2018 we moved to 128 Gb micro SD cards (allowed as a result of falling prices for the cards) and have begun duplicating the micro SD cards in house. We received a donation of 500 3D printed boxes from Tarek Loubani which will further help to keep costs down.

At Wikimania 2018 in South Africa we donated devices in support of a number of partners including:

We continue to generate stats around Wikipedia and medicine. This year the work has been mostly done by User:Edgars2007.

This includes the top editors to Wikipedia's medical content who were awarded barnstars to recognize their work.

WHO material translated into non-official WHO languages

Application to become a Thematic Organization

Elections to the Board