This is a report of activities of WPM:Wiki Project Med Foundation for 2017. It is not a complete list of everything we have done this year but represents a highlight of our work. The compiling of this report — like much that we do — has been a group effort, and we encourage involvement by further individuals within the wider membership.

Cochrane has hired a part time editor to help keep Cochrane reviews on Wikipedia up to date. We are seeing extensive and ongoing high quality edits coming from this collaboration. There is continued high level support within their organization to grow this collaboration. A community made bot is tagging Cochrane reviews that are out of date with the newer version that should replace it.

In partnership with Translators Without Borders

>1,000 English articles ready to be translated (represents more than one million words of text)

In 2017 we finished updating the lead of all 437 medication articles on the. The WHO released the list under an open license (CC SA 3.0 IGO) to make the collaboration possible. The list was also brought to featured list status on EN WP.

The (ILAE) has created a group to edit Wikipedia. They are collaborating with Shani Evenstein's class of medical students. They also presented at Wikimania.

285 videos created by Osmosis and within Wikipedia. Efforts are ongoing to translate the subtitles into other languages. Have worked with them to develop a video to help guide new student editors.[2]

We facilitated the release of ~220 ultrasound videos and images from Ultrasound of the Week under an open license.

App details have been moved to meta to facilitate translation and recognize the multilingual nature of the efforts.

Consensus for the use of small templates in the external links section to raise awareness on EN WP has been gained.[3] 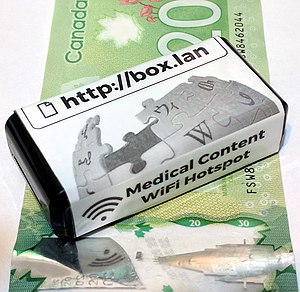 An example of Internet in a box

We have been collaborating with Internet-in-a-Box since Wikimania in Italy in 2016. We are supporting both its development and launch in a number of locations.

We have produced about 100 devices. Efforts are ongoing to raise awareness regarding their existence.

We are in discussion with MSF (Halim) with respect to collaborating on this. We are working on a version in the languages of South Asia.

Spoke out in opposition to the Turkey ban

The drafted statement was supported by more than 15,000 people.[4]

We have drafted an overview of our work for fundraising purposes.[5]

Recognition of all editors who made more than 250 edits to a medical article (regardless of the language they are working in) was distributed in April of 2017 for the 2016 editing year. Top editors listed here. The Cure Award has also been translated into 6 other languages.

Lucas has finished up working with us and has moved on to teaching high school students full time.

In 2017, we elected a new board of directors. The board later voted on changing the bylaws so that elections will run every 2 years, instead of yearly. This decision was made considering that we are an international organization and it takes time for new board members to get involved and have an impactful activity. It was decided that a 2-years term will serve the organization better, rather than having changes yearly.

We are actively working to recruit further legal support.

Taxes submitted to IRS for 2016 (income and expenses both zero)

Thank you letter for donations[7] sent out to a few folks.

We have signed up for