Logo for the Arabic version of our offline app

We have launched offline apps that contain all of Wikipedia's health care, medication, anatomy, and sanitation content. They are currently avaliable in several languages for Android and Windows 10 devices:

The Translation Task Force is a project began on English Wikipedia in collaboration with Translators Without Borders to improve key medical articles English followed by translation. A summary of the project is as follows:

Any organization which serves people who get information from the Internet has a stake in the quality of information on Wikipedia and related Wikimedia projects. For many demographics and for many topics, Wikipedia is the most consulted source of health information.

Health organizations who want to participate in Wikipedia projects to do health education outreach need the following:

Collaborations are currently being developed with the World Health Organization, Cancer Research UK, and the United States National Library of Medicine / National Institutes of Health. Efforts include issues surrounding copyright and the support of the creation of Wikipedians in Residence.

A number of presentations have been given globally regarding the significance of Wikipedia in Medicine including in Canada, the UK, India, Switzerland and Nepal.[1] A model presentation is available here under a CC BY SA license for others to use and adapt.[2] 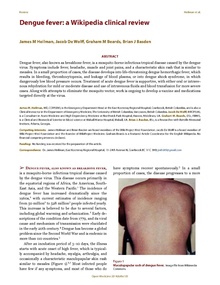 There is an existing Wikipedia outreach program which sends Wikipedia ambassadors - "campus ambassadors" - to schools to encourage students and professors to incorporate contributions to Wikipedia projects into the learning curricula. This organization facilitates participation in the campus ambassador program for those participating in health-related education projects at universities.

In some cases a health care provider may take a photograph or other media of a particular patient to create a learning tool for discussing a medical condition with visible symptoms. Wiki Medicine may either mediate or arranges mediation of queries about whether such content compromises patient personal identification and/or raises privacy concerns. One way that this group might do this is verify the existence of a consent to release a photograph with the photographing doctor. Wiki Medicine also provides, collects and shares guidelines for health professionals who have media to share, such as photos or x-rays. Wiki Medicine promotes patient rights and safety in media sharing.

This organization advocates for free access to educational health material. When a political action may serve to increase access to health information through the Internet and especially through Wikimedia projects, this organization may endorse those actions in any country. More commonly, this organization publishes talking points and arguments that other organizations may use in their own activist efforts when they discuss policy with their lawmakers.

Wiki Med sends requests to organizations with non-text media content and asks them to apply Wikimedia-compatible licensing to them so that they can be used to improve the quality of health content on Wikimedia projects.

We are supporting Spoken Wikipedia Team who are involved with creating spoken medical articles.

Spoken Wikipedia for Indian Languages is a Wikipedia Project undertaken by Wikipedia Club Pune to give a voice to the Indian community and to produce a knowledge domain of information related to India through audio recordings of the articles. Wikipedia seems to relatively lack articles on India, its culture, its people and about the little things that make them Indian. This project is a huge step forward in uplifting India to a global level through this platform, making it more noteworthy, better understood and effectively represented. Who better to undertake this task than the Indians themselves?

It is a fact that a majority of the Indian population belongs to the rural section of the country. What one must realize is that this chunk of the population is often ill-informed and spends a lifetime in relative ignorance about even the most basic of aspects. Every decision a citizen makes about oneself or others affects the nation as a whole at a smaller or larger scale. When the majority of people of a country belong to a section of the society that is less-privileged in terms of communicating or gaining knowledge, amongst other things; Spoken Wikipedia becomes almost a necessity.

How can we reach out to those who do not have an access to technology or the Internet? What about those who don't have basic education or don't comprehend the English language? With the development of this project, this audience shall have audio recorded articles in their mother tongues. They can reach out and hear these articles without the limitation of knowing a language that might have been a barrier earlier. Further, the people who can understand English but cannot read or write it would benefit from this project too. These are certain major advantages of Spoken Wikipedia, amongst others, the details of which can be found on the page-link provided previously.

Health is a primary concern in the agenda at present. It has become immensely important for the rural community especially, though not exclusively, to know and take the right decisions about its health. Evidently, a disease, however trivial it may seem, doesn't only affect the concerned person, but everyone around him/her as well. Epidemics can have a nationwide effect and recent occurrences of the spread of grave and severe contagious diseases should serve as an eye-opener for one and all. This issue shall be looked into and be given due importance in this project.

en:Ayurveda is a set of traditional medicinal practices from Indian subcontinet. These practices are recognized by a vast majority of people in India and used by people internationally.

The practices are described in some fundamental texts which are not freely available online. This project seeks to share verified versions of these texts through Wikisource and other projects.

Every year we collect data so that we can recognize top medical editors.