Delirium tremens (DTs) is a rapid onset of confusion usually caused by withdrawal from alcohol.[2] When it occurs, it is often three days into the withdrawal symptoms and lasts for two to three days.[2] Physical effects may include shaking, shivering, irregular heart rate, and sweating.[1] People may also see or hear things other people do not (hallucination).[2] Occasionally, a very high body temperature or seizures may result in death.[2] Alcohol is one of the most dangerous drugs from which to withdraw.[5]

Delirium tremens typically only occurs in people with a high intake of alcohol for more than a month.[6] A similar syndrome may occur with benzodiazepine and barbiturate withdrawal.[3] Withdrawal from stimulants such as cocaine does not have major medical complications.[7] In a person with delirium tremens it is important to rule out other associated problems such as electrolyte abnormalities, pancreatitis, and alcoholic hepatitis.[2]

Prevention is by treating withdrawal symptoms.[2] If delirium tremens occurs, aggressive treatment improves outcomes.[2] Treatment in a quiet intensive care unit with sufficient light is often recommended.[2] Benzodiazepines are the medication of choice with diazepam, lorazepam, chlordiazepoxide, and oxazepam all commonly used.[6] They should be given until a person is lightly sleeping.[2] The antipsychotic haloperidol may also be used.[2] The vitamin thiamine is recommended.[2] Mortality without treatment is between 15% and 40%.[4] Currently death occurs in about 1% to 4% of cases.[2]

About half of people with alcoholism will develop withdrawal symptoms upon reducing their use.[2] Of these, three to five percent develop DTs or have seizures.[2] The name delirium tremens was first used in 1813; however, the symptoms were well described since the 1700s.[6] The word "delirium" is Latin for "going off the furrow," a plowing metaphor.[4] It is also called shaking frenzy and Saunders-Sutton syndrome.[4] Nicknames include the shakes, barrel-fever, blue horrors, bottleache, bats, drunken horrors, elephants, gallon distemper, quart mania, and pink spiders, among others.[8]

The main symptoms of delirium tremens are nightmares, agitation, global confusion, disorientation, visual and[9] auditory hallucinations, tactile hallucinations, fever, high blood pressure, heavy sweating, and other signs of autonomic hyperactivity (fast heart rate and high blood pressure). These symptoms may appear suddenly, but typically develop two to three days after the stopping of heavy drinking, being worst on the fourth or fifth day.[10] Also, these "symptoms are characteristically worse at night".[11] In general, DT is considered the most severe manifestation of alcohol withdrawal and occurs 3–10 days following the last drink.[9] Other common symptoms include intense perceptual disturbance such as visions of insects, snakes, or rats. These may be hallucinations or illusions related to the environment, e.g., patterns on the wallpaper or in the peripheral vision that the patient falsely perceives as a resemblance to the morphology of an insect, and are also associated with tactile hallucinations such as sensations of something crawling on the subject—a phenomenon known as formication. Delirium tremens usually includes extremely intense feelings of "impending doom". Severe anxiety and feelings of imminent death are common DT symptoms.

DT can sometimes be associated with severe, uncontrollable tremors of the extremities and secondary symptoms such as anxiety, panic attacks and paranoia. Confusion is often noticeable to onlookers as those with DT will have trouble forming simple sentences or making basic logical calculations.

DT should be distinguished from alcoholic hallucinosis, the latter of which occurs in approximately 20% of hospitalized alcoholics and does not carry a significant mortality. In contrast, DT occurs in 5–10% of alcoholics and carries up to 15% mortality with treatment and up to 35% mortality without treatment.[12] DT is characterized by the presence of altered sensorium; that is, a complete hallucination without any recognition of the real world. DT has extreme autonomic hyperactivity (high pulse, blood pressure, and rate of breathing), and 35-60% of patients have a fever. Some patients experience seizures.[citation needed]

Delirium tremens is mainly caused by a long period of drinking being stopped abruptly. Withdrawal leads to a biochemical regulation cascade. It may also be triggered by head injury, infection, or illness in people with a history of heavy use of alcohol.[citation needed]

Another cause of delirium tremens is abrupt stopping of tranquilizer drugs of the barbiturate or benzodiazepine classes in a person with a relatively strong addiction to them.[citation needed] Because these tranquilizers' primary pharmacological and physiological effects stem from their manipulation of the GABA chemical and transmitter somatic system, the same neurotransmitter system affected by alcohol, delirium tremens can occur upon abrupt decrease of dosage in those who are heavily dependent. These DTs are much the same as those caused by alcohol and so is the attendant withdrawal syndrome of which they are a manifestation. That is the primary reason benzodiazepines are such an effective treatment for DTs, despite also being the cause of them in many cases. Because ethanol and tranquilizers such as barbiturates and benzodiazepines function as positive allosteric modulators at GABAA receptors, the brain, in its desire to equalize an unbalanced chemical system, triggers the abrupt stopping of the production of endogenous GABA. This decrease becomes more and more marked as the addiction becomes stronger and as higher doses are needed to cause intoxication. In addition to having sedative properties, GABA is an immensely important regulatory neurotransmitter that controls the heart rate, blood pressure, and seizure threshold among myriad other important autonomic nervous subsystems.[citation needed]

Delirium tremens is most common in people who have a history of alcohol withdrawal, especially in those who drink the equivalent of 7 to 8 US pints (3 to 4 l) of beer or 1 US pint (0.5 l) of distilled beverage daily. Delirium tremens also commonly affects those with a history of habitual alcohol use or alcoholism that has existed for more than 10 years.[13]

Delirium tremens is a component of alcohol withdrawal hypothesized to be the result of compensatory changes in response to chronic alcohol abuse. Alcohol positively allosterically modulates the binding of GABA, enhancing its effect and resulting in inhibition of neurons projecting into the nucleus accumbens, as well as inhibiting NMDA receptors. This combined with desensitization of alpha-2 adrenergic receptors, results in a homeostatic upregulation of these systems in chronic alcohol use. When alcohol use ceases, the unregulated mechanisms result in hyperexcitability of neurons as natural GABAergic systems are down-regulated and excitatory glutamatergic systems are unregulated. This combined with increased noradrenergic activity results in the symptoms of delirium tremens.[14]

Diagnosis is mainly based on symptoms. In a person with delirium tremens it is important to rule out other associated problems such as electrolyte abnormalities, pancreatitis, and alcoholic hepatitis.[2]

In some cases antipsychotics, such as haloperidol may also be used. Older drugs such as paraldehyde and clomethiazole were formerly the traditional treatment but have now largely been superseded by the benzodiazepines.

Acamprosate is occasionally used in addition to other treatments, and is then carried on into long-term use to reduce the risk of relapse. If status epilepticus occurs it is treated in the usual way.

It can also be helpful to provide a well lit room as people often have hallucinations.[16]

Alcoholic beverages can also be prescribed as a treatment for delirium tremens,[17] but this practice is not universally supported.[18]

High doses of thiamine often by the intravenous route is also recommended.[2] 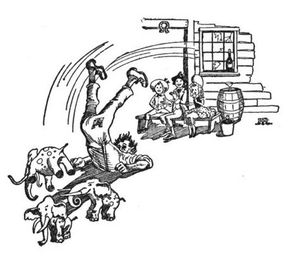 One of the characters in Joseph Conrad's novel Lord Jim experiences "DTs of the worst kind" with symptoms that include seeing millions of pink frogs.

In the 1995 film Leaving Las Vegas, Nicolas Cage plays a suicidal alcoholic who rids himself of all his possessions and travels to Las Vegas to drink himself to death. During his travels he experiences delirium tremens on a couch after waking up from a binge and crawls in pain to the refrigerator for more vodka. Cage's performance as Ben Sanderson in the film won the Academy Award for Best Actor in 1995.

In the 1945 film The Lost Weekend, Ray Milland won the Academy Award for Best Actor for his depiction of a character who experiences delirium tremens after being hospitalized, hallucinating that he saw a bat fly in and eat a mouse poking through a wall.[21][22][23]

English author George Eliot provides a case involving delirium tremens in her novel Middlemarch (1871-72). Alcoholic scoundrel John Raffles, both an abusive stepfather of Joshua Riggs and blackmailing nemesis of financier Nicholas Bulstrode, dies, whose "death was due to delirium tremens" while at Peter Featherstone’s Stone Court property. Housekeeper Mrs Abel provides Raffles’ final night of care per Bulstrode’s instruction whose directions given to Abel stand adverse to Dr Tertius Lydgate’s orders.
Pages 700-710, Chapters 69-70: "‘Remember, if he calls for liquors of any sort, not to give it to him.’" (Lydgate to Bulstrode). "...he gave directions to Bulstrode as to the doses, and the point at which they should cease. He insisted on the risk of not ceasing, and repeated his order that no alcohol should be given.’ (Bulstrode reflecting): "The thought was, that he had not told Mrs Abel when the dose of opium must cease. ... He walked up-stairs, candle in hand, not knowing whether he should straitaway enter his own room and go to bed, or turn to the patient’s room and rectify his omission. ... He turned to his own room. Before he had quite undressed, Mrs Abel rapped at his door ...‘If you please sir, should I have no brandy nor nothing to give the poor creetur? ...When I nursed my poor master, Mr Robisson, I had to give him port-wine and brandy constant, and a big glass at a time,’ added Mrs Abel with a touch of remonstrance in her tone. ...a key was thrust through the inch of doorway, and Mr Bulstrode said huskily, ‘That is the key of the wine-cooler. You will find plenty of brandy there.’"

American writer Mark Twain describes an episode of delirium tremens in his book The Adventures of Huckleberry Finn (1884). In Chapter 6, Huck states about his father, "After supper pap took the jug, and said he had enough whisky there for two drunks and one delirium tremens. That was always his word." Subsequently, Pap Finn runs around with hallucinations of snakes and chases Huck around their cabin with a knife in an attempt to kill him, thinking Huck is the "Angel of Death".

The Belgian beer, Delirium Tremens is named after delirium tremens and is also using a pink elephant as its logo to highlight one of the symptoms of delirium tremens.[25]