Disulfiram, sold under the trade name Antabuse among others, is a medications used treat alcoholism by producing an acute sensitivity to alcohol.[1] It should be used in conjunction with counseling and support.[1] It is less preferred than acamprosate and naltrexone.[2] People should be informed regarding how it works before it is given.[1] It is taken once a day by mouth.[1]

Common side effects include liver problems, rash, sleepiness, sexual dysfunction, headache, and taste changes.[1] Other side effects include nerve problems and confusion.[1] If people drink alcohol well taking the medication skin flushing, headache, shortness of breath, and vomiting may occur.[1] In severe cases heart failure, seizures, or death may occur.[3] Use is not recommended in early pregnancy or when breastfeeding.[2] It works by altering the breakdown of alcohol in the body.[1]

Disulfiram is used as a second line treatment, behind acamprosate and naltrexone, for alcohol dependence.[6]

Disulfiram should not be taken if alcohol has been consumed in the last 12 hours.[7] There is no tolerance to disulfiram: the longer it is taken, the stronger its effects.[3] As disulfiram is absorbed slowly through the digestive tract and eliminated slowly by the body, the effects may last for up to two weeks after the initial intake; consequently, medical ethics dictate that patients must be fully informed about the disulfiram-alcohol reaction.[8]

Disulfiram does not reduce alcohol cravings, so a major problem associated with this drug is extremely poor compliance. Methods to improve compliance include subdermal implants, which release the drug continuously over a period of up to 12 weeks, and supervised administration practices, for example, having the drug regularly administered by one's spouse.[medical citation needed] 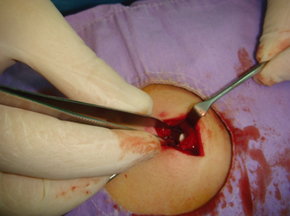 The most common side effects in the absence of alcohol are headache, and a metallic or garlic taste in the mouth, though more severe side effects may occur.[9] Tryptophol, a chemical compound that induces sleep in humans, is formed in the liver after disulfiram treatment.[10] Less common side effects include decrease in libido, liver problems, skin rash, and nerve inflammation.[11] Liver toxicity is an uncommon but potentially serious side effect, and risk groups e.g. those with already impaired liver function should be monitored closely. That said, the rate of disulfiram-induced hepatitis are estimated to be in between 1 per 25,000 to 1 in 30,000,[12] and rarely the primary cause for treatment cessation.

Cases of disulfiram neurotoxicity have also occurred, causing extrapyramidal and other symptoms.[13] Disulfiram (Antabuse) can produce neuropathy in daily doses of less than the usually recommended 500 mg. Nerve biopsies showed axonal degeneration and the neuropathy is difficult to distinguish from that associated with ethanol abuse. Disulfiram neuropathy occurs after a variable latent period (mean 5 to 6 months) and progresses steadily. Slow improvement may occur when the drug's use is stopped; often there is complete recovery eventually.[14]

Under normal metabolism, alcohol is broken down in the liver by the enzyme alcohol dehydrogenase to acetaldehyde, which is then converted by the enzyme acetaldehyde dehydrogenase to a harmless acetic acid derivative (acetyl coenzyme A). Disulfiram blocks this reaction at the intermediate stage by blocking acetaldehyde dehydrogenase. After alcohol intake under the influence of disulfiram, the concentration of acetaldehyde in the blood may be five to 10 times higher than that found during metabolism of the same amount of alcohol alone. As acetaldehyde is one of the major causes of the symptoms of a "hangover", this produces immediate and severe negative reaction to alcohol intake. About 5 to 10 minutes after alcohol intake, the patient may experience the effects of a severe hangover for a period of 30 minutes up to several hours. Symptoms include flushing of the skin, accelerated heart rate, shortness of breath, nausea, vomiting, throbbing headache, visual disturbance, mental confusion, postural syncope, and circulatory collapse.

Disulfiram disrupts metabolism of several other compounds, including paracetamol (acetaminophen),[15] theophylline[16] and caffeine.[17] However, in most cases, this disruption is mild and presents itself as a 20–40% increase in the half-life of the compound at typical dosages of disulfiram.

The synthesis of disulfiram, originally known as tetraethylthiuram disulfide, was first reported in 1881. By around 1900, it was introduced to the industrial process of Sulfur vulcanization of rubber and became widely used. In 1937 a rubber factory doctor in the US published a paper noting that workers exposed to disulfiram had negative reactions to alcohol and could be used as a drug for alcoholism; the effects were also noticed in workers at Swedish rubber boot factory.[19]

In the early 1940s it had been tested as a treatment for scabies, a parasitic skin infection, as well as intestinal worms.[19]

Around that time, during the German occupation of Denmark, Erik Jacobsen and Jens Hald at the Danish drug company Medicinalco picked up on that research and began exploring the use of disulfiram to treat intestinal parasites. The company had a group of enthusiastic self-experimenters that called itself the "Death Battalion", and in the course of testing the drug on themselves, accidentally discovered that drinking alcohol while the drug was still in their bodies made them mildly sick.[19][20]: 98–105

They made that discovery in 1945, and did nothing with it until two years later, when Jacobsen gave an impromptu talk and mentioned this self-experimental work and Disulframs nausea inducing effects when combined with alcohol, this talk which was discussed afterwards in newspapers at the time, lead them to further explore the use of the drug for aversive-reaction based therapy for the treatment of alcohol abuse.[19][20]: 98–105  That work included small clinical trials with Oluf Martensen-Larsen, a doctor who worked with alcoholics.[19] They published their work starting in 1948.[19][21]

The chemists at Medicinalco discovered a new form of disulfiram while trying to purify a batch that had been contaminated with copper. This form turned out to have better pharmacological properties, and the company patented it and used that form for the product that was introduced as Antabus (later anglicized to Antabuse).[19]

The drug was first marketed in Denmark and as of 2008 Denmark was the country where it was most widely prescribed. It was approved by the FDA in 1951.[19][22]

In medicine, the term "disulfiram effect" refers to an adverse effect of a particular medication in causing an unpleasant hypersensitivity to alcohol, similar to the effect caused by disulfiram administration.

Disulfiram has been studied as a possible treatment for cancer[23] and latent HIV infection.[24]

When disulfiram creates complexes with metals (dithiocarbamate complexes), it is a proteasome inhibitor and as of 2016 it had been studied in in vitro experiments, model animals, and small clinical trials as a possible treatment for liver metastasis, metastatic melanoma, glioblastoma, non-small cell lung cancer, and prostate cancer.[23][25] Various clinical trials of copper depletion agents have been carried out.

Disulfiram has also been identified by systematic high-throughput screening as a potential HIV latency reversing agent (LRA).[26][27] Reactivation of latent HIV infection in patients is part of an investigational strategy known as "shock and kill" which may be able to reduce or eliminate the HIV reservoir.[24] Recent phase II dose-escalation studies in patients with HIV who are controlled on antiretroviral therapy have observed an increase in cell-associated unspliced HIV RNA with increasing exposure to disulfiram and its metabolites.[26][28] Disulfiram is also being investigated in combination with vorinostat, another investigational latency reversing agent, to treat HIV.[29]