Rabeprazole, sold under the brand name Pariet among others, is a medication that decreases stomach acid.[7] It is used to treat peptic ulcer disease, gastroesophageal reflux disease, and excess stomach acid production such as in Zollinger–Ellison syndrome.[7] It may also be used in combination with other medications to treat Helicobacter pylori.[8] Effectiveness is similar to other proton pump inhibitors (PPIs).[9] It is taken by mouth.[7]

Common side effects include constipation, feeling weak, and throat inflammation.[7] Serious side effects may include osteoporosis, low blood magnesium, Clostridium difficile infection, and pneumonia.[7] Use in pregnancy and breastfeeding is of unclear safety.[2] It works by blocking H+/K+-ATPase in the parietal cells of the stomach.[7]

Rabeprazole, like other proton pump inhibitors such as omeprazole, is used for the purposes of gastric acid suppression.[14] This effect is beneficial for the treatment and prevention of conditions in which gastric acid directly worsens symptoms, such as duodenal and gastric ulcers.[14] In the setting of gastroesophageal reflux disease (GERD), whose pathophysiology is characterized by prolonged exposure to gastric acid in the esophagus (often due to changes in stomach and/or esophagus anatomy, such as those induced by abdominal obesity),[15] acid suppression can provide symptomatic relief.[14] Acid suppression is also useful when gastric production of acid is increased, including conditions with excess gastric acid secretion (hypersecretory conditions) like Zollinger-Ellison syndrome, multiple endocrine adenomas, and systemic mastocytosis.[14]

Rabeprazole is also useful alongside antibiotic therapy for the treatment of the pathogen Helicobacter pylori, which otherwise thrives in acidic environments.[14] Notably, H. pylori eradication with antibiotics and rabeprazole was also shown to prevent development of second gastric cancer in a randomized trial in high-risk South Korean patients with early stomach cancer treated by endoscopy.[16]

Advanced age does not appear to impact rabeprazole's metabolism.[4] However, elevations in the maximum plasma concentration and the total drug exposure (area under the curve, AUC) have occurred.[14]

In people that have kidney or liver problems, these problems do not appear to affect rabeprazole's metabolism in a meaningful way. This includes individuals on dialysis for kidney problems. Severe liver problems like cirrhosis of the liver do affect rabeprazole's elimination half-life, but not to a degree of dangerous accumulation.[4] In a review of patients taking rabeprazole while having end-stage kidney disease and mild-to-moderate severity, chronic compensated cirrhosis of the liver, the alteration in rabeprazole's metabolism was not clinically meaningful.[1]

Rabeprazole is contraindicated in the following populations and situations:[7]

Rilpivirine, a non-nucleoside reverse transcriptase inhibitor used in the treatment of HIV, is contraindicated with all PPIs because of their acid-suppressing effect. PPIs suppress acid, thereby raising the pH of (alkalizing) the stomach's contents. Rilpivirine is best absorbed under acidic conditions. Therefore, rabeprazole would be expected to decrease the absorption of rilpivirine, decrease the concentration of rilpivirine in the blood, and possibly lead to therapeutic failure and resistance to the medication/class.[18]

In general, rabeprazole is fairly well tolerated, even up to five years after clinical trial follow-up.[1] The side effect profile is similar to that of omeprazole.[4] The most common side effects include headache, nausea, and diarrhea.[1] Rare side effects include rashes, flu-like symptoms, and infections (including by the gastrointestinal pathogen Clostridium difficile[19]).[4] Rare instances of rabeprazole-induced liver injury (also known as hepatotoxicity) have been reported. Characteristic proton-pump inhibitor hepatoxicity usually occurs within the first four weeks of starting the medication.[20]

Acid suppression via rabeprazole can decrease the absorption of vitamin B12 and magnesium, leading to deficiency.[7]

Very serious side effects have been reported in people taking rabeprazole, but these effects have not been "correlated directly" with the use of rabeprazole.[14] These include Stevens–Johnson syndrome, serious hematological abnormalities, coma, and death.[14] Other possible side effects, common to other PPIs medications in the same class, include bone fractures due to osteoporosis and serious infections with Clostridium difficile.[7]

Studies using animals models to investigate the likelihood for rabeprazole to cause harm to fetuses have not yet shown evidence of harm, though avoidance of rabeprazole during pregnancy (especially during the critical development period of the first trimester) is considered to be the safest possible route until human studies clarify the exact risk.[14]

It is expected that rabeprazole will be secreted into human breast milk, though the clinical impact of this is still unknown. Avoiding rabeprazole during breastfeeding confers to lowest possible risk.[14]

No signs and symptoms have been reported in overdoses of rabeprazole up to 80 mg, but case examples are limited.[22] Notably, rabeprazole has been used in higher doses for the treatment of hypersecretory conditions like Zollinger-Ellison syndrome (up to 120 mg daily).[22]

Animal experiments with ultra-high doses of rabeprazole have demonstrated lethality through unknown mechanisms. The lethal overdose syndrome in animals is characterized by convulsion and coma.[23]

Rabeprazole does not interfere with the plasma concentration of drugs that are also metabolized by the same enzymes (i.e. CYP2C19) that it is metabolized by. Therefore, it is not expected to react with CYP2C19 substrates like theophylline, warfarin, diazepam, and phenytoin.[4] However, the acid-suppression effects of rabeprazole, like other PPIs, may interfere with the absorption of drugs that require acid, such as ketoconazole and digoxin.[14]

Clinically serious drug-drug interactions may involve the acid-suppression effects of rabeprazole. For example, rabeprazole should not be used concomitantly with rilpivirine, an anti-HIV therapy, which requires acid for absorption. Lowered plasma concentrations of rilpivirine could lead to progression of HIV infection. Other drugs that require acid for absorption include antifungal drugs like ketoconazole and itraconazole, digoxin, iron, mycophenolate, and tyrosine kinase inhibitors like erlotinib, dasatinib, and nilotinib.[7] There is no clinically relevant drug interaction between rabeprazole and antacids.[1][23]

Food does not affect the amount of rabeprazole that enters the body,[1] but it does delay its onset of effect by about 1.7 hours.[4]

Rabeprazole's mechanism of action first involves getting absorbed into the parietal cells of the stomach, which are the cells that are responsible for secreting hydrochloric acid (HCl).[14] At this point, rabeprazole is inactive.[14] However, rabeprazole is then secreted into the secretory canaliculus of the parietal cells, which is the space from which acid secretion occurs.[14] Here, acid secretion is mediated by the energy-dependent acid pumps, called hydrogen potassium adenosine triphosphatase (H+/K+ ATPase) pumps.[14] These enzymatic pumps have cysteine amino acid residues.[14] After being activated by gastric (stomach) acid to a reactive sulfenamide intermediate,[24] rabeprazole permanently binds the cysteine residues, forming covalent, disulfide bonds.[14] This action fundamentally alters the configuration of the acid pump, thereby inhibiting its activity. Thus, acid can no longer be secreted into the gastric lumen (the empty space of the stomach), and the pH of the stomach increases (decrease in the concentration of hydrogen ions, H+).[14] Due to the permanent inhibition of the individual proton pump that each molecule of rabeprazole has bound to, acid secretion is effectively suppressed until new proton pumps are produced by the parietal cells.[20]

Rabeprazole, like other medications in the same class, cannot inhibit the H+/K+ ATPase pumps found in lysosomes, a cellular organelle that degrades biological molecules, because the pumps found in these organelles lack the cysteine residues involved in rabeprazole's mechanism of action.[1]

A unique feature of rabeprazole's mechanism of action in inhibiting acid secretion involves its activation. The pKa (the pH at which 50% of the drug becomes positively charged) of rabeprazole is around 5.0, meaning that it doesn't take a lot of acid to activate it. While this theoretically translates into a faster onset of action for rabeprazole's acid-inhibiting effect, the clinical implications of this fact have yet to be elucidated.[14] 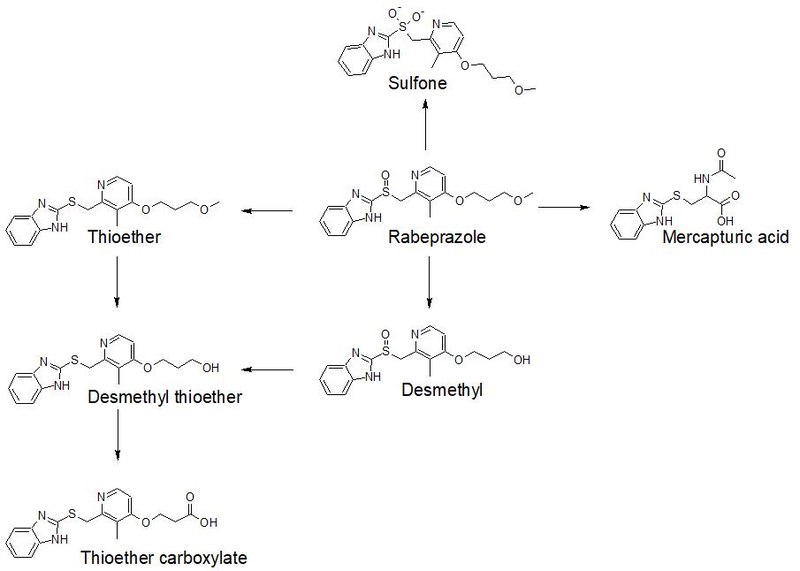 Phase I metabolism of rabeprazole,[23] drawn in ChemSketch.

The effect of rabeprazole may vary based upon the genetics of the individual taking the medication. People may have differences in their capacity to metabolize rabeprazole to an inactive metabolite. This may be mediated through genetic differences in the gene that encodes for the metabolic enzyme CYP2C19. For example, people that are poor CYP2C19 metabolizers (i.e. their version of CYP2C19 is less effective than average) will have trouble metabolizing rabeprazole, allowing the active rabeprazole to stay in the body, where it can exert its effect, longer than intended. Conversely, extensive CYP2C19 metabolizers (i.e. the average metabolic capacity of CYP2C19) will extensively metabolize rabeprazole, as expected. The poor metabolizing CYP2C19 phenotype is found in roughly 3–5% of Caucasian people, and in 17–20% of people of Asian ancestry.[25] In a study on men of Japanese ancestry, this has translated to an average increase of total drug exposure by 50–60% compared to men in the United States.[23] In a study on rabeprazole's pharmacokinetics, the AUC was elevated by approximately 50–60% in men of Japanese ancestry compared to men in the United States.[23]

However, rabeprazole's metabolism is primarily non-enzymatic (it is often inactivated chemically, without the participation of the body's natural drug metabolizing enzymes). Therefore, while a person's CYP2C19 phenotype will affect rabeprazole's metabolism, it is not expected to dramatically affect the efficacy of the medication.[1]

3D representation of rabeprazole spinning along an axis.

Rabeprazole is classified as a substituted benzimidazole, like omeprazole, lansoprazole, and pantoprazole.[24] Rabeprazole possess properties of both acids and bases, making it an amphotere.[24] The acid dissociation constant (pKa) of the pyridine nitrogen is about equal to 5.[24]

The above synthesis pathway begins with 2,3-dimethypyridine N-oxide (1). Nitration of 2,3-dimethylpyridine N-oxide affords the nitro derivative (the addition of NO2) (2) The newly introduced nitro group is then displaced by the alkoxide from 3-methoxypropanol to yield the corresponding ether (3). Treatment with acetic anhydride results in the Polonovski reaction. Saponification followed by treatment with thionyl chloride then chlorinates the primary alcohol (5). Reaction with benzimidazole-2-thiol (6) followed by oxidation of the resulting thioether to the sulfoxide yields the final product: rabeprazole (8).[26][27]

Rabeprazole was first marketed in Europe in 1998.[1] In 1999, one year later, rabeprazole was approved for use in the United States.[19]

Developed by Eisai Medical Research by the research names E3810 and LY307640, the pre-investigational new drug application was submitted on October 28, 1998. The final investigational new drug application was submitted August 6, 1999. On August 19, 1999, rabeprazole was approved in the US for multiple gastrointestinal indications. The approval for the treatment of symptomatic gastroesophageal reflux disease was on February 12, 2002.[28]

Rabeprazole has been sold in a number of brand names:[33]

An alternative formulation of rabeprazole, termed "rabeprazole-ER" (extended release) has been developed. The purpose of the formulation was to increase the half-life of rabeprazole, which normally is very short in humans. Rabeprazole-ER was a 50 mg capsule composed of five non-identical 10 mg tablets that were designed to release rabeprazole at differing intervals throughout the gastrointestinal system. However, because two high quality clinical trials failed to demonstrate a benefit of rabeprazole-ER versus esomeprazole (another common PPI) for healing grade C or D erosive esophagitis, the development of rabeprazole-ER ceased.[34]