Superior mesenteric artery (SMA) syndrome is a digestive condition that occurs when the first part of the small intestine (duodenum) is compressed between two arteries (the aorta and the superior mesenteric artery).[2] Symptoms may include abdominal pain, rapid fullness when eating, nausea, vomiting, and weight loss.[2] Complications may include small bowel obstruction, electrolyte abnormalities, and pneumatosis intestinalis.[2]

Causes may include significant weight loss or following surgery for scoliosis.[2] Cases may run in families.[2] The underlying mechanism often involves the loss of the fatty tissue that surrounds the superior mesenteric artery.[2] Diagnosis is generally based on symptoms and medical imaging after other potential causes are excluded.[2] Nutcracker syndrome is a different condition in which the left renal vein is compressed by an artery.[3]

Treatment may involve gaining weight, sitting with the knees to the chest after eating, or surgery.[2] Small and frequent meals may be helpful.[2] Tube feeding or intravenous nutritional support may be required in severe cases.[2] Metoclopramide may be used to help with nausea.[2] Surgery is generally only considered if other measures are not effected.[2] SMA is estimated to affect about 2 per 1,000 people.[1] It was first described in 1861 by Carl von Rokitansky.[4]

Signs and symptoms include early satiety, nausea, vomiting, extreme "stabbing" postprandial abdominal pain (due to both the duodenal compression and the compensatory reversed peristalsis), abdominal distention/distortion, burping, external hypersensitivity or tenderness of the abdominal area, reflux, and heartburn.[5] In infants, feeding difficulties and poor weight gain are also frequent symptoms.[6]

In some cases of SMA syndrome, severe malnutrition accompanying spontaneous wasting may occur.[7] This, in turn, increases the duodenal compression, which worsens the underlying cause, creating a cycle of worsening symptoms.[8]

Fear of eating is a commonly seen among those with the chronic form of SMA syndrome. For many, symptoms are partially relieved when in the left lateral decubitus or knee-to-chest position, or in the prone (face down) position. A Hayes maneuver, which corresponds to applying pressure below the umbilicus in cephalad and dorsal direction, elevates the root of the SMA, also slightly easing the constriction. Symptoms can be aggravated when leaning to the right or taking a face up position.[7]

Retroperitoneal fat and lymphatic tissue normally serve as a cushion for the duodenum, protecting it from compression by the SMA. SMA syndrome is thus triggered by any condition involving an insubstantial cushion and narrow mesenteric angle. SMA syndrome can present in two forms: chronic/congenital or acute/induced.

Patients with the chronic, congenital form of SMA syndrome predominantly have a lengthy or even lifelong history of abdominal complaints with intermittent exacerbations depending on the degree of duodenal compression. Risk factors include anatomic characteristics such as: aesthenic (very thin or "lanky") body build, an unusually high insertion of the duodenum at the ligament of Treitz, a particularly low origin of the SMA, or intestinal malrotation around an axis formed by the SMA.[9] Predisposition is easily aggravated by any of the following: poor motility of the digestive tract,[10] retroperitional tumors, loss of appetite, malabsorption, cachexia, exaggerated lumbar lordosis, visceroptosis, abdominal wall laxity, peritoneal adhesions, abdominal trauma,[11] rapid linear adolescent growth spurt, weight loss, starvation, catabolic states (as with cancer and burns), and history of neurological injury.[12]

It is important to note, however, that while SMA syndrome can mimic an eating disorder, distinguishing the two conditions is extremely important, as misdiagnosis in this situation can be dangerous.

Diagnosis is can be difficult, and usually one of exclusion. SMA syndrome is generally considered only after people have undergone an extensive evaluation of their gastrointestinal tract including upper endoscopy, and evaluation for various malabsorptive, ulcerative and inflammatory instestinal conditions with a higher diagnostic frequency. Diagnosis may follow X-ray examination revealing duodenal dilation followed by abrupt constriction proximal to the overlying SMA, as well as a delay in transit of four to six hours through the gastroduodenal region. Standard diagnostic exams include abdominal and pelvic computed tomography (CT) scan with oral and IV contrast, upper gastrointestinal series (UGI), and, for equivocal cases, hypotonic duodenography. In addition, vascular imaging studies such as ultrasound and contrast angiography may be used to indicate increased bloodflow velocity through the SMA or a narrowed SMA angle.[13][14]

It is typically caused by an angle of 6°–25° between the AA and the SMA, in comparison to the normal range of 38°–56°, due to a lack of retroperitoneal and visceral fat (mesenteric fat). In addition, the aortomesenteric distance is 2–8 millimeters, as opposed to the typical 10–20.[15] However, a narrow SMA angle alone is not enough to make a diagnosis, because people can have a narrow SMA angle with no symptoms of SMA syndrome.[16]

Despite multiple case reports, there has been controversy surrounding the diagnosis and even the existence of SMA syndrome since symptoms do not always correlate well with radiologic findings, and may not always improve following surgical correction.[17] However, the reason for the persistence of gastrointestinal symptoms even after surgical correction in some cases has been traced to the remaining prominence of reversed peristalsis in contrast to direct peristalsis.[18]

Since females between the ages of 10 and 30 are most frequently afflicted, it is not uncommon for physicians to initially and incorrectly assume that emaciation is a choice of the patient instead of a consequence of SMA syndrome. Patients in the earlier stages of SMA syndrome often remain unaware that they are ill until substantial damage to their health is done, since they may attempt to adapt to the condition by gradually decreasing their food intake or naturally gravitating toward a lighter and more digestible diet. 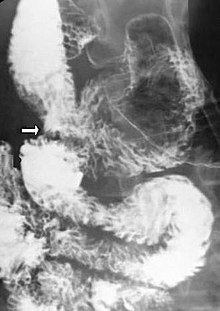 SMA syndrome can present in acute, acquired form (e.g. abruptly emerging within an inpatient stay following scoliosis surgery) as well as chronic form (i.e. developing throughout the course of a lifetime and advancing due to environmental triggers, life changes, or other illnesses). According to a number of recent sources, at least 70% of cases can typically be treated with medical treatment, while the rest require surgical treatment.[5][12][20]

Medical treatment is attempted first in many cases. In some cases, emergency surgery is necessary upon presentation.[12] A six-week trial of medical treatment is recommended in pediatric cases.[5] The goal of medical treatment for SMA syndrome is resolution of underlying conditions and weight gain. Medical treatment may involve nasogastric tube placement for duodenal and gastric decompression, mobilization into the prone or left lateral decubitus position,[21] the reversal or removal of the precipitating factor with proper nutrition and replacement of fluid and electrolytes, either by surgically inserted jejunal feeding tube, nasogastric intubation, or peripherally inserted central catheter (PICC line) administering total parenteral nutrition (TPN). Pro-motility agents such as metoclopramide may also be beneficial.[22] Symptoms may improve after restoration of weight, except when reversed peristalsis persists, or if regained fat refuses to accumulate within the mesenteric angle.[18] Most patients seem to benefit from nutritional support with hyperalimentation irrespective of disease history.[23]

The possible persistence of symptoms after surgical bypass can be traced to the remaining prominence of reversed peristalsis in contrast to direct peristalsis, although the precipitating factor (the duodenal compression) has been bypassed or relieved. Reversed peristalsis has been shown to respond to duodenal circular drainage—a complex and invasive open surgical procedure originally implemented and performed in China.[18]

In some cases, SMA syndrome may occur alongside a serious, life-threatening condition such as cancer or AIDS. Even in these cases, though, treatment of the SMA syndrome can lead to a reduction in symptoms and an increased quality of life.[26][27]

A 1-in-3 mortality rate for Superior Mesenteric Artery syndrome has been quoted by a small number of sources.[29] However, after extensive research, original data establishing this mortality rate has not been found, indicating that the number is likely to be unreliable. While research establishing an official mortality rate may not exist, two recent studies of SMA syndrome patients, one published in 2006 looking at 22 cases[12] and one in 2012 looking at 80 cases,[20] show mortality rates of 0%[12] and 6.3%,[20] respectively. According to the doctors in one of these studies, the expected outcome for SMA syndrome treatment is generally considered to be excellent.[12]

According to a 1956 study, 0.3% of people referred for an upper-gastrointestinal-tract barium studies fit this diagnosis, and is thus a rare disease.[30] Recognition of SMA syndrome as a distinct clinical entity is controversial, due in part to its possible confusion with a number of other conditions,[31] though it is now widely acknowledged.[15] However, unfamiliarity with this condition in the medical community coupled with its intermittent and nonspecific symptomatology probably results in its underdiagnosis.[32]

As the syndrome involves a lack of essential fat, more than half of those diagnosed are underweight, sometimes to the point of sickliness and emaciation. Females are impacted more often than males, and while the syndrome can occur at any age, it is most frequently diagnosed in early adulthood. The most common co-morbid conditions include mental and behavioral disorders including eating disorders and depression, infectious diseases including tuberculosis and acute gastroenteritis, and nervous system diseases including muscular dystrophy, Parkinson's disease, and cerebral palsy.[20]

SMA syndrome was first described in 1861 by Carl Freiherr von Rokitansky in victims at autopsy, but remained pathologically undefined until 1927 when Wilkie published the first comprehensive series of 75 patients.[33]

American actor, director, producer, and writer Christopher Reeve had the acute form of SMA syndrome as a result of spinal cord injury.

In 2017 a US non-profit began distributing grants to those with SMAS. They are registered to the IRS under the name Superior Mesenteric Artery Syndrome Research, Awareness and Support, but also work under the DBA of SMAS Patient Assistance. It is their goal to assist the uninsured and under-insured in the U.S. receive the medical help they need to treat their SMAS.[34]