Thoracic outlet syndrome (TOS) is a condition in which there is compression of the nerves, arteries, or veins in the passageway from the lower neck to the armpit.[1] There are three main types: neurogenic, venous, and arterial.[1] The neurogenic type is the most common and presents with pain, weakness, and occasionally loss of muscle at the base of the thumb.[1][2] The venous type results in swelling, pain, and possibly a bluish coloration of the arm.[2] The arterial type results in pain, coldness, and paleness of the arm.[2]

TOS may result from trauma, repetitive arm movements, tumors, pregnancy, or anatomical variations such as a cervical rib.[1] The diagnosis may be supported by nerve conduction studies and medical imaging.[1] Other conditions that can produce similar symptoms include rotator cuff tear, cervical disc disorders, fibromyalgia, multiple sclerosis, and complex regional pain syndrome.[1]

Initial treatment for the neurogenic type is with exercises to strengthen the chest muscles and improve posture.[1] NSAIDs such as naproxen may be used for pain.[1] Surgery is typically done for the arterial and venous types and for the neurogenic type if it does not improve with other treatments.[1][2] Blood thinners may be used to treat or prevent blood clots.[1] The condition affects about 1% of the population.[3] It is more common in women than men and it occurs most commonly between 20 and 50 years of age.[1] The condition was first described in 1818 and the current term "thoracic outlet syndrome" first used in 1956.[2][4]

TOS affects mainly the upper limbs, with signs and symptoms manifesting in the shoulders, neck, arms and hands. Pain can be present on an intermittent or permanent basis. It can be sharp/stabbing, burning, or aching. TOS can involve only part of the hand (as in the pinky and adjacent half of the ring finger), all of the hand, or the inner aspect of the forearm and upper arm. Pain can also be in the side of the neck, the pectoral area below the clavicle, the armpit/axillary area, and the upper back (i.e., the trapezius and rhomboid area). Discoloration of the hands, one hand colder than the other hand, weakness of the hand and arm muscles, and tingling are commonly present.[citation needed]

A painful, swollen and blue arm, particularly when occurring after strenuous physical activity, could be the first sign of a subclavian vein compression related with an unknown TOS and complicated by thrombosis (blood clots), the so-called Paget–Schroetter syndrome or effort-induced thrombosis.

TOS can be related to cerebrovascular arterial insufficiency when affecting the subclavian artery.[5] It also can affect the vertebral artery, in which case it could produce vision disturbances, including transient blindness,[6] and embolic cerebral infarction.[7]

TOS can also lead to eye problems and vision loss as a circumstance of vertebral artery compression. Although very rare, if compression of the brain stem is also involved in an individual presentation of TOS, transient blindness may occur while the head is held in certain positions.[8] If left untreated, TOS can lead to neurological deficits as a result of the hypoperfusion and hypometabolism of certain areas of the brain and cerebellum.[9] 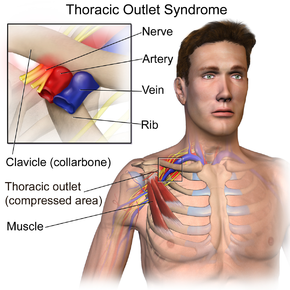 TOS can be attributed to one or more of the following factors:[10]

Adson's sign and the costoclavicular maneuver lack specificity and sensitivity and should comprise only a small part of the mandatory comprehensive history and physical examination undertaken with a patient suspected of having TOS. There is currently no single clinical sign that makes the diagnosis of TOS with any degree of certainty.

Additional maneuvers that may be abnormal in TOS include Wright's Test, which involves hyperabducting the arms over the head with some extension and evaluating for loss of radial pulses or signs of blanching of the skin in the hands indicating a decrease in blood flow with the maneuver. The "compression test" is also used, exerting pressure between the clavicle and medial humeral head causes radiation of pain and/or numbness into the affected arm.[11]

Doppler arteriography, with probes at the fingertips and arms, tests the force and "smoothness" of the blood flow through the radial arteries, with and without having the patient perform various arm maneuvers (which causes compression of the subclavian artery at the thoracic outlet). The movements can elicit symptoms of pain and numbness and produce graphs with diminished arterial blood flow to the fingertips, providing strong evidence of impingement of the subclavian artery at the thoracic outlet.[12] Doppler arteriography does not utilize probes at the fingertips and arms, and in this case is likely being confused with plethysmography, which is a different method that utilizes ultrasound without direct visualization of the affected vessels. Doppler ultrasound (not really 'arteriography') would not be used at the radial artery in order to make the diagnosis of TOS. Finally, even if a Doppler study of the appropriate artery were to be positive, it would not diagnose neurogenic TOS, by far the most common subtype of TOS. There is plenty of evidence in the medical literature to show that arterial compression does not equate to brachial plexus compression, although they may occur together, in varying degrees. Additionally, arterial compression by itself does not make the diagnosis of arterial TOS (the rarest form of TOS). Lesser degrees of arterial compression have been shown in normal individuals in various arm positions and are thought to be of little significance without the other criteria for arterial TOS.

By structures affected and symptomatology

There are three main types of TOS, named according to the cause of the symptoms; however, these three classifications have been coming into disfavor because TOS can involve all three types of compression to various degrees. The compression can occur in three anatomical structures (arteries, veins and nerves), it can be isolated, or, more commonly, two or three of the structures are compressed to greater or lesser degrees. In addition, the compressive forces can be of different magnitude in each affected structure. Therefore, symptoms can be variable.[13]

There are many causes of TOS. The most frequent cause is trauma, either sudden (as in a clavicle fracture caused by a car accident), or repetitive (as in a legal secretary who works with his/her hands, wrists, and arms at a fast paced desk station with non-ergonomic posture for many years)[citation needed]. TOS is also found in certain occupations involving lots of lifting of the arms and repetitive use of the wrists and arms[citation needed].

One cause of arterial compression is trauma, and a recent case involving fracture of the clavicle has been reported.[15]

The two groups of people most likely to develop TOS are those suffering from neck injuries due to traffic accidents and those who use computers in non-ergonomic postures for extended periods of time.[citation needed] TOS is frequently a repetitive stress injury (RSI) caused by certain types of work environments[citation needed]. Other groups which may develop TOS are athletes who frequently raise their arms above the head (such as swimmers, volleyball players, dancers, badminton players, baseball pitchers, and weightlifters), rock climbers, electricians who work long hours with their hands above their heads, and some musicians[citation needed].

It is also possible to classify TOS by the location of the obstruction:

Some people are born with an extra incomplete and very small rib above their first rib, which protrudes out into the superior thoracic outlet space. This rudimentary rib causes fibrous changes around the brachial plexus nerves, inducing compression and causing the symptoms and signs of TOS. This is called a "cervical rib" because of its attachment to C-7 (the 7th cervical vertebra), and its surgical removal is almost always recommended. The symptoms of TOS can first appear in the early teen years as a child is becoming more athletic.

Evidence for the treatment of thoracic outlet syndrome as of 2014 is poor.[16]

Stretching, occupational and physical therapy are common non-invasive approaches used in the treatment of TOS. The goal of stretching is to relieve compression in the thoracic cavity, reduce blood vessel and nerve impingement, and realign the bones, muscles, ligaments, or tendons that are causing the problem.

Ice can be used to decrease inflammation of sore or injured muscles. Heat can also aid in relieving sore muscles by improving blood circulation to them. While the whole arm generally feels painful in TOS, some relief can be seen when ice or heat is intermittently applied to the thoracic region (collar bone, armpit, or shoulder blades).

In a review, botox was compared to a placebo injected into the scalene muscles. No effect in terms of pain relief or improved movement was noted. However in a six-months follow-up, paresthesia (abnormal sensations such as in pins and needles) was seen to be significantly improved.[16]

Surgical approaches have also been used successfully in TOS. Microsurgery can be used approaching the area from above the collar bone (supraclavicular) followed by neurolysis of the brachial plexus, removal of the scalene muscle (scalenectomy), and the release of the underlying (subclavicular) blood vessels. This approach avoids the use of resection, and has been found to be an effective treatment.[17] In cases where the first rib (or a fibrous band extending from the first rib) is compressing a vein, artery, or the nerve bundle, part of the first rib and any compressive fibrous tissue, can be removed in a first rib resection and thoracic outlet decompression surgical procedure; scalene muscles may also need to be removed (scalenectomy). This allows increased blood flow and the reduction of nerve compression.[18] In some cases there may be a rudimentary rib or a cervical rib that can be causing the compression, which can be removed using the same technique.

Physical therapy is often used before and after the operation to improve recovery time and outcomes. Potential complications include pneumothorax, infection, loss of sensation, motor problems, subclavian vessel damage, and, as in all surgeries, a very small risk of permanent serious injury or death.

NHL defenseman Adam McQuaid was diagnosed with TOS in September 2012, and as a result was nominated for the Bill Masterton Memorial Trophy.[28] Forward Chris Kreider was diagnosed with a malformed rib in 2017. Kreider dealt with multiple symptoms prior to the diagnosis, such as shortness of breath on the ice, swelling/numbness in his right arm, coughing up blood and a blod clot in his right arm. Kreider underwent successful surgery to resect a rib in January 2018 (the same surgery as TOS) and has performed well since returning to the Rangers.[29]

Musician Isaac Hanson had a pulmonary embolism as a consequence of thoracic outlet syndrome.[33]

The Japanese band Maria disbanded in 2010 due to drummer Tattsu's TOS which made it impossible for her to continue playing.[34]

In 2015, singer Tamar Braxton had to leave Dancing With The Stars due to TOS.[35]