From WikiProjectMed
Jump to navigation Jump to search
For other uses, see Gangrene (disambiguation).

Gangrene is a type of tissue death caused by a lack of blood supply.[4] Symptoms may include a change in skin color to red or black, numbness, swelling, pain, skin breakdown, and coolness.[1] The feet and hands are most commonly affected.[1] Certain types may present with a fever or sepsis.[1]

Risk factors include diabetes, peripheral arterial disease, smoking, major trauma, alcoholism, HIV/AIDS, frostbite, and Raynaud's syndrome.[3][4] It can be classified as dry gangrene, wet gangrene, gas gangrene, internal gangrene, and necrotizing fasciitis.[3] The diagnosis of gangrene is based on symptoms and supported by tests such as medical imaging.[6]

Treatment may involve surgery to remove the dead tissue, antibiotics to treat any infection, and efforts to address the underlying cause.[5] Surgical efforts may include debridement, amputation, or the use of maggot therapy.[5] Efforts to treat the underlying cause may include bypass surgery or angioplasty.[5] In certain cases, hyperbaric oxygen therapy may be useful.[5] How commonly the condition occurs is unknown.[2] 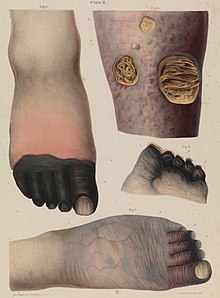 An illustration showing four different stages of gangrene, including one (Fig. 4 top right) caused by an obstacle to the return of the venous blood due to heart disease.

Symptoms may include a change in skin color to red or black, numbness, pain, skin breakdown, and coolness.[1] The feet and hands are most commonly involved.[1]

Gangrene is caused by a critically insufficient blood supply (e.g., peripheral vascular disease) or infection.[3][7][8] It is associated with diabetes[9] and long-term tobacco smoking.[4][3]

Dry gangrene is a form of coagulative necrosis that develops in ischemic tissue, where the blood supply is inadequate to keep tissue viable. It is not a disease itself, but a symptom of other diseases.[10] The term dry is used only when referring to a limb or to the gut (in other locations, this same type of necrosis is called an infarction, such as myocardial infarction).[11] Dry gangrene is often due to peripheral artery disease, but can be due to acute limb ischemia. As a result, people with arteriosclerosis, high cholesterol, diabetes and smokers commonly have dry gangrene.[12] The limited oxygen in the ischemic limb limits putrefaction and bacteria fail to survive. The affected part is dry, shrunken, and dark reddish-black. The line of separation usually brings about complete separation, with eventual falling off of the gangrenous tissue if it is not removed surgically, a process called autoamputation.[12]

Dry gangrene is the end result of chronic ischemia without infection. If ischemia is detected early, when ischemic wounds rather than gangrene are present, the process can be treated by revascularization (via vascular bypass or angioplasty).[13] However, once gangrene has developed, the affected tissues are not salvageable.[14] Because dry gangrene is not accompanied by infection, it is not as emergent as gas gangrene or wet gangrene, both of which have a risk of sepsis. Over time, dry gangrene may develop into wet gangrene if an infection develops in the dead tissues.[15] 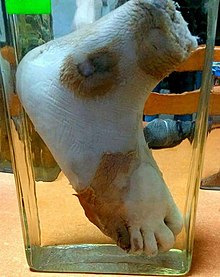 Wet gangrene of the foot

Wet, or infected, gangrene is characterized by thriving bacteria and has a poor prognosis (compared to dry gangrene) due to sepsis resulting from the free communication between infected fluid and circulatory fluid. In wet gangrene, the tissue is infected by saprogenic microorganisms (Clostridium perfringens or Bacillus fusiformis, for example), which cause tissue to swell and emit a foul odor. Wet gangrene usually develops rapidly due to blockage of venous (mainly) or arterial blood flow.[12] The affected part is saturated with stagnant blood, which promotes the rapid growth of bacteria. The toxic products formed by bacteria are absorbed, causing systemic manifestation of sepsis and finally death. The affected part is edematous, soft, putrid, rotten, and dark.

Gas gangrene is a bacterial infection that produces gas within tissues. It can be caused by Clostridium, most commonly alpha toxin-producing C. perfringens, or various nonclostridial species.[8][18] Infection spreads rapidly as the gases produced by the bacteria expand and infiltrate healthy tissue in the vicinity. Because of its ability to quickly spread to surrounding tissues, gas gangrene should be treated as a medical emergency.

Gas gangrene is caused by bacterial exotoxin-producing clostridial species, which are mostly found in soil, and other anaerobes such as Bacteroides and anaerobic streptococci. These environmental bacteria may enter the muscle through a wound and subsequently proliferate in necrotic tissue and secrete powerful toxins, which destroy nearby tissue, generating gas at the same time. A gas composition of 5.9% hydrogen, 3.4% carbon dioxide, 74.5% nitrogen, and 16.1% oxygen was reported in one clinical case.[19]

Gas gangrene can cause necrosis, gas production, and sepsis. Progression to toxemia and shock is often very rapid.

Treatment varies based on the severity and type of gangrene.[12]

Exercises such as walking and massage therapy may be tried.[12]

Medications may include pain management, medications that promote circulation in the circulatory system and antibiotics. Since gangrene is associated with periodic pain caused by too little blood flow, pain management is important so patients can continue doing exercises that promote circulation. Pain management medications can include opioids and opioid-like analgestics. Since gangrene is a result of ischemia, circulatory system management is important. These medications can include antiplatelet drug, anticoagulant, and fibrinolytics. As infection is often associated with gangrene, antibiotics are often a critical component of its treatment. The life-threatening nature of gangrene requires treatment with intravenous antibiotics in an inpatient setting.[12] Antibiotics alone are not effective because they may not penetrate infected tissues sufficiently.[23]

Surgical removal of all dead tissue, however, is the mainstay of treatment for gangrene. Often, gangrene is associated with underlying infection, thus the gangrenous tissue must be debrided to hinder the spread of the associated infection. The extent of surgical debridement needed depends on the extent of the gangrene, and may be limited to the removal of a finger, toe, or ear, but in severe cases may involve a limb amputation.[12]

Dead tissue alone does not require debridement, and in some cases, such as dry gangrene, the affected part falls off (autoamputates), making surgical removal unnecessary. Waiting for autoamputation however may cause health complications as well as decreased quality of life.[12]

After the gangrene is treated with debridement and antibiotics, the underlying cause can be treated. In the case of gangrene due to critical limb ischemia, revascularization can be performed to treat the underlying peripheral artery disease.

Ischemic disease of the legs is the most common reason for amputations. In about a quarter of these cases, the other side requires amputation in the next three years.[24]

Angioplasty should be considered if severe blockage in lower leg vessels (tibial and peroneal artery) leads to gangrene.[25] 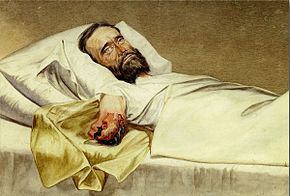 As early as 1028, flies and maggots were commonly used to treat chronic wounds or ulcers to prevent or arrest necrotic spread,[27] as some species of maggots consume only dead flesh, leaving nearby living tissue unaffected. This practice largely died out after the introduction of antibiotics, acetonitrile,[citation needed] and enzyme to the range of treatments for wounds. In recent times, however, maggot therapy has regained some credibility and is sometimes employed with great efficacy in cases of chronic tissue necrosis.[citation needed]

The French Baroque composer Jean-Baptiste Lully contracted gangrene in January 1687 when, while conducting a performance of his Te Deum, he stabbed his own toe with his pointed staff (which was used as a baton). The disease spread to his leg, but the composer refused to have his toe amputated, which eventually led to his death in March of that year.[28]

French King Louis XIV died of gangrene in his leg on 1 September 1715, four days prior to his 77th birthday.[29]

John M. Trombold wrote: "Middleton Goldsmith, a surgeon in the Union Army during the American Civil War, meticulously studied hospital gangrene and developed a revolutionary treatment regimen. The cumulative Civil War hospital gangrene mortality was 45%. Goldsmith's method, which he applied to over 330 cases, yielded a mortality under 3%."[30] Goldsmith advocated the use of debridement and topical and injected bromide solutions on infected wounds to reduce the incidence and virulence of "poisoned miasma". Copies of his book[31] were issued to Union surgeons to encourage the use of his methods.[32]

The etymology of gangrene derives from the Latin word gangraena and from the Greek gangraina (γάγγραινα), which means "putrefaction of tissues".[33] It has no etymological connection with the word green, despite the affected areas turning black, green, or yellowish brown.