Prevention is by rodent control.[1] Treatment is primarily supportive care and may include oxygen therapy or dialysis.[1] Ribavirin may be useful if used early.[1] NSAIDs should not be used due to concerns regarding the kidneys.[2] Depending on the virus involved, the risk of death is 1% to 15%.[1] Recovery can take weeks to months; however, people usually recovery fully.[1][2]

About 60,000 to 150,000 cases occur a year.[2] It occurs primarily in Asia and Europe with China and Russia having the most cases.[1][2] In a number of regions males are more commonly affected than females, which is attributed to greater time outdoors.[2] The first clear descriptions of the disease date from the 1930s.[3] The underlying cause was found in 1978.[4]

Bleeding into the conjunctiva as a result of HFRS[5]

Symptoms of HFRS usually develop within 1 to 2 weeks after exposure to infectious material, but in rare cases, they may take up to 8 weeks to develop. In Nephropathia epidemica, the incubation period is three weeks. Initial symptoms begin suddenly and include intense headaches, back and abdominal pain, fever, chills, nausea, and blurred vision. Individuals may have flushing of the face, inflammation or redness of the eyes, or a rash. Later symptoms can include low blood pressure, acute shock, vascular leakage, and acute kidney failure, which can cause severe fluid overload.

The severity of the disease varies depending upon the virus causing the infection. Hantaan and Dobrava virus infections usually cause severe symptoms, while Seoul, Saaremaa, and Puumala virus infections are usually more moderate. Complete recovery can take weeks or months.[6]

The course of the illness can be split into five phases:

Febrile phase
Symptoms include redness of cheeks and nose, fever, chills, sweaty palms, diarrhea, malaise, headaches, nausea, abdominal and back pain, respiratory problems such as the ones common in the influenza virus, as well as gastro-intestinal problems. These symptoms normally occur for three to seven days and arise about two to three weeks after exposure.[7]

Hypotensive phase
This occurs when the blood platelet levels drop and symptoms can lead to tachycardia and hypoxemia. This phase can last for 2 days.

Oliguric phase
This phase lasts for three to seven days and is characterised by the onset of renal failure and proteinuria.

Diuretic phase
This is characterized by diuresis of three to six litres per day, which can last for a couple of days up to weeks.

Convalescent phase
This is normally when recovery occurs and symptoms begin to improve.

This syndrome can also be fatal. In some cases, it has been known to cause permanent renal failure.[8] 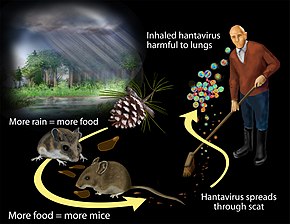 Transmission by aerosolized rodent excreta still remains the only known way the virus is transmitted to humans. In general, droplet and/or fomite transfer has not been shown in the hantaviruses in either the pulmonary or hemorrhagic forms.[9][10]

For Nephropathia epidemica, the bank vole is the reservoir for the virus, which humans contract through inhalation of aerosolised vole droppings.[11]

The pathogenesis of this condition indicates that 3 weeks is the incubation period for the virus. The virus causes vascular endothelial damage which causes loss of plasma, hypotension. [12]

Apparently the virus enters via beta-3 integrins receptors and then forces cytoskeletal reorganization. Additionally a severe immunological reaction of this condition can be a cytokine storm [12] 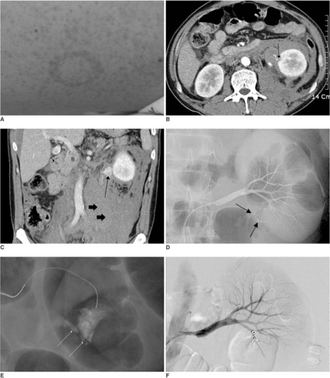 HFRS is difficult to diagnose on clinical grounds alone and serological evidence is often needed. A fourfold rise in IgG antibody titer in a 1-week interval and the presence of the IgM type of antibodies against hantaviruses are good evidence for an acute hantavirus infection. HFRS should be suspected in patients with acute febrile flu-like illness, kidney failure of unknown origin and sometimes liver dysfunction.[13]

Rodent control in and around the home remains the primary prevention strategy, as well as eliminating contact with rodents in the workplace and campsite. Closed storage sheds and cabins are often ideal sites for rodent infestations. Airing out of such spaces prior to use is recommended. Avoid direct contact with rodent droppings and wear a mask to avoid inhalation of aerosolized rodent secretions.[14]

There is no cure for HFRS. Treatment involves supportive therapy including renal dialysis. Treatment with ribavirin in China and Korea, administered within 7 days of onset of fever, resulted in a reduced mortality as well as shortened course of illness.[6][7]

HFRS is primarily a Eurasian disease, whereas HPS appears to be confined to the Americas. The geography is directly related to the indigenous rodent hosts and the viruses that coevolved with them.[13]

Although fatal in a small percentage of cases, nephropathia epidemica is generally milder than the HFRS that is caused by hantaviruses in other parts of the world.[15]

This infection is known as sorkfeber in Swedish and myyräkuume in Finnish (vole fever). In Norway, it is called musepest (mouse plague).