JEV is generally spread by mosquitoes, specifically those of the Culex type.[2] Pigs and wild birds serve as a reservoir for the virus.[2] The disease mostly occurs outside of cities.[2] Diagnosis is based on blood or cerebrospinal fluid testing.[2]

Prevention is generally with the Japanese encephalitis vaccine, which is both safe and effective.[2] Other measures include avoiding mosquito bites.[2] Once infected, there is no specific treatment, with care being supportive.[1] This is generally carried out in hospital.[1] Permanent problems occur in up to half of people who recover from JE.[2]

The disease occurs in Southeast Asia and the Western Pacific.[2] About 3 billion people live in areas where the disease occurs.[2] About 68,000 symptomatic cases occur a year, with about 17,000 deaths.[2] Often, cases occur in outbreaks.[2] The disease was first described in Japan in 1871.[2] Despite the name, it is rare in Japan due to immunization efforts.[4]

The Japanese encephalitis virus (JEV) has an incubation period of 2 to 26 days.[5] The vast majority of infections are asymptomatic: only 1 in 250 infections develop into encephalitis.[6]

Severe rigors may mark the onset of this disease in humans. Fever, headache and malaise are other non-specific symptoms of this disease which may last for a period of between 1 and 6 days. Signs which develop during the acute encephalitic stage include neck rigidity, cachexia, hemiparesis, convulsions and a raised body temperature between 38–41 °C (100.4–105.8 °F). Mental retardation is usually developed. Mortality of this disease varies but is generally higher in children. Transplacental spread has been noted. Lifelong neurological defects such as deafness, emotional lability and hemiparesis may occur in those who have had central nervous system involvement. In known cases, some effects also include nausea, headache, fever, and vomiting.[citation needed]

Increased microglial activation following Japanese Encephalitis infection has been found to influence the outcome of viral pathogenesis. Microglia are the resident immune cells of the central nervous system (CNS) and have a critical role in host defense against invading microorganisms. Activated microglia secrete cytokines, such as interleukin-1 (IL-1) and tumor necrosis factor alpha (TNF-α), which can cause toxic effects in the brain. Additionally, other soluble factors such as neurotoxins, excitatory neurotransmitters, prostaglandin, reactive oxygen, and nitrogen species are secreted by activated microglia.

In a murine model of JE, it was found that in the hippocampus and the striatum, the number of activated microglia was more than anywhere else in the brain closely followed by that in the thalamus. In the cortex, the number of activated microglia was significantly less when compared with other regions of the mouse brain. An overall induction of differential expression of proinflammatory cytokines and chemokines from different brain regions during a progressive Japanese Encephalitis infection was also observed.

Although the net effect of the proinflammatory mediators is to kill infectious organisms and infected cells as well as to stimulate the production of molecules that amplify the mounting response to damage, it is also evident that in a nonregenerating organ such as the brain, a dysregulated innate immune response would be deleterious. In JE the tight regulation of microglial activation appears to be disturbed, resulting in an autotoxic loop of microglial activation that possibly leads to bystander neuronal damage.[7] In animals, key signs include infertility and abortion in pigs, neurological disease in horses and systemic signs including fever, lethargy and anorexia.[8]

It is a disease caused by the mosquito-borne Japanese encephalitis virus (JEV).[9]

JEV is a virus from the family Flaviviridae, part of the Japanese encephalitis serocomplex of 9 genetically and antigenically related viruses, some which are particularly severe in horses, and four known to infect humans including West Nile virus.[10] The enveloped virus is closely related to the West Nile virus and the St. Louis encephalitis virus. The positive sense single-stranded RNA genome is packaged in the capsid which is formed by the capsid protein. The outer envelope is formed by envelope protein and is the protective antigen. It aids in entry of the virus into the inside of the cell. The genome also encodes several nonstructural proteins (NS1, NS2a, NS2b, NS3, N4a, NS4b, NS5). NS1 is produced as secretory form also. NS3 is a putative helicase, and NS5 is the viral polymerase. It has been noted that Japanese encephalitis infects the lumen of the endoplasmic reticulum (ER)[11][12] and rapidly accumulates substantial amounts of viral proteins.

JE virus IgM antibodies are usually detectable 3 to 8 days after onset of illness and persist for 30 to 90 days, but longer persistence has been documented. Therefore, positive IgM antibodies occasionally may reflect a past infection or vaccination. Serum collected within 10 days of illness onset may not have detectable IgM, and the test should be repeated on a convalescent sample. For patients with JE virus IgM antibodies, confirmatory neutralizing antibody testing should be performed.[citation needed] Confirmatory testing in the US is only available at CDC and a few specialized reference laboratories. In fatal cases, nucleic acid amplification, and virus culture of autopsy tissues can be useful. Viral antigen can be shown in tissues by indirect fluorescent antibody staining.[8] 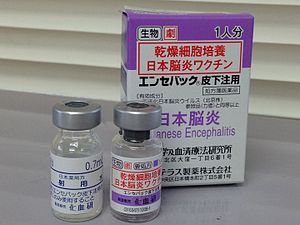 Infection with Japanese encephalitis confers lifelong immunity. There are currently three vaccines available: SA14-14-2, IXIARO (IC51, also marketed in Australia, New Zealand as JESPECT and India as JEEV[14]) and ChimeriVax-JE (marketed as IMOJEV).[15] All current vaccines are based on the genotype III virus.

A formalin-inactivated mouse-brain derived vaccine was first produced in Japan in the 1930s and was validated for use in Taiwan in the 1960s and in Thailand in the 1980s. The widespread use of vaccine and urbanization has led to control of the disease in Japan, Korea, Taiwan, and Singapore. The high cost of this vaccine, which is grown in live mice, means that poorer countries have not been able to afford to give it as part of a routine immunization program.[9]

The most common adverse effects are redness and pain at the injection site. Uncommonly, an urticarial reaction can develop about four days after injection. Vaccines produced from mouse brain have a risk of autoimmune neurological complications of around 1 per million vaccinations.[16] However where the vaccine is not produced in mouse brains but in vitro using cell culture there is little adverse effects compared to placebo, the main side effects are headache and myalgia.[17]

The neutralizing antibody persists in the circulation for at least two to three years, and perhaps longer.[18][19] The total duration of protection is unknown, but because there is no firm evidence for protection beyond three years, boosters are recommended every three years for people who remain at risk.[20] Furthermore, there is also no data available regarding the interchangeability of other JE vaccines and IXIARO.

There is no specific treatment for Japanese encephalitis and treatment is supportive,[21] with assistance given for feeding, breathing or seizure control as required. Raised intracranial pressure may be managed with mannitol.[22] There is no transmission from person to person and therefore patients do not need to be isolated.

A breakthrough in the field of Japanese encephalitis therapeutics is the identification of macrophage receptor involvement in the disease severity. A recent report of an Indian group demonstrates the involvement of monocyte and macrophage receptor CLEC5A in severe inflammatory response in Japanese Encephalitis infection of the brain. This transcriptomic study provides a hypothesis of neuroinflammation and a new lead in development of appropriate therapeutic against Japanese encephalitis.[23][24]

Japanese encephalitis (JE) is the leading cause of viral encephalitis in Asia, with up to 70,000 cases reported annually.[26] Case-fatality rates range from 0.3% to 60% and depend on the population and age. Rare outbreaks in U.S. territories in the Western Pacific have also occurred. Residents of rural areas in endemic locations are at highest risk; Japanese encephalitis does not usually occur in urban areas.

Countries which have had major epidemics in the past, but which have controlled the disease primarily by vaccination, include China, South Korea, Japan, Taiwan and Thailand. Other countries that still have periodic epidemics include Vietnam, Cambodia, Myanmar, India, Nepal, and Malaysia. Japanese encephalitis has been reported in the Torres Strait Islands and two fatal cases were reported in mainland northern Australia in 1998. There were reported cases in Kachin State, Myanmar in 2013. The spread of the virus in Australia is of particular concern to Australian health officials due to the unplanned introduction of Culex gelidus, a potential vector of the virus, from Asia. However, the current presence on mainland Australia is minimal. There had been 116 deaths reported in Odisha's backward Malkangiri district of India in 2016.[citation needed]

Human, cattle, and horses are dead-end hosts as the disease manifests as fatal encephalitis. Pigs act as an amplifying host and have a very important role in the epidemiology of the disease. Infection in swine is asymptomatic, except in pregnant sows, when abortion and fetal abnormalities are common sequelae. The most important vector is Culex tritaeniorhynchus, which feeds on cattle in preference to humans. The natural hosts of the Japanese encephalitis virus are birds, not humans, and many believe the virus will therefore never be completely eliminated.[27] In November 2011, the Japanese encephalitis virus was reported in Culex bitaeniorhynchus in South Korea.[28]

A number of drugs have been investigated to either reduce viral replication or provide neuroprotection in cell lines or studies upon mice. None are currently advocated in treating human patients.

The virus appears to have originated from its ancestral virus in the mid-1500s in the Indonesia-Malaysia region and evolved there into five different genotypes and spread across Asia.[36] The mean evolutionary rate has been estimated to be 4.35×10−4 (range: 3.4906×10−4 to 5.303×10−4) nucleotide substitutions per site per year.