Monkeypox is an infectious disease caused by the monkeypox virus that can occur in certain animals including humans.[2] Symptoms begin with fever, headache, muscle pains, swollen lymph nodes, and feeling tired.[1] This is followed by a rash that forms blisters and crusts over.[1] The time from exposure to onset of symptoms is around 10 days.[1] The duration of symptoms is typically 2 to 5 weeks.[1]

Monkeypox may be spread from handling bushmeat, an animal bite or scratch, body fluids, contaminated objects, or close contact with an infected person.[5] The virus is believed to normally circulate among certain rodents in Africa.[5] Diagnosis can be confirmed by testing a lesion for the virus's DNA.[3] The disease can appear similar to chickenpox.[4]

The smallpox vaccine is believed to prevent infection.[3] In 2019 a vaccine was approved for the disorder in the United States.[6] There is no known cure.[7] Cidofovir or brincidofovir may be useful.[4][7] The risk of death in those infected is up to 10%.[1][8]

The disease mostly occurs in Central and West Africa.[9] It was first identified in 1958 among laboratory monkeys.[9] The first cases in humans were found in 1970 in the Democratic Republic of the Congo.[9] An outbreak that occurred in the United States in 2003 was traced to a pet store where imported Gambian rodents were sold.[3]

An image of the rash of monkeypox

Monkeypox is similar to smallpox, although it is often milder.[10]

Limited person-to-person spread of infection has been reported in disease-endemic areas in Africa.[8]

Monkeypox virus causes the disease in both humans and animals. It was first identified in 1958 as a pathogen of crab-eating macaque monkeys (Macaca fascicularis) being used as laboratory animals. The crab-eating macaque is often used for neurological experiments. Monkeypox virus is an Orthopoxvirus, a genus of the family Poxviridae that contains other viral species that target mammals. The virus is found mainly in tropical rainforest regions of Central and West Africa.[2]

The virus was first discovered in monkeys (hence the name) in 1958, and in humans in 1970. Between 1970 and 1986, over 400 cases in humans were reported. Small viral outbreaks with a death rate in the range of 10% and a secondary human-to-human infection rate of about the same amount occur routinely in equatorial Central and West Africa.[11] The primary route of infection is thought to be contact with the infected animals or their bodily fluids.[11] The first reported outbreak outside of the African continent occurred in the United States in 2003 in the Midwestern states of Illinois, Indiana, and Wisconsin, with one occurrence in New Jersey. The outbreak was traced to a prairie dog infected from an imported Gambian pouch rat.[3] No deaths occurred.[12]

Humans can be infected by an animal via a bite, or by direct contact with an infected animal’s bodily fluids. The virus can also spread from human to human, by respiratory (airborne) contact or by contact with an infected person's bodily fluids. Risk factors for transmission include sharing a bed or room, or using the same utensils as an infected person. An increased transmission risk is associated with factors involving introduction of virus to the oral mucosa.[13] The incubation period is 10–14 days. Prodromal symptoms include swelling of lymph nodes, muscle pain, headache, and fever prior to the emergence of the rash. The rash is usually only present on the trunk, but may spread to the palms and soles of the feet in a centrifugal distribution. The initial macular lesions exhibit a papular, then vesicular and pustular appearance.[13]

In addition to monkeys, reservoirs for the virus are found in Gambian pouched rats (Cricetomys gambianus), dormice (Graphiurus spp.) and African squirrels (Heliosciurus, and Funisciurus). The use of these animals as food may be an important source of transmission to humans.[14]

Diagnosis can be verified by testing for the virus. The virus does not remain very long in the blood, and hence blood testing may not detect the disease. Test results interpreted together with clinical features.[10]

Vaccination against smallpox is assumed to provide protection against human monkeypox infection, because they are closely related viruses and the vaccine protects animals from experimental lethal monkeypox challenge.[15] This has not been conclusively demonstrated in humans, because routine smallpox vaccination was discontinued following the apparent eradication of smallpox and owing to safety concerns with the vaccine.

Smallpox vaccine has been reported to reduce the risk of monkeypox among previously vaccinated persons in Africa. The decrease in immunity to poxviruses in exposed populations is a factor in the prevalence of monkeypox. It is attributed both to waning cross-protective immunity among those vaccinated before 1980 when mass smallpox vaccinations were discontinued, and to the gradually increasing proportion of unvaccinated individuals.[13] The United States Centers for Disease Control and Prevention (CDC) recommends that persons investigating monkeypox outbreaks and involved in caring for infected individuals or animals should receive a smallpox vaccination to protect against monkeypox. Persons who have had close or intimate contact with individuals or animals confirmed to have monkeypox should also be vaccinated.

The CDC does not recommend pre-exposure vaccination for unexposed veterinarians, veterinary staff, or animal control officers, unless such persons are involved in field investigations.

Currently, no treatment for monkeypox has been shown to be effective or safe.[7] A number of measures may be used to try to decrease spread of the disease including the smallpox vaccine, cidofovir, and vaccinia immune globulin (VIG).[7]

Monkeypox as a disease in humans was first associated with an illness in the Democratic Republic of the Congo (formerly Zaire), in the town of Basankusu, Équateur Province, in 1970.[16] A second outbreak of human illness was identified in DRC/Zaire in 1996–1997. In 2003, a small outbreak of human monkeypox in the United States occurred among owners of pet prairie dogs.[17] The outbreak originated from Villa Park, Illinois, outside of Chicago, when an exotic animal dealer kept young prairie dogs in close proximity to an infected Gambian pouched rat (Cricetomys gambianus) recently imported from Accra, Ghana. Seventy-one people were reportedly infected, in which no fatalities occurred. In 2005, 49 cases were reported Sudan for the first time. No one who was infected died.[18] The genetic analysis suggests that the virus did not originate in Sudan but was imported, most likely from DRC.[19]

Many more monkeypox cases have been reported in Central and West Africa, and in the Democratic Republic of Congo in particular. The collected data is often incomplete and unconfirmed which hinders realistic estimations of the people affected and the number of cases of monkeypox over time. Nevertheless, it was suggested that the number of reported monkeypox cases has increased and that the geographical occurrence broadened in recent years.[20] 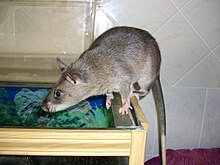 In May 2003, a young child became ill with fever and rash after being bitten by a prairie dog purchased at a local swap meet near Milwaukee, Wisconsin.[21] In total, 71 cases of monkeypox were reported through June 20, 2003. All cases were traced to Gambian pouched rats imported by a Texas exotic animal distributor, from Accra, Ghana, in April, 2003. No deaths resulted.[22] Electron microscopy and serologic studies were used to confirm that the disease was human monkeypox.

People with monkeypox typically experienced prodromal symptoms of fever, headaches, muscle aches, chills, and drenching sweats. Roughly one-third of infected people had nonproductive coughs. This prodromal phase was followed 1–10 days later by the development of a papular rash that typically progressed through stages of vesiculation, pustulation, umbilication, and crusting. In some people, early lesions had become ulcerated. Rash distribution and lesions occurred on head, trunk, and extremities; many of the people had initial and satellite lesions on palms, soles, and extremities. Rashes were generalized in some people. After onset of the rash, people generally manifested rash lesions in different stages. Everyone affected reported direct or close contact with prairie dogs, later found to be infected with the monkeypox virus.[23]

Monkeypox has been reportedly spread around southeast and south Nigeria. Some states and the federal government of Nigeria are currently seeking a way to contain it, as well as find a cure for the infected ones. It has spread to Akwa Ibom, Abia, Bayelsa, Benue, Cross River, Delta, Edo, Ekiti, Enugu, Imo, Lagos, Nasarawa, Oyo, Plateau, Rivers and Federal Capital Territory.[24][25] The outbreak started in September 2017 and remains ongoing across multiple states as of May 2019.[26]

In September 2018, the United Kingdom's first case of monkeypox was recorded. The person, a Nigerian national, is believed to have contracted monkeypox in Nigeria before travelling to the United Kingdom.[27] According to Public Health England, the person was staying in a naval base in Cornwall before being moved to the Royal Free Hospital's specialised infectious disease unit. People who had been in contact with the person since he contracted the disease were contacted.[28] A second case was confirmed in the town of Blackpool,[29][30] with a further case that of a medical worker who cared for the case from Blackpool.[31] A fourth case occurred on 3 December 2019, when monkeypox was diagnosed in a person in south west England. They were travelling to the UK from Nigeria.[32]

On 8 May 2019, a 38-year-old man who travelled from Nigeria was hospitalised in an isolation ward at the National Centre for Infectious Diseases in Singapore, after being confirmed as the country's first case of monkeypox. As a result, 22 people were quarantined.[33] The case may be linked to the ongoing outbreak in Nigeria.[26] 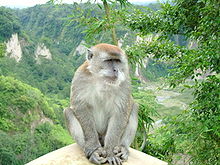 A Cynomolgus monkey, or crab-eating macaque

Monkeypox was first reported by Preben von Magnus in 1958 in laboratory cynomolgus monkeys, when two outbreaks of a smallpox-like disease occurred in colonies of monkeys kept for research.[2] The first report of monkeypox in humans was discovered more than a decade later, in a person with a suspected smallpox infection in the Democratic Republic of Congo during efforts to eradicate smallpox.[2][4] It was subsequently reported in humans in other central and western African countries.[2] Almost 50 cases were reported between 1970 and 1979, with more than two thirds of these being from Zaire. The other cases originated from Liberia, Nigeria, Ivory Coast and Sierra Leone.[34]