From WikiProjectMed
Jump to navigation Jump to search
Not to be confused with De Quervain's thyroiditis.

De Quervain syndrome is inflammation of two tendons that control movement of the thumb and their tendon sheath.[3] This results in pain at the outside of the wrist.[3] Pain is typically increased with gripping or rotating the wrist.[3] The thumb may also be difficult to move smoothly.[4] Onset of symptoms is gradual.[4]

Risk factors include certain repetitive movements, pregnancy, trauma, and rheumatic diseases.[4][3] The diagnosis is generally based on symptoms and physical examination.[3] Diagnosis is supported if pain increases when the wrist is bent inwards while a person is grabbing their thumb within a fist.[4]

Treatment involves avoiding activities that bring on the symptoms, pain medications such as NSAIDs, and splinting the thumb.[4] If this is not effective steroid injections or surgery may be recommended.[4] The condition affects about 0.5% of males and 1.3% of females.[5] Those who are middle aged are most often affected.[3] It was first described in 1895 by Fritz de Quervain.[5] 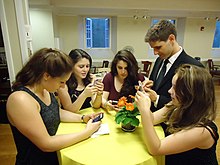 Young people using their smartphones with their thumbs.

The cause of de Quervain's disease is not established. Evidence regarding a possible relation with occupational risk factors is debated.[6][7] A systematic review of potential risk factors discussed in the literature did not find any evidence of a causal relationship with occupational factors.[8] However, researchers in France found personal and work-related factors were associated with de Quervain's disease in the working population; wrist bending and movements associated with the twisting or driving of screws were the most significant of the work-related factors.[9] Proponents of the view that De Quervain syndrome is a repetitive strain injury[10] consider postures where the thumb is held in abduction and extension to be predisposing factors.[6] Workers who perform rapid repetitive activities involving pinching, grasping, pulling or pushing have been considered at increased risk.[7] Specific activities that have been postulated as potential risk factors include intensive computer mouse use, trackball use,[6] and typing, as well as some pastimes, including bowling, golf, fly-fishing, piano-playing, sewing, and knitting.[7]

Women are affected more often than men.[7] The syndrome commonly occurs during and after pregnancy.[11] Contributory factors may include hormonal changes, fluid retention and—more debatably—lifting.[11][12] 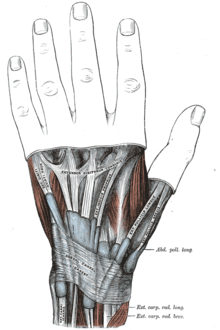 The mucous sheaths of the tendons on the back of the wrist.

De Quervain syndrome involves noninflammatory thickening of the tendons and the synovial sheaths that the tendons run through. The two tendons concerned are those of the extensor pollicis brevis and abductor pollicis longus muscles. These two muscles run side by side and function to bring the thumb away from the hand; the extensor pollicis brevis brings the thumb outwards radially, and the abductor pollicis longus brings the thumb forward away from the palm. De Quervain tendinopathy affects the tendons of these muscles as they pass from the forearm into the hand via a fibro-osseous tunnel (the first dorsal compartment). Evaluation of histopathological specimens shows a thickening and myxoid degeneration consistent with a chronic degenerative process, as opposed to inflammation.[13] The pathology is identical in de Quervain seen in new mothers.[14]

De Quervain syndrome is diagnosed clinically, based on history and physical examination, though diagnostic imaging such as X-ray may be used to rule out fracture, arthritis, or other causes, based on the person's history and presentation. The modified Eichoff maneuver, commonly called the Finkelstein's test, is a physical exam maneuver used to diagnose de Quervain syndrome.[2] To perform the test, the examiner grasps and ulnar deviates the hand when the person has their thumb held within their fist.[15][2] If sharp pain occurs along the distal radius (top of forearm, about an inch below the wrist), de Quervain's syndrome is likely. While a positive Finkelstein's test is often considered pathognomonic for de Quervain syndrome, the maneuver can also cause pain in those with osteoarthritis at the base of the thumb.[2]

As with many musculoskeletal conditions, the management of de Quervain's disease is determined more by convention than scientific data. A systematic review and meta-analysis published in 2013 found that corticosteroid injection seems to be an effective form of conservative management of de Quervain's syndrome in approximately 50% of patients, although more research is needed regarding the extent of any clinical benefits.[17] Efficacy data are relatively sparse and it is not clear whether benefits affect the overall natural history of the illness.[medical citation needed]

Most tendinoses are self-limiting and the same is likely to be true of de Quervain's although further study is needed.[medical citation needed]

Palliative treatments include a splint that immobilized the wrist and the thumb to the interphalangeal joint and anti-inflammatory medication or acetaminophen. Systematic review and meta-analysis do not support the use of splinting over steroid injections.[18][19]

Surgery (in which the sheath of the first dorsal compartment is opened longitudinally) is documented to provide relief in most patients.[20] The most important risk is to the radial sensory nerve.

Some occupational and physical therapists use other treatments, in conjunction with Therapeutic Exercises, based on the rationale that they reduce inflammation and pain and promote healing: UST, SWD, or other deep heat treatments, as well as TENS, acupuncture, or infrared light therapy, and cold laser treatments. However, the pathology of the condition is not inflammatory changes to the synovial sheath and inflammation is secondary to the condition from friction.[21] Teaching patients to reduce their secondary inflammation does not treat the underlying condition but may reduce their pain; which is helpful when trying to perform the prescribed exercise interventions.

Getting Physical Therapy before surgery or injections has been shown to reduce overall costs to patients and is a viable option to treat a wide array of musculoskeletal injuries.

From the original description of the illness in 1895 until the first description of corticosteroid injection by Jarrod Ismond in 1955,[22] it appears that the only treatment offered was surgery.[22][23][24] Since approximately 1972, the prevailing opinion has been that of McKenzie (1972) who suggested that corticosteroid injection was the first line of treatment and surgery should be reserved for unsuccessful injections.[25]

BlackBerry thumb is a neologism that refers to a form of repetitive strain injury (RSI) caused by the frequent use of the thumbs to press buttons on PDAs, smartphones, or other mobile devices. The name of the condition comes from the BlackBerry, a brand of smartphone that debuted in 1999,[27] although there are numerous other similar eponymous conditions that exist such as "Wiiitis",[28] "Nintendinitis",[29] "Playstation thumb", "texting thumb",[30] "cellphone thumb",[31] "smartphone thumb", "Android thumb", and "iPhone thumb". The medical name for the condition is De Quervain syndrome and is associated with the tendons connected to the thumb through the wrist. Causes for the condition extend beyond smartphones and gaming consoles to include activities like golf, racket sports, and lifting.[32]

Symptoms of BlackBerry thumb include aching and throbbing pain in the thumb and wrist.[33] In severe cases, it can lead to temporary disability of the affected hand, particularly the ability to grip objects.[34]

One hypothesis is that the thumb does not have the dexterity the other four fingers have and is therefore not well-suited to high speed touch typing.[35]