Cyanide poisoning is poisoning that results from exposure to a number of forms of cyanide.[4] Early symptoms include headache, dizziness, fast heart rate, shortness of breath, and vomiting.[2] This may then be followed by seizures, slow heart rate, low blood pressure, loss of consciousness, and cardiac arrest.[2] Onset of symptoms is usually within a few minutes.[2][3] If a person survives, there may be long-term neurological problems.[2]

Toxic cyanide-containing compounds include hydrogen cyanide gas and a number of cyanide salts.[2] Poisoning is relatively common following breathing in smoke from a house fire.[2] Other potential routes of exposure include workplaces involved in metal polishing, certain insecticides, the medication nitroprusside, and certain seeds such as those of apples and apricots.[3][7][8] Liquid forms of cyanide can be absorbed through the skin.[9] Cyanide ions interfere with cellular respiration, resulting in the body's tissues being unable to use oxygen.[2]

Diagnosis is often difficult.[2] It may be suspected in a person following a house fire who has a decreased level of consciousness, low blood pressure, or high blood lactate.[2] Blood levels of cyanide can be measured but take time.[2] Levels of 0.5–1 mg/L are mild, 1–2 mg/L are moderate, 2–3 mg/L are severe, and greater than 3 mg/L generally result in death.[2]

If exposure is suspected, the person should be removed from the source of exposure and decontaminated.[3] Treatment involves supportive care and giving the person 100% oxygen.[2][3] Hydroxocobalamin (vitamin B12a) appears to be useful as an antidote and is generally first-line.[2][6] Sodium thiosulphate may also be given.[2] Historically cyanide has been used for mass suicide and by Nazi Germany for genocide.[3]

If cyanide is inhaled it can cause a coma with seizures, apnea, and cardiac arrest, with death following in a matter of seconds. At lower doses, loss of consciousness may be preceded by general weakness, dizziness, headaches, vertigo, confusion, and perceived difficulty in breathing. At the first stages of unconsciousness, breathing is often sufficient or even rapid, although the state of the person progresses towards a deep coma, sometimes accompanied by pulmonary edema, and finally cardiac arrest. A cherry red skin color that changes to dark may be present as the result of increased venous hemoglobin oxygen saturation. Despite the similar name, cyanide does not directly cause cyanosis. A fatal dose for humans can be as low as 1.5 mg/kg body weight.[10]

Exposure to lower levels of cyanide over a long period (e.g., after use of improperly processed cassava roots, which are a primary food source in tropical Africa) results in increased blood cyanide levels, which can result in weakness and a variety of symptoms, including permanent paralysis, nervous lesions,[11][12][13] hypothyroidism,[12] and miscarriages.[14][15] Other effects include mild liver and kidney damage.[16][17]

Removal of cyanide poison from cassava in Nigeria

Acute hydrogen cyanide poisoning can result from inhalation of fumes from burning polymer products that use nitriles in their production, such as polyurethane,[18] or vinyl.[19] It can also be caused by breakdown of nitroprusside into nitric oxide and cyanide.[8] Nitroprusside may be used during treatment of hypertensive crisis.[8]

In addition to its uses as a pesticide and insecticide, cyanide is contained in tobacco smoke and smoke from building fires, and is present in many seeds or kernels such as those of almonds, apricots, apples, oranges, and in foods including cassava (also known as tapioca, yuca or manioc), and bamboo shoots. Vitamin B12, in the form of hydroxocobalamin (also spelled hydroxycobalamin), may reduce the negative effects of chronic exposure, and a deficiency can lead to negative health effects following exposure.[20]

Cyanide poisoning is a form of histotoxic hypoxia because the cells of an organism are unable to create ATP, primarily through the inhibition of the mitochondrial enzyme cytochrome c oxidase. Cyanide is quickly metabolized to 2-amino-2-thiazoline-4-carboxylic acid and thiocyanate with a half life of 10–30 minutes as a detoxifying mechanism. Within a few hours of single ingestion, no cyanide can be detected, since all of it is metabolized unless death occurs first. Thiocyanate has a long half life of >24hrs, and is typically eliminated through the kidneys. Thiocyanate possesses ~0.01% the toxicity of the cyanide parent molecule.

Lactate concentrations above 10 mmol per liter are an indicator of cyanide poisoning, as defined by the presence of a blood cyanide concentration above 40 µmol per liter. Lactate levels greater than 6 mmol/L after reported or strongly suspected pure cyanide poisoning, such as cyanide-containing smoke exposure, suggests significant cyanide exposure.[22]

Methods of detection include colorimetric assays such as the Prussian blue test, the pyridine-barbiturate assay, also known as the "Conway diffusion method"[23] and the taurine fluorescence-HPLC but like all colorimetric assays these are prone to false positives. Lipid peroxidation resulting in "TBARS," an artifact of heart attack produces dialdehydes that cross-react with the pyridine-barbiturate assay. Meanwhile, the taurine-fluorescence-HPLC assay used for cyanide detection is identical to the assay used to detect glutathione in spinal fluid.

Cyanide and thiocyanate assays have been run with mass spectrometry (LC/MS/MS), which are considered specific tests. Since cyanide has a short half-life, the main metabolite, thiocyanate is typically measured to determine exposure. Other methods of detection include the identification of plasma lactate.

Decontamination of people exposed to hydrogen cyanide gas only requires removal of the outer clothing and the washing of their hair.[9] Those exposed to liquids or powders generally require full decontamination.[9]

The United States standard cyanide antidote kit first uses a small inhaled dose of amyl nitrite, followed by intravenous sodium nitrite, followed by intravenous sodium thiosulfate.[24] Hydroxocobalamin is newly approved in the US and is available in Cyanokit antidote kits.[25] Sulfanegen TEA, which could be delivered to the body through an intra-muscular (IM) injection, detoxifies cyanide and converts the cyanide into thiocyanate, a less toxic substance.[26] Alternative methods of treating cyanide intoxication are used in other countries.

The República Cromañón nightclub fire occurred in Buenos Aires, Argentina on 30 December 2004, killing 194 people and leaving at least 1,492 injured. Most of the victims died from inhaling poisonous gases, and carbon monoxide. After the fire the technical institution INTI found that the level of toxicity due to the materials and volume of the building was 225 ppm of cyanide in the air. A lethal dose for rats is between 150 ppm and 220 ppm, meaning the air in the building was highly toxic.

On 5 December 2009, a fire in the night club Lame Horse (Khromaya Loshad) in the Russian city of Perm took the lives of 156 people. Fatalities consisted of 111 people at the site and 45 later in hospitals. One of the main causes of death was poisoning from cyanide and other toxic gases released by the burning of plastic and polyurethane foam used in the construction of club interiors. Taking into account the number of deaths, this was the largest fire in post-Soviet Russia.[citation needed]

On 27 January 2013, a fire at the Kiss nightclub in the city of Santa Maria, in the south of Brazil, caused the poisoning of hundreds of young people by cyanide released by the combustion of soundproofing foam made with polyurethane. By March 2013, 241 fatalities were confirmed.[39][40][when?] 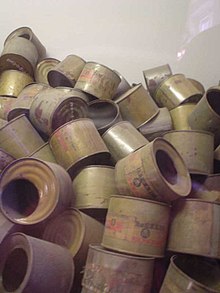 Empty Zyklon B canisters, found by the Soviets in January 1945 at Auschwitz

In early 1942, Zyklon B, which contains hydrogen cyanide, emerged as the preferred killing tool of Nazi Germany for use in extermination camps during the Holocaust.[41] The chemical was used to kill roughly one million people in gas chambers installed in extermination camps at Auschwitz-Birkenau, Majdanek, and elsewhere.[42] Most of the people who were killed were Jews, and by far the majority killed using this method died at Auschwitz.[43][44][lower-alpha 1] Zyklon B was supplied to concentration camps at Mauthausen, Dachau, and Buchenwald by the distributor Heli, and to Auschwitz and Majdanek by Testa. Camps also occasionally bought Zyklon B directly from the manufacturers.[46] Of the 729 tonnes of Zyklon B sold in Germany in 1942–44, 56 tonnes (about eight percent of domestic sales) were sold to concentration camps.[47] Auschwitz received 23.8 tonnes, of which six tonnes were used for fumigation. The remainder was used in the gas chambers or lost to spoilage (the product had a stated shelf life of only three months).[48] Testa conducted fumigations for the Wehrmacht and supplied them with Zyklon B. They also offered courses to the SS in the safe handling and use of the material for fumigation purposes.[49] In April 1941, the German agriculture and interior ministries designated the SS as an authorized applier of the chemical, and thus they were able to use it without any further training or governmental oversight.[50]

Hydrogen cyanide gas has been used for judicial execution in some states of the United States, where cyanide was generated by reaction between potassium cyanide (or sodium cyanide[51][52]) dropped into a compartment containing sulfuric acid, directly below the chair in the gas chamber.[53]

Cobinamide is the final compound in the biosynthesis of cobalamin. It has greater affinity for the cyanide than cobalamin itself, which suggests that it could be a better option for emergency treatment.[69]