Salicylate poisoning, also known as aspirin poisoning, is the acute or chronic poisoning with a salicylate such as aspirin.[1] The classic symptoms are ringing in the ears, nausea, abdominal pain, and a fast breathing rate.[1] Early on, these may be subtle, while larger doses may result in fever.[1][4] Complications can include swelling of the brain or lungs, seizures, low blood sugar, or cardiac arrest.[1]

While usually due to aspirin, other possible causes include oil of wintergreen and bismuth subsalicylate.[2] Excess doses can be either on purpose or accidental.[1] Small amounts of oil of wintergreen can be toxic.[2] Diagnosis is generally based on repeated blood tests measuring aspirin levels and blood gases.[1] While a type of graph has been created to try to assist with diagnosis, its general use is not recommended.[1] In overdose maximum blood levels may not occur for more than 12 hours.[2]

Efforts to prevent poisoning include child-resistant packaging and a lower number of pills per package.[1] Treatment may include activated charcoal, intravenous sodium bicarbonate with dextrose and potassium chloride, and dialysis.[2] Giving dextrose may be useful even if the blood sugar is normal.[2] Dialysis is recommended in those with kidney failure, decreased level of consciousness, blood pH less than 7.2, or high blood salicylate levels.[2] If a person requires intubation, a fast respiratory rate may be required.[1]

The toxic effects of salicylates have been described since at least 1877.[5] In 2004, more than 20,000 cases with 43 deaths were reported in the United States.[1] About 1% of those with an acute overdose die, while chronic overdoses may have worse outcomes.[3] Older people are at higher risks of toxicity for any given dose.[5] 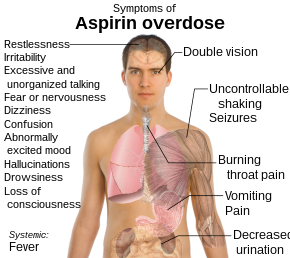 The severity of toxicity depends on the amount of aspirin taken.

Acute aspirin or salicylates overdose or poisoning can cause initial respiratory alkalosis though metabolic acidosis ensues thereafter. The acid-base, fluid, and electrolyte abnormalities observed in salicylate toxicity can be grouped into three broad phases:

The acutely toxic dose of aspirin is generally considered greater than 150 mg per kg of body mass.[10] Moderate toxicity occurs at doses up to 300 mg/kg, severe toxicity occurs between 300 and 500 mg/kg, and a potentially lethal dose is greater than 500 mg/kg.[11] Chronic toxicity may occur following doses of 100 mg/kg per day for two or more days.[11]

Monitoring of biochemical parameters such as electrolytes and solutes, liver and kidney function, urinalysis, and complete blood count is undertaken along with frequent checking of salicylate and blood sugar levels. Arterial blood gas assessments typically find respiratory alkalosis early in the course of the overdose due to hyperstimulation of the respiratory center, and may be the only finding in a mild overdose. An anion-gap metabolic acidosis occurs later in the course of the overdose, especially if it is a moderate to severe overdose, due to the increase in protons (acidic contents) in the blood.

The diagnosis of poisoning usually involves measurement of plasma salicylate, the active metabolite of aspirin, by automated spectrophotometric methods. Plasma salicylate levels generally range from 30–100 mg/l (3–10 mg/dl) after usual therapeutic doses, 50–300 mg/l in patients taking high doses, and 700–1400 mg/l following acute overdose.[12] Patients may undergo repeated testing until their peak plasma salicylate level can be estimated.[13] Optimally, plasma levels should be assessed four hours after ingestion and then every two hours after that to allow calculation of the maximum level, which can then be used as a guide to the degree of toxicity expected.[14] Patients may also be treated according to their individual symptoms.

Efforts to prevent poisoning include child-resistant packaging and a lower number of pills per package.[1]

Initial treatment of an acute overdose involves resuscitation followed by gastric decontamination by administering activated charcoal, which adsorbs the aspirin in the gastrointestinal tract. Stomach pumping is no longer routinely used in the treatment of poisonings, but is sometimes considered if the patient has ingested a potentially lethal amount less than one hour before presentation.[15] Inducing vomiting with syrup of ipecac is not recommended.[10] Repeated doses of charcoal have been proposed to be beneficial in cases of aspirin overdosing,[16] although one study found that they might not be of significant value.[17] Regardless, most clinical toxicologists administer additional charcoal if serum salicylate levels are increasing.

Intravenous fluids containing dextrose such as dextrose 5% in water (D5W) are recommended to keep a urinary output between 2 and 3 ml/kg/h.[18]

Sodium bicarbonate is given in a significant aspirin overdose (salicylate level greater than 35 mg/dl 6 hours after ingestion) regardless of the serum pH, as it enhances elimination of aspirin in the urine. It is given until a urine pH between 7.5 and 8.0 is achieved.[19]

Hemodialysis can be used to enhance the removal of salicylate from the blood, usually in those who are severely poisoned. Examples of severe poisoning include people with high salicylate blood levels: 7.25 mmol/l (100 mg/dl) in acute ingestions or 40 mg/dl in chronic ingestions,[19] significant neurotoxicity (agitation, coma, convulsions), kidney failure, pulmonary edema, or cardiovascular instability.[13] Hemodialysis also has the advantage of restoring electrolyte and acid-base abnormalities while removing salicylate.[20]

During the latter part of the 20th century, the number of poisonings from salicylates declined, mainly because of the increased popularity of other over-the-counter analgesics such as paracetamol (acetaminophen). Fifty-two deaths involving single-ingredient aspirin were reported in the United States in 2000; however, in all but three of these cases, the reason for the ingestion of lethal doses was intentional—predominantly suicidal.[21]

Aspirin poisoning has controversially been cited as a possible cause of the high mortality rate during the 1918 flu pandemic, which killed 50 to 100 million people.[22]