Patent ductus arteriosus (PDA) is when the connection between the aorta and pulmonary artery (the ductus arteriosus) fails to close after birth.[3] Early on there are generally no symptoms; however, later shortness of breath, failure to gain weight at a normal rate, or difficulty exercising may occur.[1][4] Complications may include heart failure, pulmonary hypertension, necrotizing enterocolitis, kidney failure, and intraventricular hemorrhage.[2]

The cause is generally unknown.[1] Risk factors include premature birth, maternal diabetes, cocaine, calcium channel blockers, and birth at high elevation.[2] It is associated with a number of genetic syndromes including trisomy 13, Down syndrome, and DiGeorge syndrome.[2] The ductus arteriosus is a fetal blood vessel that normally closes within 24 to 48 hours after birth.[2] The diagnosis may be suspected based on a continuous heart murmur and confirmed by ultrasound of the heart.[2]

Treatment may be recommended in those with symptoms.[2] This may include the use of NSAIDs such as ibuprofen or surgery.[2] Otherwise if it does not close on its own within 8 weeks treatment is recommended.[2] Outcomes are generally good.[2]

While common overall, it is rare in full term otherwise healthy babies.[3][2] In those weighing less than 1 kilogram at birth, 70% are affected at 7 days.[2] It is also present in 10% of people with other congenital heart disorders.[2] The ductus arteriosus was first described in the 100s AD by Galen.[5] Surgical treatment was first carried out in 1938.[6] 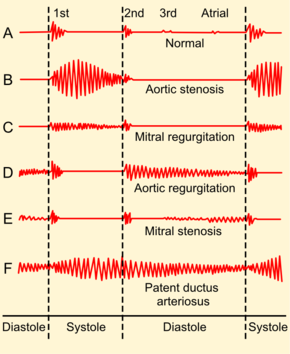 PDA is usually diagnosed using noninvasive techniques. Echocardiography (in which sound waves are used to capture the motion of the heart) and associated Doppler studies are the primary methods of detecting PDA. Electrocardiography (ECG), in which electrodes are used to record the electrical activity of the heart, is not particularly helpful as no specific rhythms or ECG patterns can be used to detect PDA.[8]

Some evidence suggests that indomethacin administration on the first day of life to all preterm infants reduces the risk of developing a PDA and the complications associated with PDA. Indomethacin treatment in premature infants also may reduce the need for surgical intervention.[9]

Neonates without adverse symptoms may simply be monitored as outpatients, while symptomatic PDA can be treated with both surgical and non-surgical methods.[10] Surgically, the DA may be closed by ligation (though support in premature infants is mixed),[11] either manually tied shut, or with intravascular coils or plugs that leads to formation of a thrombus in the DA.

Because prostaglandin E2 is responsible for keeping the DA open, NSAIDs (which can inhibit prostaglandin synthesis) such as indomethacin or a special form of ibuprofen have been used to initiate PDA closure.[7][13][14] Recent findings from a systematic review concluded that, for closure of a PDA in preterm and/or low birth weight infants, ibuprofen is as effective as indomethacin. It also causes fewer side effects (such as transient acute kidney injury) and reduces the risk of necrotising enterocolitis.[15] A review and meta-analysis showed that paracetamol may be effective for closure of a PDA in preterm infants.[16] A recent network meta-analysis that compared indomethacin, paracetamol and ibuprofen at different doses and administration schemes among them found that a high dose of oral ibuprofen may offer the highest likelihood of closure in preterm infants.[17]

While indomethacin can be used to close a PDA, some neonates require their PDA be kept open. Keeping a ductus arteriosus patent is indicated in neonates born with concurrent heart malformations, such as transposition of the great arteries. Drugs such as alprostadil, a PGE-1 analog, can be used to keep a PDA open until the primary defect is corrected surgically.

If left untreated, the disease may progress from left-to-right shunt (acyanotic heart) to right-to-left shunt (cyanotic heart), called Eisenmenger's syndrome. Pulmonary hypertension is a potential long-term outcome, which may require a heart or lung transplant. Another complication of PDA is intraventricular hemorrhage.

Since PDA is usually identified in infants, it is less common in adults, but it can have serious consequences, and is usually corrected surgically upon diagnosis.

Robert E. Gross, MD performed the first successful ligation of a patent ductus arteriosus on a seven-year-old girl at Children's Hospital Boston in 1938.[18]