Medullary sponge kidney is a birth defect characterized by small cysts in the inner part of the kidneys.[2] Onset of symptoms; however, does not generally occur until late childhood or early adulthood.[2] Symptoms may include those or a urinary tract infection (UTI) such as burning with urination or kidney stone such as flank pain and blood in the urine.[2] Kidney failure is rare.[2]

The cause is unclear.[2] Most cases do not appear to be inherited from a persons parents.[2] The underlying mechanism involves dilation of the collecting ducts and tubules in the renal pyramids.[3] One or both kidneys may be involved.[2] Diagnosis may be supported by medical imaging.[2]

There is no cure.[2] Treatment involves addressing UTIs and kidney stones.[2] Long term antibiotics may be used to prevent infections.[2] Frequency of kidneys stones may be decreased with with potassium citrate or HCTZ.[2] Drinking plenty of fluids may also help.[2]

About 1 in 5,000 people are affected.[2] Up to 20% of people who develop calcium-based kidney stones have the condition.[2] Women are generally more severely affected than men.[2] It was first described in 1908 by Beitzke.[1]

Most cases are asymptomatic or are discovered during an investigation of blood in the urine. Symptomatic patients typically present as middle-aged adults with renal colic, kidney stones, nephrocalcinosis and/or recurrent urinary tract infections; however, MSK also may affect children very rarely. In addition to the typical clinical phenotype of recurrent stone disease, other clinical profiles have now been recognized, that is, an indolent, almost asymptomatic MSK, and a rare form characterized by intractable pain.[4]

Complications associated with medullary sponge kidney include the following:

In recent studies, insight has been obtained on the genetic basis of this disease, supporting the hypothesis that MSK is due to a disruption at the 'ureteric bud-metanephric mesenchyme' interface. This explains why so many tubular defects coexist in this disease, and particularly a distal tubular acidification defect of which the highly prevalent metabolic bone disease is one very important consequence. In addition to the typical clinical phenotype of recurrent stone disease, other clinical profiles have now been recognized, that is, an indolent, almost asymptomatic MSK, and a rare form characterized by intractable, excruciating pain.[6] It was previously believed that most cases of medullary sponge kidney were sporadic; however, recent studies show familial clustering of MSK is common and has an autosomal dominant inheritance, a reduced penetrance, and variable expressivity.[7][8] Other theories suggest that dilatation of a collecting duct may occur, caused by occlusion by uric acid during fetal life or resulting from tubular obstruction due to calcium oxalate calculi secondary to infantile hypercalciuria.[5]

A rare, autosomal recessive form is associated with Caroli disease.[5] 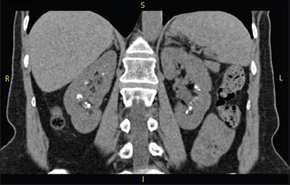 Classically, MSK is seen as hyperechoic papillae with clusters of small stones on ultrasound examination of the kidney or with an abdominal x-ray. The irregular (ectatic) collecting ducts are often seen in MSK, which are sometimes described as having a "paintbrush-like" appearance, are best seen on intravenous urography. However, IV urography has been largely replaced by contrast-enhanced, high-resolution helical CT with digital reconstruction.[9]

Often, aggressive treatment is unnecessary for people with MSK disease that does not cause any symptoms (asymptomatic).[9] In such cases, treatment may consist of maintaining adequate fluid intake, with the goal of decreasing the risk of developing kidney stones (nephrolithiasis).[9] Cases of recurrent kidney stone formation may warrant evaluation for possible underlying metabolic abnormalities.[9]

In patients with low levels of citrate in the urine (hypocitraturia) and incomplete distal renal tubular acidosis, treatment with potassium citrate helps prevent the formation of new kidney stones.[9] Urinary tract infections, when they occur, should also be treated.[9]

Patients with the more rare form of MSK marked by chronic pain typically require pain management. Non-obstructing stones in MSK can be associated with significant and chronic pain even if they're not passing. It is not certain what causes this pain, but researchers have proposed that the small numerous stones seen in MSK may cause obstruction of the small tubules and collecting ducts in the kidney. This pain can be constant, can often be debilitating and treatment is challenging. Narcotic medication, even in large quantities, is sometimes not adequate. Some success with pain control has been reported using laser lithotripsy (called "ureteroscopic laser papillotomy").[10]