Polycystic kidney disease (PKD, PCKD) is a genetic disorder that results in many cysts growing within the kidneys.[4] They may form before birth, during childhood, or in adulthood.[6] When cysts develop before birth growth failure or breathing problems may occur.[3] Otherwise symptoms may include flank pain, blood in the urine, and headaches.[2] Complications may include kidney failure, high blood pressure, liver cysts, aortic aneurysm, and cerebral aneurysm.[4]

It occurs as a result of a genetic mutation.[4] Generally this is inherited from a persons parents though may rarely occur spontaneously during early development.[4] The cysts form from non-functioning tubules that have fluid pumped into them.[7] There are two types autosomal dominant polycystic kidney disease (ADPKD) and autosomal recessive polycystic kidney disease (ARPKD).[4] The diagnosis maybe confirmed by medical imaging or genetic testing.[2][3]

There is no cure.[2][3] Treatment may include lifestyle changes and medications to reduce blood pressure such as ACE inhibitors.[4] Kidney failure may be managed with dialysis or kidney transplant.[4] About 30% of those with ARPKD die within the first few weeks of life.[3] More than half of people with ADPKD develop kidney failure by the age of 70.[2]

Signs and symptoms include high blood pressure, headaches, abdominal pain, blood in the urine, and excessive urination.[1] Other symptoms include pain in the back, and cyst formation (renal and other organs).[9]

Most cases progress to bilateral disease in adulthood.[10] 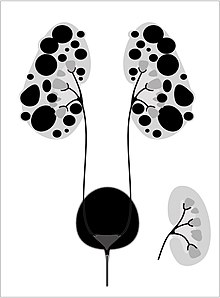 Genetic mutations in any of the three genes PKD1, PKD2, and PKD3 have similar phenotypical presentations.

Autosomal recessive polycystic kidney disease (ARPKD) (OMIM #263200) is the lesser common of the two types of PKD, with an incidence of 1:20,000 live births and is typically identified in the first few weeks after birth. Unfortunately, the kidneys are often underdeveloped resulting in a 30% death rate in newborns with ARPKD. PKHD1 is involved.[10][12] 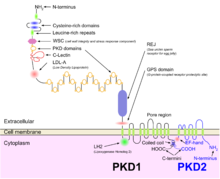 Both autosomal dominant and autosomal recessive polycystic kidney disease cyst formation are tied to abnormal cilia-mediated signaling. The polycystin-1 and polycystin-2 proteins appear to be involved in both autosomal dominant and recessive polycystic kidney disease due to defects in both proteins.[15] Both proteins have communication with calcium channel proteins, and causes reduction in resting (intracellular) calcium and endoplasmic reticulum storage of calcium.[16]

The disease is characterized by a ‘second hit’ phenomenon, in which a mutated dominant allele is inherited from a parent, with cyst formation occurring only after the normal, wild-type gene sustains a subsequent second genetic ‘hit’, resulting in renal tubular cyst formation and disease progression.[17]

PKD results from defects in the primary cilium, an immotile, hair-like cellular organelle present on the surface of most cells in the body, anchored in the cell body by the basal body.[17] In the kidney, primary cilia have been found to be present on most cells of the nephron, projecting from the apical surface of the renal epithelium into the tubule lumen. The cilia were believed to bend in the urine flow, leading to changes in signalling, however this has since been shown to be an experimental error (the bending of cilia was an artifact of focal plane compensation, and also the actual effect on micturition by severe hypertension and cardiac arrest) and that bending of cilia does not contribute to alterations in Ca flux. While it is not known how defects in the primary cilium lead to cyst development, it is thought to possibly be related to disruption of one of the many signaling pathways regulated by the primary cilium, including intracellular calcium, Wnt/β-catenin, cyclic adenosine monophosphate (cAMP), or planar cell polarity (PCP). Function of the primary cilium is impaired, resulting in disruption of a number of intracellular signaling cascades which produce differentiation of cystic epithelium, increased cell division, increased apoptosis, and loss of resorptive capacity.[12][17] 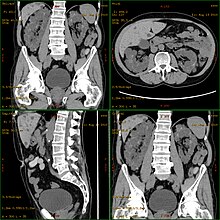 Polycystic kidney disease can be ascertained via a CT scan of abdomen, as well as, an MRI and ultrasound of the same area. A physical exam/test can reveal enlarged liver, heart murmurs and elevated blood pressure[1]

If and when the disease progresses enough in a given case, the nephrologist or other practitioner and the patient will have to decide what form of renal replacement therapy will be used to treat end-stage kidney disease (kidney failure, typically stage 4 or 5 of chronic kidney disease).[18]

That will either be some form of dialysis, which can be done at least two different ways at varying frequencies and durations (whether it is done at home or in the clinic depends on the method used and the patient's stability and training) and eventually, if they are eligible because of the nature and severity of their condition and if a suitable match can be found, unilateral or bilateral kidney transplantation.[18]

A Cochrane Review study of autosomal dominant polycystic kidney disease made note of the fact that it is important at all times, while avoiding antibiotic resistance, to control infections of the cysts in the kidneys, and if affected, the liver, when needed for a certain duration to combat infection, by using, "bacteriostatic and bacteriocidal drugs".[12][18]

ADPKD individuals might have a normal life; conversely, ARPKD can cause kidney dysfunction and can lead to kidney failure by the age of 40–60. ADPKD1 and ADPKD2 are very different, in that ADPKD2 is much milder.[19]

Currently, there are no therapies proven effective to prevent the progression of ADPKD.[20]

PKD is one of the most common hereditary diseases in the United States, affecting more than 600,000 people. It is the cause of nearly 10% of all end-stage renal disease. It equally affects men, women, and all races.[21] PKD occurs in some animals as well as humans.[22][23]