Posterior urethral valve (PUV) is a disorder were the urethra in a newborn male is blocked by a fold of tissue.[1] Symptoms after birth may include poor feeding or failure to thrive.[1] It may be associated with urinary retention, chronic kidney disease, incomplete development of the lungs, urinary incontinence, or urinary tract infections.[1]

How and why the disorder forms in unclear.[2] Risk factors include a family history.[2] They can be divided into three types based on the proposed origin of the fold of tissue.[1] The potential origins of the fold; however, is disputed as of 2020.[1] Diagnosis may occur before birth by ultrasound or after birth via voiding cystourethrography.[1]

Surgery may be carried out before birth; however, results are mixed.[1] After birth the bladder may be drained with a feeding tube.[1] Other efforts may be required to address electrolyte or breathing problems.[1] Surgery is required to remove the fold of tissue and potentially to treat any vesicoureteric reflux.[1]

Posterior urethral valve occurs in about one in 5,000 male births.[1] The condition was first described in 1717 by Giovanni Battista Morgagni.[1] The classification into types occurred in 1919 by Hugh Young.[3] 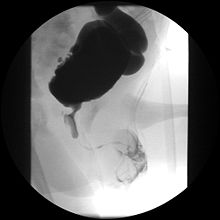 Postvesicular obstruction due to urethral valves.

Abdominal ultrasound is of some benefit, but not diagnostic. Features that suggest posterior urethral valves are bilateral hydronephrosis, a thickened bladder wall with thickened smooth muscle trabeculations, and bladder diverticula.[citation needed]

Voiding cystourethrogram (VCUG) is more specific for the diagnosis. Normal plicae circularis are variable in appearance and often not seen on normal VCUGs. PUV on voiding cystourethrogram is characterized by an abrupt tapering of urethral caliber near the verumontanum, with the specific level depending on the developmental variant. Vesicoureteral reflux is also seen in over 50% of cases. Very often the posterior urethra maybe dilated thus making the abrupt narrowing more obvious. the bladder wall may show trabeculations or sacculations or even diverticuli.[citation needed]

Diagnosis can also be made by cystoscopy, where a small camera is inserted into the urethra for direct visualization of the posteriorly positioned valve. A limitation of this technique is that posterior valve tissue is translucent and can be pushed against the wall of the urethra by inflowing irrigation fluid, making it difficult to visualize. Cystoscopy may also demonstrate the bladder changes.[citation needed]

Centers in Europe and Japan have also had excellent results with cystosonography, although it has not been approved for use in the United States yet.[4] 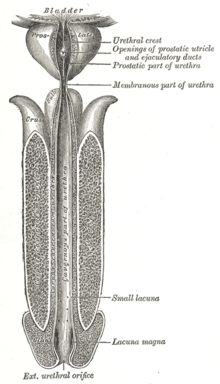 The male urethra laid open on its anterior (upper) surface. Posterior valves are usually fusion of the plicae colliculi between the entrance of the seminal vesicles at the veromontanum, and extend to the membranous urethra.

Posterior urethral obstruction was first classified by H. H. Young in 1919. The verumontanum, or mountain ridge, is a distinctive landmark in the prostatic urethra, important in the systemic division of posterior valve disorders:[citation needed]

Dewan has suggested that obstruction in the posterior urethra is more appropriately termed congenital obstructions of the posterior urethral membrane (COPUMs), a concept that has come from an in-depth analysis of the historical papers, and evaluation of patients with a prenatal diagnosis that has facilitated video recording of the uninstrumented obstructed urethra.[6] The congenital obstructive lesions in the bulbar urethra, named Type III Valves by Young in 1919, have been eponymously referred to as Cobb's collar or Moorman's ring.[7] For each of the COPUM (Posterior Urethra) and Cobb's (Bulbar Urethra) lesions, the degree of obstruction can be variable, consistent with a variable expression of the embryopathy.[8] The now nearly one hundred year old nomenclature of posterior urethral valves was based on limited radiology and primitive endoscopy, thus a change COPUM or Cobb's has been appropriate.[citation needed]

If suspected antenatally, a consultation with a paediatric surgeon/ paediatric urologist maybe indicated to evaluate the risk and consider treatment options.

Treatment is by endoscopic valve ablation. Fetal surgery is a high risk procedure reserved for cases with severe oligohydramnios, to try to limit the associated lung underdevelopment, or pulmonary hypoplasia, that is seen at birth in these patients. The risks of fetal surgery are significant and include limb entrapment, abdominal injury, and fetal or maternal death. Specific procedures for in utero intervention include infusions of amniotic fluid, serial bladder aspiration, and creating a connection between the amniotic sac and the fetal bladder, or vesicoamniotic shunt.[4]

There are three specific endoscopic treatments of posterior urethral valves:

The standard treatment is primary (transurethral) ablation of the valves.[9] Urinary diversion is used in selected cases,[9] and its benefit is disputed.[10][11]

Following surgery, the follow-up in patients with posterior urethral valve syndrome is long term, and often requires a multidisciplinary effort between paediatric surgeons/ paediatric urologists, paediatric nephrologists, pulmonologists, neonatologists, radiologists and the family of the patient. Care must be taken to promote proper bladder compliance and renal function, as well as to monitor and treat the significant lung underdevelopment that can accompany the disorder. Definitive treatment may also be indicated for the vesico-ureteral reflux.

The female homolog to the male verumontanum from which the valves originate is the hymen.