From WikiProjectMed
Jump to navigation Jump to search
Not to be confused with XYY syndrome.

Klinefelter syndrome (KS), also known as 47, XXY is the set of symptoms that result from two or more X chromosomes in males.[3] The primary features are infertility and small poorly functioning testicles.[3][9] Often, symptoms may be subtle and many people do not realize they are affected.[1] Sometimes, symptoms are more prominent and may include weaker muscles, greater height, poor coordination, less body hair, breast growth, and less interest in sex.[1] Often it is only at puberty that these symptoms are noticed.[5] Intelligence is usually normal; however, reading difficulties and problems with speech are more common.[1] Symptoms are typically more severe if three or more X chromosomes are present (48,XXXY syndrome or 49,XXXXY syndrome).[1]

Klinefelter syndrome occurs randomly.[4] The extra X chromosome comes from the father and mother nearly equally.[10] An older mother may have a slightly increased risk of a child with KS.[4] The condition is not typically inherited from one's parents.[4] The underlying mechanisms involves at least one extra X chromosome in addition to a Y chromosome such that the total chromosome number is 47 or more rather than the usual 46.[9] KS is diagnosed by the genetic test known as a karyotype.[5]

While no cure is known, a number of treatments may help.[7] Physical therapy, speech and language therapy, counselling, and adjustments of teaching methods may be useful.[6] Testosterone replacement may be used in those who have significantly lower levels.[6] Enlarged breasts may be removed by surgery.[6] About half of affected males have a chance of fathering children with the help of assisted reproductive technology, but this is expensive and not risk free.[6] XXY males appear to have a higher risk of breast cancer than typical, but still lower than that of females.[11] People with the condition have a nearly normal life expectancy.[7]

Klinefelter syndrome is one of the most common chromosomal disorders, occurring in one to two per 1,000 live male births.[4][8] It is named after American endocrinologist Harry Klinefelter, who identified the condition in the 1940s.[12] In 1956, identification of the extra X chromosome was first noticed.[13] Mice can also have the XXY syndrome, making them a useful research model.[14]

A person with typical untreated (surgery/hormones) Klinefelter 46,XY/47,XXY mosaic, diagnosed at age 19 - the scar from biopsy may be visible on left nipple.

The primary features are infertility and small poorly functioning testicles.[3][9] Often, symptoms may be subtle and many people do not realize they are affected.[1] Sometimes, symptoms are more prominent and may include weaker muscles, greater height, poor coordination, less body hair, breast growth, and less interest in sex.[1] Often it is only at puberty that these symptoms are noticed.[5]

It has been estimated that 60% of infants with Klinefelter syndrome result in miscarriage.[15]

As babies and children, XXY males may have weaker muscles and reduced strength. As they grow older, they tend to become taller than average. They may have less muscle control and coordination than other boys of their age.[16]

During puberty, the physical traits of the syndrome become more evident; because these boys do not produce as much testosterone as other boys, they have a less muscular body, less facial and body hair, and broader hips. As teens, XXY males may develop breast tissue[17] and also have weaker bones, and a lower energy level than other males.[16]

By adulthood, XXY males look similar to males without the condition, although they are often taller. In adults, possible characteristics vary widely and include little to no sign of affectedness, a lanky, youthful build and facial appearance, or a rounded body type with some degree of gynecomastia (increased breast tissue).[18] Gynecomastia is present to some extent in about a third of affected individuals, a slightly higher percentage than in the XY population. About 10% of XXY males have gynecomastia noticeable enough that they may choose to have cosmetic surgery.[19]

Affected males are often infertile, or may have reduced fertility. Advanced reproductive assistance is sometimes possible.[20] It has been estimated that 50% of males with Klinefelter syndrome can produce sperm.[21]

The term hypogonadism in XXY symptoms is often misinterpreted to mean "small testicles" when it means decreased testicular hormone/endocrine function. Because of this (primary) hypogonadism, individuals often have a low serum testosterone level, but high serum follicle-stimulating hormone and luteinizing hormone levels.[22] Despite this misunderstanding of the term, however, XXY men may also have microorchidism (i.e., small testicles).[22]

XXY males are also more likely than other men to have certain health problems, such as autoimmune disorders, breast cancer, venous thromboembolic disease, and osteoporosis.[16][26] In contrast to these potentially increased risks, rare X-linked recessive conditions are thought to occur less frequently in XXY males than in normal XY males, since these conditions are transmitted by genes on the X chromosome, and people with two X chromosomes are typically only carriers rather than affected by these X-linked recessive conditions.[citation needed]

Some degree of language learning or reading impairment may be present,[27] and neuropsychological testing often reveals deficits in executive functions, although these deficits can often be overcome through early intervention.[28] Also, delays in motor development may occur, which can be addressed through occupational and physical therapies.[29] XXY males may sit up, crawl, and walk later than other infants; they may also struggle in school, both academically and with sports.[16] It’s estimated that 10% of men with Klinefelter syndrome are have autism.[30] 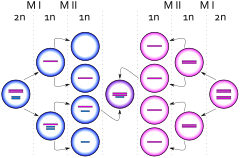 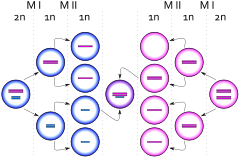 Maternal age is the only known risk factor.[10] Women at 40 years have a four times higher risk for a child with Klinefelter syndrome than women aged 24 years.[32][33]

Another mechanism for retaining the extra chromosome is through a nondisjunction event during meiosis II in the egg. Nondisjunction occurs when sister chromatids on the sex chromosome, in this case an X and an X, fail to separate. An XX egg is produced, which when fertilized with a Y sperm, yields an XXY offspring. This XXY chromosome arrangement is one of the most common genetic variations from the XY karyotype, occurring in about one in 500 live male births.[16] See also Triple X syndrome.

Approximately 15-20% of males with KS may have a mosaic 47,XXY/46,XY constitutional karyotype and varying degrees of spermatogenic failure.[38] Often symptoms are milder in mosaic cases, with regular male secondary sex characteristics and testicular volume even falling within typical adult ranges.[38] Another possible mosaicism is 47,XXY/46,XX with clinical features suggestive of KS and male phenotype, but this is very rare. Thus far, only about 10 cases of 47,XXY/46,XX have been described in literature.[39]

The standard diagnostic method is the analysis of the chromosomes' karyotype on lymphocytes. A small blood sample is sufficient as test material. In the past, the observation of the Barr body was common practice, as well.[41] To investigate the presence of a possible mosaicism, analysis of the karyotype using cells from the oral mucosa is performed. Physical characteristics of a Klinefelter syndrome can be tall stature, low body hair and occasionally an enlargement of the breast. There is usually a small testicle volume of 1–5 ml per testicle (standard values: 12–30 ml).[42] During puberty and adulthood, low testosterone levels with increased levels of the pituitary hormones FSH and LH in the blood can indicate the presence of Klinefelter syndrome. A spermiogram can also be part of the further investigation. Often there is an azoospermia present, rarely an oligospermia.[10] Furthermore, Klinefelter syndrome can be diagnosed as a coincidental prenatal finding in the context of invasive prenatal diagnosis (amniocentesis, chorionic villus sampling). About 10% of KS cases are found by prenatal diagnosis.[43]

The symptoms of KS are often variable; therefore, a karyotype analysis should be ordered when small testes, infertility, gynecomastia, long arms/legs, developmental delay, speech/language deficits, learning disabilities/academic issues, and/or behavioral issues are present in an individual.[9]

The genetic variation is irreversible, thus there is no causal therapy. From the onset of puberty, the existing testosterone deficiency can be compensated by appropriate hormone replacement therapy.[44] Testosterone preparations are available in the form of syringes, patches or gel. If gynecomastia is present, the surgical removal of the breast may be considered for both the psychological reasons and to reduce the risk of breast cancer.[45]

The use of behavioral therapy can mitigate any language disorders, difficulties at school, and socialization. An approach by occupational therapy is useful in children, especially those who have dyspraxia.[46] 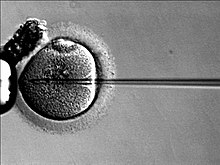 Methods of reproductive medicine, such as intracytoplasmic sperm injection (ICSI) with previously conducted testicular sperm extraction (TESE), have led to men with Klinefelter's syndrome to produce biological offspring.[47] By 2010, over 100 successful pregnancies have been reported using IVF technology with surgically removed sperm material from males with KS.[48]

The lifespan of individuals with Klinefelter syndrome appears to be reduced by approximately 2.1 years compared to the general male population.[49] These results are still questioned data, are not absolute, and need further testing.[50]

This syndrome, evenly distributed in all ethnic groups, has a prevalence of one to two subjects per every 1000 males in the general population.[32][51][52][53] However, it is estimated that only 25% of the individuals with Klinefelter syndrome are diagnosed throughout their lives.[44] 3.1% of infertile males have Klinefelter syndrome. The syndrome is also the main cause of male hypogonadism.[54]

The syndrome was named after American endocrinologist Harry Klinefelter, who in 1942 worked with Fuller Albright and E. C. Reifenstein at Massachusetts General Hospital in Boston, Massachusetts, and first described it in the same year.[18][55] The account given by Klinefelter came to be known as Klinefelter syndrome as his name appeared first on the published paper, and seminiferous tubule dysgenesis was no longer used. Considering the names of all three researchers, it is sometimes also called Klinefelter–Reifenstein–Albright syndrome.[56] In 1956 it was discovered that Klinefelter syndrome resulted from an extra chromosome.[13] Plunkett and Barr found the sex chromatin body in cell nuclei of the body.[57] This was further clarified as XXY in 1959 by Patricia Jacobs and John Anderson Strong.[58] The first published report of a man with a 47,XXY karyotype was by Patricia Jacobs and John Strong at Western General Hospital in Edinburgh, Scotland, in 1959.[58] This karyotype was found in a 24-year-old man who had signs of KS. Jacobs described her discovery of this first reported human or mammalian chromosome aneuploidy in her 1981 William Allan Memorial Award address.[59]