Prader–Willi syndrome (PWS) is a genetic disorder caused by a loss of function of specific genes.[3] In newborns, symptoms include weak muscles, poor feeding, and slow development.[3] Beginning in childhood, those affected become constantly hungry, which often leads to obesity and type 2 diabetes.[3] Mild to moderate intellectual impairment and behavioral problems are also typical of the disorder.[3] Often, affected individuals have a narrow forehead, small hands and feet, short height, light skin and hair, and are unable to have children.[3]

About 74% of cases occur when part of the father's chromosome 15 is deleted.[3] In another 25% of cases, the affected person has two copies of chromosome 15 from the mother and none from the father.[3] As parts of the chromosome from the mother are turned off, they end up with no working copies of certain genes.[3] PWS is not generally inherited, but rather the genetic changes happen during the formation of the egg, sperm, or in early development.[3] No risk factors are known for the disorder.[7] Those who have one child with PWS have less than a 1% chance of the next child being affected.[7] A similar mechanism occurs in Angelman syndrome, except the defective chromosome 15 is from the mother, or two copies are from the father.[8][9]

Prader–Willi syndrome has no cure.[4] Treatment may improve outcomes, especially if carried out early.[4] In newborns, feeding difficulties may be supported with feeding tubes.[6] Strict food supervision is typically required, starting around the age of three, in combination with an exercise program.[6] Growth hormone therapy also improves outcomes.[6] Counseling and medications may help with some behavioral problems.[6] Group homes are often necessary in adulthood.[6]

PWS affects between 1 in 10,000 and 1 in 30,000 people.[3] The condition is named after Swiss physicians Andrea Prader and Heinrich Willi who, together with Alexis Labhart, described it in detail in 1956.[1] An earlier description was made in 1887 by British physician John Langdon Down.[10][11] 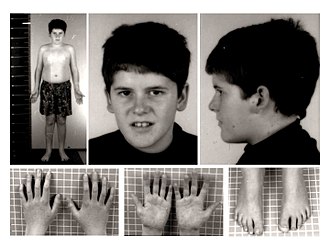 PWS has many signs and symptoms. The symptoms can range from poor muscle tone during infancy to behavioral problems in early childhood. Some symptoms that are usually found in infants, besides poor muscle tone, are a lack of eye coordination, some are born with almond-shaped eyes, and due to poor muscle tone, some may not have a strong sucking reflex. Their cries are weak, and they have difficulty waking up. Another sign of this condition is a thin upper lip.[12]

Holm et al. (1993) describe the following features and signs as indicators of PWS, although not all will be present.[citation needed]

Individuals with PWS are at risk of learning and attention difficulties. Curfs and Fryns (1992) conducted research into the varying degrees of learning disability found in PWS.[14] Their results, using a measure of IQ, were as follows:[citation needed]

Children with PWS show an unusual cognitive profile. They are often strong in visual organization and perception, including reading and vocabulary, but their spoken language (sometimes affected by hypernasality) is generally poorer than their comprehension. A marked skill in completing jigsaw puzzles has been noted,[16][17] but this may be an effect of increased practice.[18]

Auditory information processing and sequential processing are relatively poor, as are arithmetic and writing skills, visual and auditory short-term memory, and auditory attention span. These sometimes improve with age, but deficits in these areas remain throughout adulthood.[16]

PWS may be associated with psychosis.[19]

PWS is frequently associated with a constant insatiable appetite, which persists no matter how much the patient eats, often resulting in morbid obesity. Caregivers need to strictly limit the patients' access to food, usually by installing locks on refrigerators and on all closets and cabinets where food is stored.[20] It is the most common genetic cause of morbid obesity in children.[21] Currently, no consensus exists as to the cause for this symptom, although genetic abnormalities in chromosome 15 disrupt the normal functioning of the hypothalamus.[15] Given that the hypothalamic arcuate nucleus regulates many basic processes, including appetite, a link may well exist. In the hypothalamus of people with PWS, nerve cells that produce oxytocin, a hormone thought to contribute to satiety, have been found to be abnormal.[citation needed]

People with PWS have high ghrelin levels, which are thought to directly contribute to the increased appetite, hyperphagia, and obesity seen in this syndrome.[22] Cassidy states the need for a clear delineation of behavioral expectations, the reinforcement of behavioural limits, and the establishment of regular routines.

The main mental health difficulties experienced by people with PWS include compulsive behaviour (usually manifested in skin picking) and anxiety.[16][23] Psychiatric symptoms, for example, hallucinations, paranoia and depression, have been described in some cases[16] and affect about 5–10% of young adults.[15] Patients are also often extremely stubborn and prone to anger.[20] Psychiatric and behavioural problems are the most common cause of hospitalization.[24]

Typically, 70–90% of affected individuals develop behavioral patterns in early childhood.[13] Aspects of these patterns can include stubbornness, temper tantrums, controlling and manipulative behavior, difficulty with change in routine, and compulsive-like behaviors.[13]

Several aspects of PWS support the concept of a growth hormone deficiency. Specifically, individuals with PWS have short stature, are obese with abnormal body composition, have reduced fat-free mass, have reduced lean body mass and total energy expenditure, and have decreased bone density.

PWS is characterized by hypogonadism. This is manifested as undescended testes in males and benign premature adrenarche in females. Testes may descend with time or can be managed with surgery or testosterone replacement. Adrenarche may be treated with hormone replacement therapy.

PWS is commonly associated with development of strabismus. In one study,[25] over 50% of patients had strabismus, mainly esotropia.

PWS is caused by an epigenetic phenomenon known as imprinting, caused by the deletion of the paternal copies of the SNRPN and NDN necdin genes along with clusters of snoRNAs: SNORD64, SNORD107, SNORD108 and two copies of SNORD109, 29 copies of SNORD116 (HBII-85) and 48 copies of SNORD115 (HBII-52). These are on chromosome 15 located in the region 15q11-13.[26][27][28][29] This so-called PWS/AS region may be lost by one of several genetic mechanisms, which in the majority of instances occurs through chance mutation. Other, less common mechanisms include uniparental disomy, sporadic mutations, chromosome translocations, and gene deletions. Due to imprinting, the maternally inherited copies of these genes are virtually silent, and only the paternal copies of the genes are expressed.[30][31] PWS results from the loss of paternal copies of this region. Deletion of the same region on the maternal chromosome causes Angelman syndrome (AS). PWS and AS represent the first reported instances of imprinting disorders in humans.

A microdeletion in one family of the snoRNA HBII-52 has excluded it from playing a major role in the disease.[32]

It is traditionally characterized by hypotonia, short stature, hyperphagia, obesity, behavioral issues (specifically obsessive–compulsive disorder-like behaviors), small hands and feet, hypogonadism, and mild intellectual disability.[38] However, with early diagnosis and early treatment (such as with growth hormone therapy), the prognosis for persons with PWS is beginning to change. Like autism, PWS is a spectrum disorder and symptoms can range from mild to severe and may change throughout the person's lifetime. Various organ systems are affected.

Traditionally, PWS was diagnosed by clinical presentation. Currently, the syndrome is diagnosed through genetic testing; testing is recommended for newborns with pronounced hypotonia. Early diagnosis of PWS allows for early intervention and the early prescription of growth hormone. Daily recombinant growth hormone (GH) injections are indicated for children with PWS. GH supports linear growth and increased muscle mass, and may lessen food preoccupation and weight gain.

The mainstay of diagnosis is genetic testing, specifically DNA-based methylation testing to detect the absence of the paternally contributed PWS/AS region on chromosome 15q11-q13. Such testing detects over 97% of cases. Methylation-specific testing is important to confirm the diagnosis of PWS in all individuals, but especially those who are too young to manifest sufficient features to make the diagnosis on clinical grounds or in those individuals who have atypical findings.

PWS has no cure; several treatments are available to lessen the condition's symptoms. During infancy, subjects should undergo therapies to improve muscle strength. Speech and occupational therapy are also indicated. During the school years, children benefit from a highly structured learning environment and extra help. The largest problem associated with the syndrome is severe obesity. Access to food must be strictly supervised and limited, usually by installing locks on all food-storage places including refrigerators.[20] Physical activity in individuals with PWS for all ages is needed to optimize strength and promote a healthy lifestyle.[13]

Because of severe obesity, obstructive sleep apnea is a common sequela, and a positive airway pressure machine is often needed. A person who has been diagnosed with PWS may have to undergo surgical procedures. One surgery that has proven to be unsuccessful for treating the obesity is gastric bypass.[42]

Behavior and psychiatric problems should be detected early for the best results. These issues are best when treated with parental education and training. Sometimes medication is introduced, as well. Serotonin agonists have been most effective in lessening temper tantrums and improving compulsivity.[13] 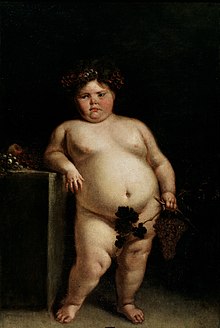 A 1680 painting by Juan Carreño de Miranda of Eugenia Martínez Vallejo, a girl presumed to have PWS[44]

Despite its rarity, PWS has been often referenced in popular culture, partly due to curiosity surrounding the insatiable appetite and obesity that are symptoms.

The syndrome has been depicted and documented several times in television. A fictional individual with PWS featured in the episode "Dog Eat Dog" of the television series CSI: Crime Scene Investigation, which aired in the US on 24 November 2005.[45] In July 2007 Channel 4 aired a 2006 documentary called Can't Stop Eating, surrounding the everyday lives of two people with PWS, Joe and Tamara.[46] In 2010 episode of Extreme Makeover: Home Edition, Sheryl Crow helped Ty Pennington rebuild a home for a family whose youngest son, Ethan Starkweather, was living with the syndrome.[47] In a 2012 episode of Mystery Diagnosis on the Discovery Health channel, Conor Heybach, who has Prader–Willi syndrome, shared how he was diagnosed with it.[48]