Angelman syndrome (AS) is a genetic disorder that mainly affects the nervous system.[7] Symptoms include a small head and a specific facial appearance, severe intellectual disability, developmental disability, speaking problems, balance and movement problems, seizures, and sleep problems.[7] Children usually have a happy personality and have a particular interest in water.[7] The symptoms generally become noticeable by one year of age.[7]

Angelman syndrome is due to a lack of function of part of chromosome 15 inherited from a person's mother.[7] Most of the time, it is due to a deletion or mutation of the UBE3A gene on that chromosome.[7] Occasionally, it is due to inheriting two copies of chromosome 15 from a person's father and none from their mother.[7] As the father's versions are inactivated by a process known as genomic imprinting, no functional version of the gene remains.[7] Angelman syndrome is typically due to a new mutation rather than one inherited from a person's parents.[7] Diagnosis is based on symptoms and possibly genetic testing.[8]

No cure is available.[8] Treatment is generally supportive in nature.[8] Anti-seizure medications are used in those with seizures.[8] Physical therapy and bracing may help with walking.[8] Those affected have a nearly normal life expectancy.[7]

AS affects 1 in 12,000 to 20,000 people.[7] Males and females are affected with equal frequency.[8] It is named after British pediatrician Harry Angelman, who first described the syndrome in 1965.[8][10] An older term, "happy puppet syndrome", is generally considered pejorative.[11] Prader–Willi syndrome is a separate condition, caused by a similar loss of the father's chromosome 15.[12]

The following text lists signs and symptoms of Angelman syndrome and their relative frequency in affected individuals.[13]

While Angelman syndrome can be caused by a single mutation in the UBE3A gene, the most common genetic defect leading to Angelman syndrome is a ~4Mb (megabase) maternal deletion in chromosomal region 15q11-13 causing an absence of UBE3A expression in the paternally imprinted brain regions. UBE3A codes for an E6-AP ubiquitin ligase, which chooses its substrates very selectively, and MAPK1, PRMT5, CDK1, CDK4, β-catenin, and UBXD8 have been identified as ubiquitination targets of this protein.[16]

The electroencephalogram (EEG) in AS is usually abnormal, more so than clinically expected.[17] This EEG facilitates the differential diagnosis of AS, but is not pathognomonic.[17][18] Three distinct interictal patterns are seen in these patients.[19] The most common pattern is a very large amplitude 2–3 Hz rhythm most prominent in prefrontal leads. Next most common is a symmetrical 4–6 Hz high voltage rhythm. The third pattern, 3–6 Hz activity punctuated by spikes and sharp waves in occipital leads, is associated with eye closure. Paroxysms of laughter have no relation to the EEG, ruling out this feature as a gelastic phenomenon.[17]

EEG anomalies may be used as a quantitative biomarkers to "chart progression of AS and as clinical outcome measures".[20] Slow delta activity (~3 Hz) is greatly increased in AS relative to typically developing children, yet more pronounced in children with partial 15q deletions as opposed to those with etiologies principally affecting UBE3A.[21] Theta activity (~5 Hz) is much greater in children with partial 15q deletions.[21] Thus, delta activity appears to be chiefly reflective of UBE3A dysfunction with some modulation from other 15q genes, whereas theta activity may be an electrophysiological readout of genes beyond UBE3A such as GABRA5, GABRB3, and GABRG3.[21] Future clinical trials in AS might exploit the foregoing by using EEG as a readout of drug target engagement.

It appears that the neurons of people with Angelman syndrome are formed correctly, but they cannot function properly.[citation needed]

The diagnosis of Angelman syndrome is based on:

Diagnostic criteria for the disorder were initially established in 1995 in collaboration with the Angelman syndrome Foundation (US);[22] these criteria underwent revision in 2005.[23]

Seizures are a consequence, but so is excessive laughter,[24] which is a major hindrance to early diagnosis.

Other conditions that can appear similar include:[8][9]

There is currently no cure available. The epilepsy can be controlled by the use of one or more types of anticonvulsant medications. However, there are difficulties in ascertaining the levels and types of anticonvulsant medications needed to establish control, because people with AS often have multiple types of seizures.[25] Many families use melatonin to promote sleep in a condition which often affects sleep patterns. Many individuals with Angelman syndrome sleep for a maximum of five hours at any one time[citation needed]. Mild laxatives are also used frequently to encourage regular bowel movements[citation needed]. Early intervention with physiotherapy is sometimes used to encourage joint mobility and prevent stiffening of the joints. Speech and Language Therapy is commonly employed to assist individuals with Angelman syndrome and their communication issues.

Those with the syndrome are generally happy and contented people who like human contact and play[citation needed]. People with AS exhibit a profound desire for personal interaction with others. Communication can be difficult at first, but as a child with AS develops, there is a definite character and ability to make themselves understood. People with AS tend to develop strong non-verbal skills to compensate for their limited use of speech. It is widely accepted that their understanding of communication directed to them is much larger than their ability to return conversation. Most affected people will not develop more than 5–10 words, if any at all.[26]

The severity of the symptoms associated with Angelman syndrome varies significantly across the population of those affected. Some speech and a greater degree of self-care are possible among the least profoundly affected. Walking and the use of simple sign language may be beyond the reach of the more profoundly affected. Early and continued participation in physical, occupational (related to the development of fine-motor control skills), and communication (speech) therapies are believed to significantly improve the prognosis (in the areas of cognition and communication) of individuals affected by AS. Further, the specific genetic mechanism underlying the condition is thought to correlate to the general prognosis of the affected person. On one end of the spectrum, a mutation to the UBE3A gene is thought to correlate to the least affected, whereas larger deletions on chromosome 15 are thought to correspond to the most affected.

The clinical features of Angelman syndrome alter with age. As adulthood approaches, hyperactivity and poor sleep patterns improve. The seizures decrease in frequency and often cease altogether and the EEG abnormalities are less obvious. Medication is typically advisable to those with seizure disorders. Often overlooked is the contribution of the poor sleep patterns to the frequency and/or severity of the seizures. Medication may be worthwhile to help deal with this issue and improve the prognosis with respect to seizures and sleep. Also noteworthy are the reports that the frequency and severity of seizures temporarily escalate in pubescent Angelman syndrome girls, but do not seem to affect long-term health.[citation needed]The facial features remain recognizable with age, but many adults with AS look remarkably youthful for their age.[citation needed]

Puberty and menstruation begin at around the average age. Sexual development is thought to be unaffected, as evidenced by a single reported case of a woman with Angelman syndrome conceiving a female child who also had Angelman syndrome.[27]

The majority of those with AS achieve continence by day and some by night. Angelman syndrome is not a degenerative syndrome, and thus people with AS may improve their living skills with support.

Dressing skills are variable and usually limited to items of clothing without buttons or zippers. Most adults can eat with a knife or spoon and fork, and can learn to perform simple household tasks. General health is fairly good and life-span near average. Particular problems which have arisen in adults are a tendency to obesity (more in females), and worsening of scoliosis[28] if it is present. The affectionate nature which is also a positive aspect in the younger children may also persist into adult life where it can pose a problem socially, but this problem is not insurmountable. 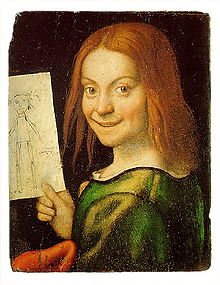 "Boy with a Puppet" or "A child with a drawing" by Giovanni Francesco Caroto.[31]

Harry Angelman, a pediatrician working in Warrington, England, first reported three children with this condition in 1965.[10] Angelman later described his choice of the title "Puppet Children" to describe these cases as being related to an oil painting he had seen while vacationing in Italy:

The history of medicine is full of interesting stories about the discovery of illnesses. The saga of Angelman's syndrome is one such story. It was purely by chance that nearly thirty years ago (e.g., circa 1964) three handicapped children were admitted at various times to my children's ward in England. They had a variety of disabilities and although at first sight they seemed to be suffering from different conditions I felt that there was a common cause for their illness. The diagnosis was purely a clinical one because in spite of technical investigations which today are more refined I was unable to establish scientific proof that the three children all had the same handicap. In view of this I hesitated to write about them in the medical journals. However, when on holiday in Italy I happened to see an oil painting in the Castelvecchio Museum in Verona called ... a Boy with a Puppet. The boy's laughing face and the fact that my patients exhibited jerky movements gave me the idea of writing an article about the three children with a title of Puppet Children. It was not a name that pleased all parents but it served as a means of combining the three little patients into a single group. Later the name was changed to Angelman syndrome. This article was published in 1965 and after some initial interest lay almost forgotten until the early eighties.

Case reports from the United States first began appearing in the medical literature in the early 1980s.[33][34] In 1987, it was first noted that around half of the children with AS have a small piece of chromosome 15 missing (chromosome 15q partial deletion).[35]

Many poems in Richard Price's poetry collections Hand Held (1997), Lucky Day (2005), and Small World (2012) reflect on the disability of the poet's daughter, who has Angelman syndrome. In the 2011 Philippine drama series Budoy, the titular character and main protagonist Budoy Maniego (played by Filipino actor Gerald Anderson) is diagnosed with Angelman syndrome.[citation needed]

Topoisomerase inhibitors are under research as of 2017.[36]