From WikiProjectMed
(Redirected from IUD with progestogen)
Jump to navigation Jump to search
This article is about hormone-based IUDs. For copper-based, see Copper IUDs.

Intrauterine system (IUS) with progestogen, sold under the brand name Mirena among others, is an intrauterine device that releases the hormone levonorgestrel into the uterus.[2] It is used for birth control, heavy menstrual periods, and to prevent excessive build of the lining of the uterus in those on estrogen replacement therapy.[2] It is one of the most effective forms of birth control with a one-year failure rate around 0.2%.[1] The device is placed in the uterus and lasts three to seven years.[3][4] Fertility often returns quickly following removal.[2]

Side effects include irregular periods, benign ovarian cysts, pelvic pain, and depression.[2] Rarely uterine perforation may occur.[2] Use is not recommended during pregnancy but is safe with breastfeeding.[2] The IUD with progestogen is a type of long-acting reversible birth control.[5] It works by thickening the mucus at the opening of the cervix, stopping the buildup of the lining of the uterus, and occasionally preventing ovulation.[2]

The IUD with levonorgestrel was first approved for medical use in 1990 in Finland and in the United States in 2000.[6] It is on the World Health Organization's List of Essential Medicines, the safest and most effective medicines needed in a health system.[7] The wholesale cost in the developing world is about US$122.46 each.[8] In the United Kingdom they cost the NHS about £88.[2] In the United States they cost around US$844.00,[9] More than 120 countries have approved the device and it is used by more than 10 million women.[6][10]

In addition to birth control, hormonal IUD are used for prevention and treatment of:

The hormonal IUD is considered to be more effective than other common forms of reversible contraception, such as the birth control pill, because it requires little action by the user after insertion.[16] The effectiveness of other forms of birth control is mitigated (decreased) by the users themselves. If medication regimens for contraception are not followed precisely, the method becomes less effective. IUDs require no daily, weekly, or monthly regimen, so their typical use failure rate is therefore the same as their perfect use failure rate.[16]

In women with bicornuate uterus and in need of contraception, two IUDs are generally applied (one in each horn) due to lack of evidence of efficacy with only one IUD.[29] Evidence is lacking regarding progestogen IUD usage for menorrhagia in bicornuate uterus, but a case report showed good effect with a single IUD for this purpose.[30]

Some degree of bleeding occurs on average in 36 out of the 90 first days after the IUD is placed.[31] The number of days of bleeding than decreases on average to 19, 14, and 12 days over each subsequent three month period.[31]

Progestogen-only contraceptives such as an IUD are not believed to affect milk supply or infant growth.[32] However, a study in the Mirena application for FDA approval found a lower continuation of breastfeeding at 75 days in hormonal IUD users (44%) versus copper IUD users (79%).[33]

When using Mirena, about 0.1% of the maternal dose of levonorgestrel can be transferred via milk to the nursed infant.[34] A six-year study of breastfed infants whose mothers used a levonorgestrel-only method of birth control found the infants had increased risk of respiratory infections and eye infections, though a lower risk of neurological conditions, compared to infants whose mothers used a copper IUD.[35] No longer-term studies have been performed to assess the long-term effects on infants of levonorgestrel in breast milk.

There are conflicting recommendations about use of Mirena while breastfeeding. The U.S. CDC does not recommend any hormonal method as a first choice of contraceptive for nursing mothers, although progestin-only methods, including IUDs may be used with close follow-up or when the benefits outweigh the risks.[36] The World Health Organization recommends against immediate postpartum insertion, citing increased expulsion rates. It also reports concerns about potential effects on the infant's liver and brain development in the first six weeks postpartum. However, it recommends offering Mirena as a contraceptive option beginning at six weeks postpartum even to nursing women.[37] Planned Parenthood offers Mirena as a contraceptive option for breastfeeding women beginning at four weeks postpartum.[38]

A hormonal IUD should not be used by women who:

Insertion of an IUD is acceptable after a D&E abortion (second-trimester abortion), but may be associated with a higher expulsion rate.[41] To reduce the risk of infection, insertion of an IUD is not recommended for women that have had a medical abortion but have not yet had an ultrasound to confirm that the abortion was complete, or that have not yet had their first menstruation following the medical abortion.[38]

Progesterone is a hormone in the endometrium that counteracts estrogen driven growth.[61] Very low levels of progesterone will cause estrogen to act more, leading to endometrial hyperplasia and adenocarcinoma.[61] These effects can be minimized if treated with progestin, but not in very many cases.

No evidence has been identified to suggest Mirena affects bone mineral density (BMD).[62] Two small studies, limited to studying BMD in the forearm, show no decrease in BMD.[63][64] One of the studies showed at seven years of use, similar BMD at the midshaft of the ulna and at the distal radius as nonusers matched by age and BMI.[63] In addition, BMD measurements were similar to the expected values for women in the same age group as the participants. The authors of the study said their results were predictable, since it is well established that the main factor responsible for bone loss in women is hypoestrogenism, and, in agreement with previous reports, they found estradiol levels in Mirena users to be normal.[63] 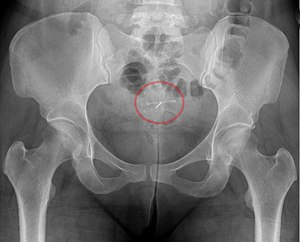 The hormonal IUD is a small 'T'-shaped piece of plastic, which contains levonorgestrel, a type of progestin.[27] The cylinder of the device is coated with a membrane that regulates the release of the drug.[65] Bayer markets Skyla as Jaydess in the United Kingdom.[66] Jaydess releases six micrograms per day and lasts for three years.[67] In comparison, oral contraceptives can contain 150 micrograms of levonorgestrel.[46] The hormonal IUD releases the levonorgestrel directly into the uterus, as such its effects are mostly paracrine rather than systemic. Most of the drug stays inside the uterus, and only a small amount is absorbed into the rest of the body.[46] 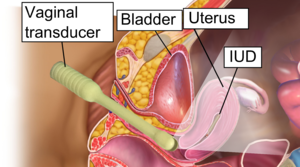 Schematic depiction of vaginal ultrasonography of a Mirena. 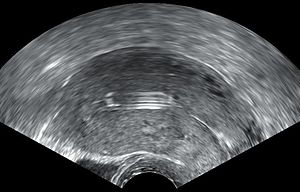 Vaginal ultrasonography showing a Mirena in optimal place in the uterus, as viewed from angle shown in schematic depiction.

The hormonal IUD is inserted in a similar procedure to the nonhormonal copper IUD, and can only be inserted by a qualified medical practitioner.[46] Before insertion, a pelvic exam is performed to examine the shape and position of the uterus. A current STI at the time of insertion can increase the risk of pelvic infection.[68] However, routine screening for gonorrhea and chlamydia prior to insertion is not recommended.[69] If a person needs screening and there is no evidence of infection on examination or has been previously screened, insertion of the IUD does not need to be delayed.[70]

During the insertion, the vagina is held open with a speculum, the same device used during a pap smear.[46] A grasping instrument is used to steady the cervix, the length of the uterus is measured for proper insertion with a uterine sound for decreasing chance of uterine perforation with the IUD, and the IUD is placed using a narrow tube through the opening of the cervix into the uterus.[46] A short length of monofilament plastic/nylon string hangs down from the cervix into the vagina. The string allows physicians and patients to check to ensure the IUD is still in place and enables easy removal of the device.[46] Mild to moderate cramping can occur during the procedure, which generally takes five minutes or less. Insertion can be performed immediately postpartum and post-abortion if no infection has occurred.[17]

Misoprostol is not effective in reducing pain in IUD insertion.[71]

Removal of the device should also be performed by a qualified medical practitioner. After removal, fertility will return to previous levels relatively quickly.[72] One study found that the majority of participants returned to fertility within three months.[73]

Levonorgestrel is a progestogen, i.e. progesterone-receptor agonist. The hormonal IUD's primary mechanism of action is to prevent fertilization.[46][74][75][76][77] The levonorgestrel intrauterine system has several contraceptive effects, although thickening of the cervical mucus appears to be the primary effect.[22] Other effects include making the inside of the uterus becomes fatal to sperm[76][78] and thinning of the endometrial lining, but this is not the usual function.[79][80]

Numerous studies have demonstrated that IUDs primarily prevent fertilization, not implantation.[46] In one experiment involving tubal flushing, fertilized eggs were found in half of women not using contraception, but no fertilized eggs were found in women using IUDs.[82] IUDs also decrease the risk of ectopic pregnancy, which further implies that IUDs prevent fertilization.[46]

Hormonal IUDs were developed in the 1970s following the development of the copper IUD in the 1960s and 1970s.[83] Dr. Antonio Scommenga, working at the Michael Reese Hospital in Chicago, discovered that administering progesterone inside the uterus could have contraceptive benefits.[83] With knowledge of Scommegna's work, a Finnish doctor, Jouni Valtteri Tapani Luukkainen, created the 'T'-shaped IUD that released progesterone, marketed as the Progestasert System in 1976. This IUD had a short, 1-year lifespan and never achieved widespread popularity. Following this relative lack of success, Dr. Luukkainen replaced the progesterone with the hormone levonorgestrel to be released over a five-year period, creating what is now Mirena.[84]

The Mirena IUD was studied for safety and efficacy in two clinical trials in Finland and Sweden involving 1,169 women who were all between 18 and 35 years of age at the beginning of the trials. The trials included predominantly Caucasian women who had been previously pregnant with no history of ectopic pregnancy or pelvic inflammatory disease within the previous year. Over 70% of the participants had previously used IUDs.[85]

In 2013 Skyla, a lower dose levonorgestrel IUD effective for up to three years, was approved by the FDA.[86] Skyla has a different bleeding pattern than Mirena, with only 6% of women in clinical trials becoming amenorrheic (compared to approximately 20% with Mirena).