Poland syndrome is a birth defect characterized by an underdeveloped chest muscle and short webbed fingers on one side of the body.[3][1] Short ribs, less fat, and breast and nipple abnormalities may also occur on that side.[1] Typically the right side is involved.[3] People generally have normal movement and health.[1]

The cause is unknown.[1] One theory is that it is due to disruption of blood flow during development before birth.[1] The condition is generally not inherited from a person's parents.[1] No genes that contribute to the disorder have been identified.[1] Diagnosis is based on symptoms.[4] Often people remain undiagnosed and some may not realize they are affected until puberty.[3]

Treatment depends on the severity and may include surgical correction.[3] About 1 in 20,000 newborns are affected.[1] Males are affected twice as often as females.[1] It is named after Alfred Poland who described the condition when he was a student in 1841.[4][5] 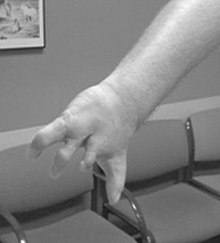 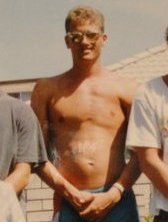 A list of the common side effects broken down by frequency.[3]

It is usually considered a unilateral condition. Some have claimed that the term can be applied in bilateral presentation,[6] but others recommend using alternate terminology in those cases.[1]

The cause of Poland syndrome is unknown. However, an interruption of the embryonic blood supply to the arteries that lie under the collarbone (subclavian arteries) at about the 46th day of embryonic development is the prevailing theory.[7]

The subclavian arteries normally supply blood to embryonic tissues that give rise to the chest wall and hand. Variations in the site and extent of the disruption may explain the range of signs and symptoms that occur in Poland syndrome. Abnormality of an embryonic structure called the apical ectodermal ridge, which helps direct early limb development, may also be involved in this disorder.[8]

Mammogram showing absence of the pectoralis major muscle and distortion on the left side. Right side is normal.

Poland syndrome is usually diagnosed at birth, based upon the physical characteristics. Imaging techniques such as a CT scan may reveal the extent to which the muscles are affected.[9] The syndrome varies in severity and as such is often not reported until puberty, when lopsided growth becomes apparent.[10]

The complete or partial absence of the pectoralis muscle is the malformation that defines Poland syndrome. It can be treated by inserting a custom implant designed by CAD (computer aided design).[11] A 3D reconstruction of the patient's chest is performed from a medical scanner to design a virtual implant perfectly adapted to the anatomy of each one.[12] The implant is made of medical silicone unbreakable rubber. This treatment is purely cosmetic and does not make up for the patient's imbalanced upper body strength.

The Poland syndrome malformations being morphological, correction by custom implant is a first-line treatment.[13] This technique allows a wide variety of patients to be treated with good outcomes. Poland Syndrome can be associated with bones, subcutaneous and mammary atrophy: if the first, as for pectus excavatum, is successfully corrected by a custom implant, the others can require surgical intervention such as lipofilling or silicone breast implant, in a second operation.

The surgery takes place under general anaesthesia and lasts less than 1 hour. The surgeon prepares the locus to the size of the implant after performing an 8-cm axillary incision and inserts the implant beneath the skin. The closure is made in two planes.

The implant will replace the pectoralis major muscle, thus enabling the thorax to be symmetrical and, in women, the breast as well. If necessary, especially in the case of women, a second operation will complement the result by the implantation of a breast implant and / or lipofilling.

Lipomodelling is progressively used in the correction of breast and chest wall deformities. In Poland syndrome, this technique appears to be a major advance that will probably revolutionize the treatment of severe cases. This is mainly due to its ability to achieve previously unachievable quality of reconstruction with minimal scarring.[14]

Poland syndrome affects males three times as often as females and affects the right side of the body twice as often as the left.[15] The incidence is estimated to range from one in 7,000 to one in 100,000 live births.[16]

It was first named in 1962 by Patrick Clarkson, a New Zealand-born British plastic surgeon working at Guy's Hospital and Queen Mary's Hospital, London. He noticed that three of his patients had both a hand deformity and an underdeveloped breast on the same side. He discussed this with his colleague at Guy's Hospital, Dr Philip Evans, who agreed that the syndrome was "not widely appreciated". Clarkson found a reference to a similar deformity published by Alfred Poland, over a hundred years earlier in Guy's Hospital reports, in 1841.[17] Clarkson was able to find the hand specimen dissected by Poland, which was still held in the hospital pathology museum.

Poland had dissected a convict known as George Elt, who was said to be unable to draw his hand across his chest. Poland noted the chest wall deformity, and this was illustrated in his article; the hand was also dissected and preserved for posterity in Guy's Hospital museum where it remains today. It cannot be truly said that Poland described this syndrome because he only described one isolated case. Clarkson published his series of three cases and named the syndrome after Poland in his article.[18] According to the National Institute of Healh, Poland Syndrome affects 1 in 20,000 newborns (more males than females).[19]