Cleidocranial dysostosis (CCD), also called cleidocranial dysplasia, is a birth defect that mostly affects the bones and teeth.[1] The collarbones are typically either poorly developed or absent, which allows the shoulders to be brought close together.[1] The front of the skull often does not close until later, and those affected are often shorter than average.[1] Other symptoms may include a prominent forehead, wide set eyes, abnormal teeth, and a flat nose.[1] Symptoms vary among people; however, intelligence is typically unaffected.[1]

The condition is either inherited from a person's parents or occurs as a new mutation.[1] It is inherited in an autosomal dominant manner.[1] It is due to a defect in the RUNX2 gene which is involved in bone formation.[1] Diagnosis is suspected based on symptoms and X-rays with confirmation by genetic testing.[4] Other conditions that can produce similar symptoms include mandibuloacral dysplasia, pyknodysostosis, osteogenesis imperfecta, and Hajdu-Cheney syndrome.[5]

Treatment includes supportive measures such as a device to protect the skull and dental care.[5] Surgery may be performed to fix certain bone abnormalities.[4] Life expectancy is generally normal.[3]

It affects about one per million people.[1] Males and females are equally commonly affected.[5] Modern descriptions of the condition date to at least 1896.[6] The term is from cleido meaning collarbone, cranial from the Greek κρανιὀς meaning skull, and dysostosis meaning formation of abnormal bone.[7] 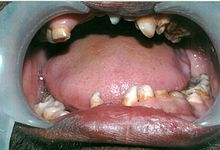 Mouth showing many over-retained deciduous teeth and some missing teeth.

Cleidocranial dysostosis is a general skeletal condition[8] so named from the collarbone (cleido-) and cranium deformities which people with it often have.

People with the condition usually present with a painless swelling in the area of the clavicles at 2–3 years of age.[9] Common features are:

It is usually autosomal dominant, but in some cases the cause is not known.[17] It occurs due to haploinsufficiency caused by mutations in the CBFA1 gene (also called Runx2), located on the short arm of chromosome 6, which encodes transcription factor required for osteoblast differentiation.[10] It results in delayed ossification of midline structures of the body, particularly membranous bone.

A new article reports that the CCD cause is thought to be due to a CBFA1 (core binding factor activity 1) gene defect on the short arm of chromosome 6p21 . CBFA1 is vital for differentiation of stem cells into osteoblasts, so any defect in this gene will cause defects in membranous and endochondral bone formation.[18]

Different features of the dysostosis are significant. Radiological imaging helps confirm the diagnosis. During gestation (pregnancy), clavicular size can be calculated using available nomograms. Wormian bones can sometimes be observed in the skull.[19]

Diagnosis of CCD spectrum disorder is established in an individual with typical clinical and radiographic findings and/or by the identification of a heterozygous pathogenic variant in RUNX2 (CBFA1).[20]

Around 5 years of age, surgical correction may be necessary to prevent any worsening of the deformity.[9] If the mother has dysplasia, caesarian delivery may be necessary. Craniofacial surgery may be necessary to correct skull defects.[19] Coxa vara is treated by corrective femoral osteotomies. If there is brachial plexus irritation with pain and numbness, excision of the clavicular fragments can be performed to decompress it.[10] In case of open fontanelle, appropriate headgear may be advised by the orthopedist for protection from injury.

Several studies have reported that life expectancy appears to be normal for people with CCD.[3][21][22]

Cleidocranial dysostosis affects about one per million people.[1]

In 1987, a young girl named Jessica McClure fell down a narrow well pipe in her family's Texas property. Ron Short, a roofing contractor who was born without collarbones because of cleidocranial dysostosis and thus could collapse his shoulders to work in cramped corners, arrived at the site and offered to go down the shaft. The rescuers did not end up using him,[23][24] though McClure was successfully recovered from the well.

Child actor Gaten Matarazzo was born with cleidocranial dysplasia, which is incorporated into his character Dustin Henderson's storyline on Stranger Things.[25]

Sibling actress-singers Abigail and Milly Shapiro were born with cleidocranial dysplasia, a trait they share with their mother.[26][27]