Methemoglobinemia is a condition of elevated methemoglobin in the blood.[2] Symptoms may include headache, dizziness, shortness of breath, nausea, poor muscle coordination, and blue-colored skin (cyanosis).[2] Complications may include seizures and heart arrhythmias.[3]

Methemoglobinemia can be due to certain medications, chemicals, or food or it can be inherited from a person's parents.[2] Substances involved may include benzocaine, nitrates, or dapsone.[3] The underlying mechanism involves some of the iron in hemoglobin being converted from the ferrous [Fe2+] to the ferric [Fe3+] form.[3] The diagnosis is often suspected based on symptoms and a low blood oxygen that does not improve with oxygen therapy.[3] Diagnosis is confirmed by a blood gas.[3]

Treatment is generally with oxygen therapy and methylene blue.[3] Other treatments may include vitamin C, exchange transfusion, and hyperbaric oxygen therapy.[3] Outcomes are generally good with treatment.[3] Methemoglobinemia is relatively uncommon, with most cases being acquired rather than genetic.[3] 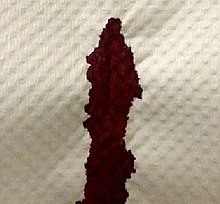 Chocolate-brown blood due to methemoglobinemia

People with severe methemoglobinemia (methemoglobin level above 50%) may exhibit seizures, coma, and death (level above 70%).[4] Healthy people may not have many symptoms with methemoglobin levels below 15%. However, patients with co-morbidities such as anemia, cardiovascular disease, lung disease, sepsis, or presence of other abnormal hemoglobin species (e.g. carboxyhemoglobin, sulfhemoglobin or sickle hemoglobin) may experience moderate to severe symptoms at much lower levels (as low as 5–8%).[citation needed]

Infants under 6 months of age have lower levels of a key methemoglobin reduction enzyme (NADH-cytochrome b5 reductase) in their red blood cells. This results in a major risk of methemoglobinemia caused by nitrates ingested in drinking water,[10] dehydration (usually caused by gastroenteritis with diarrhea), sepsis, or topical anesthetics containing benzocaine or prilocaine. Nitrates used in agricultural fertilizers may leak into the ground and may contaminate well water. The current EPA standard of 10 ppm nitrate-nitrogen for drinking water is specifically set to protect infants.[10] Benzocaine applied to the gums or throat (as commonly used in baby teething gels, or sore throat lozenges) can cause methemoglobinemia.[11][12]

The congenital form of methemoglobinemia has an autosomal recessive pattern of inheritance.

Due to a deficiency of the enzyme diaphorase I (NADH-cytochrome b5 reductase), methemoglobin levels rise and the blood of met-Hb patients has reduced oxygen-carrying capacity. Instead of being red in color, the arterial blood of met-Hb patients is brown. This results in the skin of Caucasian patients gaining a bluish hue. Hereditary met-Hb is caused by a recessive gene. If only one parent has this gene, offspring will have normal-hued skin, but if both parents carry the gene, there is a chance the offspring will have blue-hued skin.[citation needed]

Another cause of congenital methemoglobinemia is seen in patients with abnormal hemoglobin variants such as hemoglobin M (HbM), or hemoglobin H (HbH), which are not amenable to reduction despite intact enzyme systems.[citation needed]

The affinity for oxygen of ferric iron is impaired. The binding of oxygen to methemoglobin results in an increased affinity for oxygen in the remaining heme sites that are in ferrous state within the same tetrameric hemoglobin unit.[13] This leads to an overall reduced ability of the red blood cell to release oxygen to tissues, with the associated oxygen–hemoglobin dissociation curve therefore shifted to the left. When methemoglobin concentration is elevated in red blood cells, tissue hypoxia may occur.[14]

Normally, methemoglobin levels are <1%, as measured by the CO-oximetry test. Elevated levels of methemoglobin in the blood are caused when the mechanisms that defend against oxidative stress within the red blood cell are overwhelmed and the oxygen carrying ferrous ion (Fe2+) of the heme group of the hemoglobin molecule is oxidized to the ferric state (Fe3+). This converts hemoglobin to methemoglobin, resulting in a reduced ability to release oxygen to tissues and thereby hypoxia. This can give the blood a bluish or chocolate-brown color. Spontaneously formed methemoglobin is normally reduced (regenerating normal hemoglobin) by protective enzyme systems, e.g., NADH methemoglobin reductase (cytochrome-b5 reductase) (major pathway), NADPH methemoglobin reductase (minor pathway) and to a lesser extent the ascorbic acid and glutathione enzyme systems. Disruptions with these enzyme systems lead to methemoglobinemia.Hypoxia occurs due to the decreased oxygen-binding capacity of methemoglobin, as well as the increased oxygen-binding affinity of other subunits in the same hemoglobin molecule, which prevents them from releasing oxygen at normal tissue oxygen levels.[citation needed] 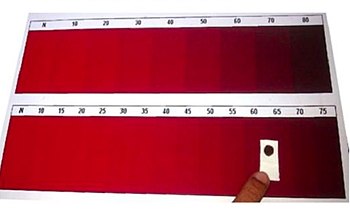 Other conditions that can cause bluish skin include argyria, sulfhemoglobinemia, and heart failure.[3] 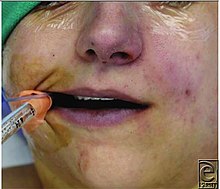 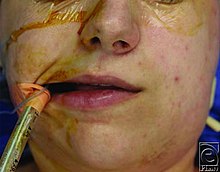 Methemoglobinemia can be treated with supplemental oxygen and methylene blue.[15] Methylene blue is given as a 1% solution (10 mg/ml) 1 to 2 mg/kg administered intravenously slowly over five minutes. Although the response is usually rapid, the dose may be repeated in one hour if the level of methemoglobin is still high one hour after the initial infusion. Methylene blue inhibits monoamine oxidase, and serotonin toxicity can occur if taken with an SSRI (selective serotonin reuptake inhibitor) medicine.[16]

Methylene blue restores the iron in hemoglobin to its normal (reduced) oxygen-carrying state. This is achieved by providing an artificial electron acceptor (such as methylene blue or flavin) for NADPH methemoglobin reductase (RBCs usually don't have one; the presence of methylene blue allows the enzyme to function at 5× normal levels).[17] The NADPH is generated via the hexose monophosphate shunt.

Genetically induced chronic low-level methemoglobinemia may be treated with oral methylene blue daily. Also, vitamin C can occasionally reduce cyanosis associated with chronic methemoglobinemia, and may be helpful in settings in which methylene blue is unavailable or contraindicated (e.g., in an individual with G6PD deficiency).[18] Diaphorase (cytochrome b5 reductase) normally contributes only a small percentage of the red blood cell's reducing capacity, but can be pharmacologically activated by exogenous cofactors (such as methylene blue) to five times its normal level of activity.

Methemoglobinemia mostly affects infants under 6 months of age (particularly those under 4 months) due to low hepatic production of methemoglobin reductase.[19][20] The most at-risk populations are those with water sources high in nitrates, such as wells and other water that's not monitored or treated by a water treatment facility. The nitrates can be hazardous to the infants.[21][22] The link between blue baby syndrome in infants and high nitrate levels is well established for waters exceeding the normal limit of 10 mg/L.[23][24] However, there is also evidence that breastfeeding is protective in exposed populations.[25]

The Fugates, a family that lived in the hills of Kentucky, had the hereditary form. They are known as the "Blue Fugates".[26] Martin Fugate and Elizabeth Smith, who had married and settled near Hazard, Kentucky in around 1800, were both carriers of the recessive methemoglobinemia (met-H) gene, as was a nearby clan with whom the Fugates descendants intermarried. As a result, many descendants of the Fugates were born with met-H.[27][28][29][30]

The "blue men of Lurgan" were a pair of Lurgan men suffering from what was described as "familial idiopathic methaemoglobinaemia" who were treated by Dr. James Deeny in 1942. Deeny, who would later become the Chief Medical Officer of the Republic of Ireland, prescribed a course of ascorbic acid and sodium bicarbonate. In case one, by the eighth day of treatments there was a marked change in appearance, and by the twelfth day of treatment the patient's complexion was normal. In case two, the patient's complexion reached normality over a month-long duration of treatment.[31]