Epiploic appendagitis (EA) is an inflammatory process of the epiploic appendices.[2] Symptoms generally include an area of pain and tenderness in the abdomen.[2] While the pain most commonly occurs on the persons left, any region of the abdomen may be involved.[2] There is sometimes also nausea or vomiting.[2]

Risk factors include obesity, weight loss, and significant exercise.[2][1] The underlying mechanism typically occurs due to twisting or venous thrombosis.[2] Diagnosis is by CT scan or ultrasound.[2] Lab tests are generally normal.[2] It may present similar to appendicitis, diverticulitis, or cholecystitis.[2]

The condition is generally self-limiting.[2] Pain may be managed with NSAIDs.[2] Rarely antibiotics or surgery may be used.[2] The condition is none serious and generally improves after a few days to weeks.[2][1]

Epiploic appendagitis is believed to be rare, with its exact frequency being unknown.[2] Those affected are generally adults, with the most common onset around 40 years old.[2] Males are four times more commonly affected than females.[2][1] The condition was first described in 1956 by Dockerty.[2]

Epiploic appendagitis presents with an acute onset of pain, commonly in the left lower quadrant the symptoms. Diverticulitis manifests with evenly distributed lower abdominal pain accompanied with nausea, fever, and leukocytosis. People with acute epiploic appendagitis do not normally report a change in bowel habits, while a small number may have constipation or diarrhea.[3] The condition commonly occurs in people in their 40s and 50s predominantly in men. Epiploic appendagitis is often misdiagnosed.[3]

People with epiploic appendicitis describe having a localized, strong, non-migratory sharp pain after eating. People generally have tender abdomens as a symptom. Symptoms do not include fever, vomiting, or leukocytosis. The pain is typically located in the right or left lower abdominal quadrant. When there is pain in the right lower quadrant, it can mimic appendicitis; however, it more commonly mimics diverticulitis, with pain present on the left side.[3]

It is possible however uncommon for acute epiploic appendigitis to result in adhesion, bowel obstruction, intussusception, intraperitoneal loose body, peritonitis, or abscess formation.[3]

It is rare; however, possible for epiploic appendagitis to result in a peritoneal loose body. A peritoneal loose body is a free floating mass of dead fibrous tissue surrounded by several layers of calcification (deposit of calcium salts). The loose body is the result of torsed, infarcted or detached epiploic appendages that eventually become fibrotic (inflammation and scarring) masses. If the loose body becomes large enough it can cause urinary retention (inability to empty bladder) or bowel obstructions.[4] 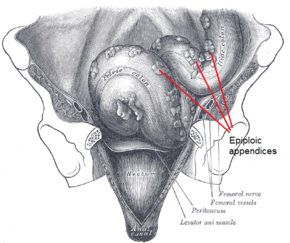 Location of some epiploic appendices on the bowel

Epiploic appendages are also called appendices epiploicae. The appendages themselves are 50–100 appendages that are oriented in two rows anterior and posterior. The appendages are parallel to the superficial section of the taenia coli. Furthermore, the appendages are between 0.5 and 5 cm long, each appendage is attached with one or two arterioles and a venule within vascular stalks attached to the colon. Torsion (twisting or wrenching motion) of the appendages can cause ischemia which can cause painful symptoms that mimic other conditions such as diverticulitis, and appendicitis; however, it is rare. The pain associated with the inflamed appendages is located in the left and sometimes in the right lower abdominal quadrant. Diagnosis of epiploic appendagitis can be challenging due to its infrequency.[5]

There are several conditions that mimic the symptoms of epiploic appendicitis.

Omental infarction: is uncommon reason for acute abdomen. It is similar to acute appendicitis. The pain is of a few days duration centering in the right lower or upper quadrant. Imaging is required to obtain an accurate diagnosis due to the common misdiagnosis of omental infarction as appendicitis or cholecystitis. Omental infarction occurs commonly in children approximately 15 percent of cases. The most frequent cause of non- torsion related omental infarction is due to trauma as well as thrombosis or the omental veins. The predisposition for omental infarction includes obesity, strenuous activity, congestive heart failure, digitalis administration, recent abdominal surgery and trauma.[3] "The typical CT findings are a solitary large non-enhancing omental mass with heterogeneous attenuation, which is most often located in the right lower quadrant, deep to the rectus abdominis muscle and either anterior to the transverse colon or anteromedial to the ascending colon".[3] Omental Infarction can be difficult to differentiate from diverticulitis however omental infarction is not normally attributed with bowel wall thickening. It is rare that the colonic wall will be thickened due to spread of the inflammation from the omentum (a fold of peritoneum connecting or supporting abdominal structures) to the tenia omentalis of the colon.[3]

Diverticulitis: normally happens in older people than in epiploic appendagitis. The two inflammatory conditions are quite indistinguishable based on physical manifestations. People with diverticulitis will present with nausea, vomiting, fever, elevated leukocyte count rebound tenderness, and will have more extensive lower abdominal pain than people with epiploic appendagitis. Additionally inflammation from diverticulitis may spread to the epiploic appendages making it difficult to diagnose, for inflammation of the appendices epiploicae may be resultant to other inflammatory conditions in the colonic wall and surrounding mesocolon.[3]

Epiploic appendagitis is self-limiting and can be managed conservatively with NSAIDs.[2] Under non invasive treatment, symptoms resolve in two weeks. Hospitalization is not necessary.[6] The inflammation of the epiploic appendages normally resolves on its own for most.

Epiploic appendagitis is more common in people older than 40 years of age; however, it can occur at any age. "The reported ages range from 12 to 82 years. Men are slightly more affected than woman."[3]