Streptomycin is an antibiotic used to treat a number of bacterial infections.[4] This includes tuberculosis, Mycobacterium avium complex, endocarditis, brucellosis, Burkholderia infection, plague, tularemia, and rat bite fever.[4] For active tuberculosis it is often given together with isoniazid, rifampicin, and pyrazinamide.[5] It is typically given by injection into muscle;[6] though may be given by injection into a vein.[3]

Common side effects include feeling like the world is spinning, vomiting, numbness of the face, fever, and rash.[4] Use during pregnancy may result in permanent deafness in the developing baby.[4] Use appears to be safe while breastfeeding.[5] It is not recommended in people with myasthenia gravis or other neuromuscular disorders.[5] Streptomycin is an aminoglycoside.[4] It works by blocking the ability of 30S ribosomal subunits to make proteins, which results in bacterial death.[4]

Streptomycin was discovered in 1943 from Streptomyces griseus.[7][8] It is on the World Health Organization's List of Essential Medicines.[9] The World Health Organization classifies it as critically important for human medicine.[10] The wholesale cost in the developing world is between US$0.38 and $4.39 per day.[11] In the United States, a course of treatment costs more than $200.[12] 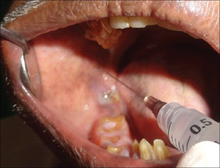 Streptomycin also is used as a fungicide, to combat the growth of bacteria beyond human applications. Streptomycin controls bacterial diseases of certain fruit, vegetables, seed, and ornamental crops. A major use is in the control of fireblight on apple and pear trees. As in medical applications, extensive use can be associated with the development of resistant strains. Streptomycin could potentially be used to control cyanobacterial blooms in ornamental ponds and aquaria.[13] While some antibacterial antibiotics are inhibitory to certain eukaryotes, this seems not to be the case for streptomycin, especially in the case of anti-fungal activity.[14]

Streptomycin can be used clinically to treat tuberculosis in combination with other medications and susceptible strains which cause bacterial endocarditis.[citation needed]

The most concerning side effects, as with other aminoglycosides, are kidney toxicity and ear toxicity.[15] Transient or permanent deafness may result. The vestibular portion of cranial nerve VIII (the vestibulocochlear nerve) can be affected, resulting in tinnitus, vertigo, ataxia, kidney toxicity, and can potentially interfere with diagnosis of kidney malfunction.[16]

Common side effects include vertigo, vomiting, numbness of the face, fever, and rash. Fever and rashes may result from persistent use.[citation needed]

It is not recommended in people with myasthenia gravis.[5]

Streptomycin is a protein synthesis inhibitor. It binds to the small 16S rRNA of the 30S subunit of the bacterial ribosome, interfering with the binding of formyl-methionyl-tRNA to the 30S subunit.[17] This leads to codon misreading, eventual inhibition of protein synthesis and ultimately death of microbial cells through mechanisms that are still not understood. Speculation on this mechanism indicates that the binding of the molecule to the 30S subunit interferes with 50S subunit association with the mRNA strand. This results in an unstable ribosomal-mRNA complex, leading to a frameshift mutation and defective protein synthesis; leading to cell death.[18] Humans have ribosomes which are structurally different from those in bacteria, so the drug does not have this effect in human cells. At low concentrations, however, streptomycin only inhibits growth of the bacteria by inducing prokaryotic ribosomes to misread mRNA.[19] Streptomycin is an antibiotic that inhibits both Gram-positive and Gram-negative bacteria,[20] and is therefore a useful broad-spectrum antibiotic.

Streptomycin was first isolated on October 19, 1943, by Albert Schatz, a PhD student in the laboratory of Selman Abraham Waksman at Rutgers University in a research project funded by Merck and Co.[21][22] Waksman and his laboratory staff discovered several antibiotics, including actinomycin, clavacin, streptothricin, streptomycin, grisein, neomycin, fradicin, candicidin, and candidin. Of these, streptomycin and neomycin found extensive application in the treatment of numerous infectious diseases. Streptomycin was the first antibiotic cure for tuberculosis (TB). In 1952 Waksman was the recipient of the Nobel Prize in Physiology or Medicine in recognition "for his discovery of streptomycin, the first antibiotic active against tuberculosis".[23] Waksman was later accused of playing down the role of Schatz who did the work under his supervision, claiming that Elizabeth Bugie had a more important role in its development.[24][25][26][27]

The Rutgers team reported streptomycin in the medical literature in January 1944.[28] Within months they began working with William Feldman and H. Corwin Hinshaw of the Mayo Clinic with hopes of starting a human clinical trial of streptomycin in tuberculosis.[29]: 209–241  The difficulty at first was even producing enough streptomycin to do a trial, because the research laboratory methods of creating small batches had not yet been translated to commercial large-batch production. They managed to do an animal study in a few guinea pigs with just 10 grams of the scarce drug, demonstrating survival.[29]: 209–241  This was just enough evidence to get Merck & Co. to divert some resources from the young penicillin production program to start work toward streptomycin production.[29]: 209–241

At the end of World War II, the United States Army experimented with streptomycin to treat life-threatening infections at a military hospital in Battle Creek, Michigan. The first person who was treated with streptomycin did not survive; the second person survived but became blind as a side effect of the treatment. In March 1946, the third person—Robert J. Dole, later Majority Leader of the United States Senate and Presidential nominee—experienced a rapid and robust recovery.[30]

The first randomized trial of streptomycin against pulmonary tuberculosis was carried out in 1946 through 1948 by the MRC Tuberculosis Research Unit under the chairmanship of Geoffrey Marshall (1887–1982). The trial was neither double-blind nor placebo-controlled.[31] It is widely accepted to have been the first randomised curative trial.[32]

Results showed efficacy against TB, albeit with minor toxicity and acquired bacterial resistance to the drug.[31]

Because streptomycin was isolated from a microbe discovered on New Jersey soil, and because of its activity against tuberculosis and Gram negative organisms, and in recognition of both the microbe and the antibiotic in the history of New Jersey, S. griseus was nominated as the Official New Jersey state microbe. The draft legislation was submitted by Senator Sam Thompson (R-12) in May 2017 as bill S3190 and Assemblywoman Annette Quijano (D-20) in June 2017 as bill A31900.[33][34]

Streptomycin, in combination with penicillin, is used in a standard antibiotic cocktail to prevent bacterial infection in cell culture.[citation needed]

When purifying protein from a biological extract, streptomycin sulfate is sometimes added as a means of removing nucleic acids. Since it binds to ribosomes and precipitates out of solution, it serves as a method for removing rRNA, mRNA, and even DNA if the extract is from a prokaryote.[citation needed]