Nystatin, sold under the brandname Mycostatin among others, is an antifungal medication.[1] It is used to treat Candida infections of the skin including diaper rash, thrush, esophageal candidiasis, and vaginal yeast infections.[1] It may also be used to prevent candidiasis in those who are at high risk.[1] Nystatin may be used by mouth, in the vagina, or applied to the skin.[1]

Common side effects when applied to the skin include burning, itching, and a rash.[1] Common side effects when taken by mouth include vomiting, and diarrhea.[1] During pregnancy use in the vagina is safe while other formulations have not been studied in this group.[1] It works by disrupting the cell membrane of the fungal cells.[1]

Nystatin was discovered in 1950 by Rachel Fuller Brown and Elizabeth Lee Hazen.[4] It was the first polyene macrolide antifungal.[5] It is on the World Health Organization's List of Essential Medicines.[6] It is available as a generic medication.[1] The wholesale price of the cream in the developing world is about US$0.70 per 30 gram tube.[7] In the United States a course of treatment costs less than US$25.[8] It is made from the bacterium Streptomyces noursei.[4] In 2017, it was the 230th most commonly prescribed medication in the United States, with more than two million prescriptions.[9][10]

Skin, vaginal, mouth, and esophageal Candida infections usually respond well to treatment with nystatin. Infections of nails or hyperkeratinized skin do not respond well.[11] It is available in many forms.

When given parenterally, its activity is reduced due to presence of plasma.[12]

Oral nystatin is often used as a preventive treatment in people who are at risk for fungal infections, such as AIDS patients with a low CD4+ count and people receiving chemotherapy. It has been investigated for use in patients after liver transplantation, but fluconazole was found to be much more effective for preventing colonization, invasive infection, and death.[13] It is effective in treating oral candidiasis in elderly people who wear dentures.[14]

Liposomal nystatin is not commercially available, but investigational use has shown greater in vitro activity than colloidal formulations of amphotericin B, and demonstrated effectiveness against some amphotericin B-resistant forms of fungi.[16] It offers an intriguing possibility for difficult-to-treat systemic infections, such as invasive aspergillosis, or infections that demonstrate resistance to amphotericin B. Cryptococcus is also sensitive to nystatin. Additionally, liposomal nystatin appears to cause fewer cases of and less severe nephrotoxicity than observed with amphotericin B.[16]

In the UK, its license for treating neonatal oral thrush is restricted to those over the age of one month.[citation needed]

It is prescribed in 'units', with doses varying from 100,000 units (for oral infections) to 1 million (for intestinal ones). As it is not absorbed from the gut, it is fairly safe for oral use and does not have problems of drug interactions. On occasion,[which?] serum levels of the drug can be identified from oral, vaginal, or cutaneous administration, and lead to toxicity.

Bitter taste and nausea are more common than most other side effects.[11]

The oral suspension form produces a number of adverse effects including but not limited to:[18]

Both the oral suspension and the topical form can cause:

Like amphotericin B and natamycin, nystatin is an ionophore.[21] It binds to ergosterol, a major component of the fungal cell membrane. When present in sufficient concentrations, it forms pores in the membrane that lead to K+ leakage, acidification, and death of the fungus.[22] Ergosterol is a sterol unique to fungi, so the drug does not have such catastrophic effects on animals or plants. However, many of the systemic/toxic effects of nystatin in humans are attributable to its binding to mammalian sterols, namely cholesterol. This is the effect that accounts for the nephrotoxicity observed when high serum levels of nystatin are achieved.

Nystatin A1 (or referred to as nystatin) is biosynthesized by a bacterial strain, Streptomyces noursei.[23] The structure of this active compound is characterized as a polyene macrolide with a deoxysugar D-mycosamine, an aminoglycoside.[23] The genomic sequence of nystatin reveals the presence of the polyketide loading module (nysA), six polyketide syntheses modules (nysB, nysC, nysI, nysJ, and nysK) and two thioesterase modules (nysK and nysE).[23] It is evident that the biosynthesis of the macrolide functionality follows the polyketide synthase I pathway.[24]

Following the biosynthesis of the macrolide, the compound undergoes post-synthetic modifications, which are aided by the following enzymes: GDP-mannose dehydratase (nysIII), P450 monooxygenase (nysL and nysN), aminotransferase (nysDII), and glycosyltransferase (nysDI).[23] The biosynthetic pathway is thought to proceed as shown to yield nystatin. 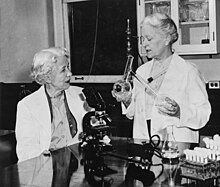 Like many other antifungals and antibiotics, nystatin is of bacterial origin. It was isolated from Streptomyces noursei in 1950 by Elizabeth Lee Hazen and Rachel Fuller Brown, who were doing research for the Division of Laboratories and Research of the New York State Department of Health. Hazen found a promising micro-organism in the soil of a friend's dairy farm. She named it Streptomyces noursei, after Jessie Nourse, the wife of the farm's owner.[26] Hazen and Brown named nystatin after the New York State Health Department in 1954.[27] The two discoverers patented the drug, and then donated the $13 million in profits to a foundation to fund similar research.[28] 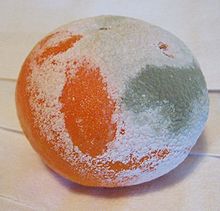 Penicillium-infected tangerine: The spot absent of growth had nystatin applied to it before the fungus covered the fruit.

It is also used in cellular biology as an inhibitor of the lipid raft-caveolae endocytosis pathway on mammalian cells, at concentrations around 3 μg/ml.

In certain cases, nystatin has been used to prevent the spread of mold on objects such as works of art. For example, it was applied to wood panel paintings damaged as a result of the Arno River Flood of 1966 in Florence, Italy.

Nystatin is also used as a tool by scientists performing "perforated" patch-clamp electrophysiologic recordings of cells. When loaded in the recording pipette, it allows for measurement of electrical currents without washing out the intracellular contents, because it forms pores in the cell membrane that are permeable to only monovalent ions.[29]

The original brandname was Fungicidin

A 30ml bottle of nystatin 100,000units/ml oral solution costs the UK's NHS less than £3.[31] The wholesale price of the cream in the developing world is about US$0.70 per 30 gram tube.[7] In the United States a course of treatment costs less than US$25.[8] In 2017, it was the 230th most commonly prescribed medication in the United States, with more than two million prescriptions.[10][9]